Peripapillary intrachoroidal cavitation (PICC) is a recently described lesion usually found at the inferior border of the peripapillary conus in highly myopic eyes. Its first mention dates back to the early 2000’s when Freund et al., using optical coherence tomography (OCT), described a localized detachment of the retinal pigment epithelium (RPE) and retina [1]. Therefore, it was initially referred as peripapillary detachment in pathologic myopia (PDPM). Toranzo et al., benefitting from advances in OCT technology, subsequently realized that this abnormality was actually located inside the choroid and that the underlying RPE and retina were normal, leading them to rename the lesion a peripapillary intrachoroidal cavitation, or PICC [2] .

On ophthalmoscopic examination, it generally appears like a well-defined, yellowish lesion located inferiorly along the border of the myopic crescent [1].

The exact prevalence of PICC is unknown at present. In the cohort considered by Choudhury et al., PICC had a prevalence ranging from 2,2% (all levels of myopia taken together) to 22% (when considering only high myopic patients) [3]. It was respectively identified in 4,9% and 16,9% of highly myopic eyes in Shimada’s [4] and You’s [5] studies.

This high variability in prevalence values may be attributed to the different diagnostic means and criteria used in these works, in which the study populations were not homogenous either. Taking these considerations into account, the actual prevalence of PICC is estimated to lie between 5 and 17% in highly myopic eyes [6].

Interest in PICC is quite new and the limited literature relating thereto does not allow to formally identify its specific risk factors.

High myopia appears to be the main predisposing factor. There is also a correlation between the prevalence of co-existing myopia-related retinal lesions (such as lacquer cracks, patchy atrophy, tessellation, …), structural modifications (posterior staphyloma,…) or optic disc changes (tilted disc, …) and the occurrence of PICC [4][5]. But while PICC is generally described in pathologic myopia, non-myopic eyes can also be affected [7], [8].

Older age seems to be a contributing factor as well [4] [9].

The exact etiopathogenesis of PICC is unclear.

Freund et al. initially suggested that, seen its location at the inferior border of the disc, it could be related to an early eye development anomaly and likened to an incomplete form of choroidal coloboma [10]. However, as PICC has not been described in children and can also develop in other locations, the congenital hypothesis has been abandoned.

It was proposed by Toranzo et al. that PICCs were the result of a choroid retraction away from the optic disc margin following a break in the border tissue of Elschnig during staphyloma progression in myopic eyes[2]. Wei et al. added that after the stretching and disruption of the border tissue at the edge of the myopic conus secondary to peripapillary staphyloma (PPS) progression, vitreous fluid could gain access into the choroid, creating a fluid pocket [11]. Additionally, studies using enhanced depth imaging demonstrated how PICC could occur by a mechanism of posterior scleral bowing, without retinal or RPE distortions, implying that PICC rather results from a posterior scleral movement and not an anterior retinal and RPE displacement [12].

It is commonly accepted that PICC probably finds its origin in biomechanical processes occurring around the optic nerve head (ONH). Highly myopic eyes may be more affected because of their overall thinner peripapillary tissues [13], rendering them more prone to deformations during intraocular pressure (IOP) fluctuations [14] or horizontal eye movements for example [15]. The study of Lee et al., who found that both abduction and adduction induced significant morphologic changes in the ONH, positively correlated with axial length (AL), supports this theory [16].

Recent works suggest that the combination of gamma peripapillary atrophy (gamma PPA) and a PPS is critical to PICC formation, a posterior scleral distortion secondary to the traction of the dura mater being a possible determinant element [17].

PICC in itself is asymptomatic [1]. 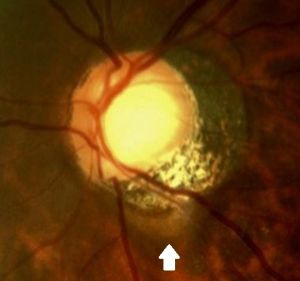 On fundus examination, PICC generally appears like a well-defined, yellow-orange lesion located inferiorly along the border of the myopic crescent [1]. Stereoscopic color fundus photographs may help in its detection (see Picture 1).

On OCT, PICC appear as intrachoroidal hyporeflective areas situated below the normal plane of RPE [2] [8], accompanied by a posterior outbowing of the sclera [12] (see Picture 2). Spaide et al. were even more specific in saying that in eyes with no inner retinal defect at the inferior border of the tilted optic disk, PICC could be described as triangular thickenings of the choroid with their base at the border of the optic nerve[5] [12].

OCT is more sensible than fundus pictures in PICC screening: indeed, only 46,7% to 53% of PICC documented on OCT sections are also detected on fundus examination [5] [8]. 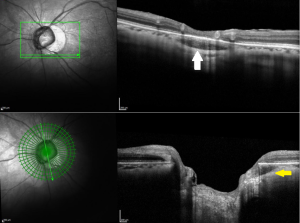 Picture 2. OCT of the same patient as in picture 1. Up. A horizontal linear OCT scan across the peripapillary region demonstrates a hyporeflective space (white arrow) under the intact retinal pigmentary epithelium. Down. On a radial scan, the PICC is seen as a choroidal hyporeflective space as well (yellow arrow); border tissue is absent. OCTs were made using the Spectralis® model S3300 (Heidelberg Engineering GmbH, Heidelberg, Germany).

It has been shown that highly myopic eyes with PICC had significantly lower peripapillary vessel densities on OCTA, especially in the temporal area, compared to those without [18]. In a case report, OCTA even demonstrated the absence of choroidal and choriocapillary network in the area corresponding to the PICC [19]. See picture 3.

Picture 3. OCTA of the same patient as in pictures 1 and 2. OCTA shots at the level of the choriocapillaris (A) and the choroid (B); 6x6 mm field of view centered on the papilla. The PICC appears as a hyporeflective area (yellow star), devoid of vascularization. Pictures obtained with the PLEX Elite® 9000 SS OCTA (Carl Zeiss Meditec AG, Jena, Germany).

On FA, PICC shows early hypofluorescence with progressive late staining, without any dye pooling. On ICGA, hypofluorescence of the lesion throughout the entire sequence is expected [20] [21].

The differential diagnosis for PICC includes [10] [24]:

PICC are considered nonprogressive entities and are not associated with visual changes through time [10]. The prognosis of eyes with PICC is thus mainly related to their associated degree of myopia and myopic complications.

Some case reports have been published, suggesting that PICC could promote retinoschisis [25] [26], macular detachment [25] [27] [28] and the formation of macular holes [29]. As these complications are also linked to pathologic myopia, it is though difficult to assess the exact involvement of PICC and the chronology of the damages.

As PICC is asymptomatic and tends to stay stable through time, no active intervention is indicated in their management. However, its recognition is important so that it is not confused with other fundus abnormalities which potentially necessitate further investigation (ARMD, CNV, tumors, …) [1]. It is also important to verify its presence in case of VF defects, so that the differential diagnosis with glaucoma can be assessed.

Surgery could be required in case of complications related to the pathologic myopia generally combined with the presence of PICC such as retinal detachment, CNV, retinoschisis, …