Photoscreening is a form of vision screening for children. It uses a camera to take images of a child’s undilated eyes. By looking at the configuration of the crescents of light returning after a flash (red reflex). The devices can estimate refractive error and determine which children are at risk of amblyopia (lazy eye). These images can be analyzed by a human interpreter, or by software incorporated into the equipment to evaluate the alignment of the eye and estimate refractive error. If significant refractive error or a misalignment appears to be present it can indicate amblyopia risk factors. If amblyopia risk factors are felt to be present a referral should be made for the child to be seen by a pediatric ophthalmologist for a cycloplegic examination. Photoscreening has advantages to more traditional eye chart acuity screening, and is particularly useful on younger (age 3-5), preverbal children (under age 3) and non-verbal children. Photoscreening usually takes less than a minute to obtain the necessary images on a child. The only cooperation required is for the child to briefly look at the camera.

Kaakinen first described eccentric photoscreening in 1979[1]. In 1983 the Otago photoscreener was described which used a 35mm single lens camera in which the light came from a narrow ring around the outer edge of the lens[1]. Maslin and Hope modified the photoscreener in which they reported on in 1990[2]. Their camera used 35 mm film and had two simultaneous off-axis linear flashes 90 degrees apart taking one photo. They minimized the distance between the flash and the entrance pupil in their device. In 1992, Freedman and Pressman described the Eyecor camera, a portable Polaroid based photoscreener using high-resolution instant film[3]. The use of instant film was a major innovation allowing for immediate evaluation of the image allowing for retake if the image was inadequate. In their device they separated the horizontal and vertical flash in time, taking two images, which were place on the same polaroid film. This was felt superior, as it was easier to interpret the effect from the horizontal and vertical flash elements on two separate photos rather than one composite image. Their device was later commercialized as the MTI photoscreener, which was first introduced in 1995[4]. The camera used instant film with an off axis flash which rotates 90 degrees between images. Two consecutive photos were taken on each patient resulting in a photograph showing the first image on the top and the 2nd image on the bottom printed on a special high-resolution Polaroid film. Based on the shape and size and location of the crescents a determination could be made as to whether the child has significant hyperopia, myopia, astigmatism or strabismus. Myopic crescents show on the same side of the flash while hyperopic crescents show opposite to the flash. In 2016, the American Association of Pediatrics put out a policy statement on visual assessment by pediatricians in which instrument-based vision screening is endorsed as a clinically valid method to detect conditions that may lead to amblyopia and/or strabismus. [5]

iScreen – The iScreen photoscreener was first introduced in 2006. The first generation of the device was an off-axis binocular photoscreener taking one image, which is electronically transmitted for remote interpretation. The first generation iScreen was a tabletop device in which the child rests their head against a chin rest. The iScreen 3000, introduced in 2011, has been significantly redesigned and miniaturized[6]. It is now a hand-held device, which takes 2 photos in rapid succession in 2 axes with a separation of 90 degrees. Aiming beams placed on the child’s forehead focus the camera. A blinking fixation light, and sound attract the child’s attention. The images are then taken in such rapid succession that the child perceives just one flash prior to a blink. This is an improvement over the analog MTI photoscreener which required lens rotation prior to taking the second photo, and prevents differential accommodative effort between photos. The photo can be reviewed immediately on the device and if the child is not fixating properly can be re-taken. The final image is sent electronically to the company for interpretation, which provides the advantage of a consistent, expert interpretation of the images. A report is emailed securely which shows the results of the test and reason for the referral and also includes a picture of the child’s eyes. 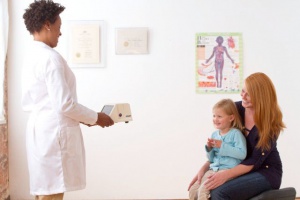 MTI – The MTI photoscreener was first introduced in 1995[4]. The camera uses special high resolution black and white polaroid style instant film with an off axis flash which rotates 90 degrees between images. Focus and fixation are similar to the iScreen with aiming beams and a flashing fixation target and noise to attract the child’s attention. Two consecutive photos are taken on each patient resulting in a photograph showing the first image on the top and the second image on the bottom printed on a special high-resolution instant film. Based on the shape, size and location of the crescents, a determination can be made as to whether the child has significant refractive error or strabismus. The MTI is no longer being manufactured but is still in use.

plusoptiX – The plusoptiX photoscreener was first commercially available in 1995[7]. The device uses an infrared video recorder to obtain images on 3 axes. The device produces a non-cycloplegic autorefractive reading, which is then compared to pre-set referral criteria. If the refractive values exceed the referral criteria the device will trigger a referral. The referral criteria are user modifiable. The device also creates a scatter plot of the location of the pupillary light reflex and a photographic image of the eyes. A printout is created with referral advice. The plusoptiX will also trigger a referral if one eye deviates by more than 10 degrees (suggesting strabismus) or if 2 round pupils cannot be seen (such as in a child with an iris coloboma, visually significant ptosis or if the child will not look at the camera). An advantage to the plusoptiX is the use of infrared light, which is not perceived by the child as a flash. This allows, the device to take a number of photos rather than just two. It does however take longer to acquire the image than the iScreen which can be an issue with an uncooperative child. The current plusoptiX is a desk-top self contained linux-based computer with a hand piece resembling a small radar gun attached. A monitor is provided to view the child during image acquisition. The child fixates on the Smiling “Lucy Face” while noises are playing to attract the child’s attention. The spinning infrared beams are also slightly visible which may further attract the child’s attention. The device gives audible and visual cues to the tester to focus the device and will not acquire the images until optimal focus is obtained. The device is based on originally on the Power Refactor. There have been three different variation of the plusoptiX marketed, the S04, S08 (screening models) and the S09 and A09 (autorefractor models). All function similarly with similar results. The plusoptiX is marketed currently by plusoptiX, but was previously co-marketed by Pediavision. 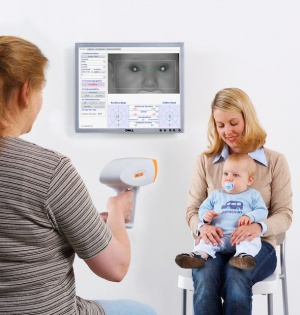 Spot – The Spot is a hand-held infrared digital photoscreener developed and marketed by Pediavision. It functions similarly to the plusoptiX, but has been significantly miniaturized. Rather than having the infrared elements on the face of the unit flanking the camera aperture, the Spot places the infrared elements below and in front of the camera aperture. The infrared light is then reflected off of a 45% two-way mirror. The design allows for eye tracking. The device creates a diagram with the location of the eyes, demonstrating any strabismus present as well as an autorefractive reading. Spot creates a report giving referral criteria based on preset criteria which can be printed. Visiscreen – The Visiscreen is a 35-mm camera with a databack recorder attached to a 500-mm telephoto lens. There is an electronic strobe light located below the lens and a flashing light-emitting diode located above the lens. The camera is mounted on bars ensuring it is exactly 8 feet and 3 inches away from a headrest the patient places their chin in.