Preeclampsia/eclampsia associated retinopathy refers to the retinal pathologies seen in the hypertensive disorders of pregnancy.

Preeclampsia is defined as new-onset hypertension after 20 weeks of gestation and proteinuria and/or evidence of end-organ compromise, including CNS symptoms (headache and/or visual changes), pulmonary edema, thrombocytopenia, renal insufficiency, or liver dysfunction.[1]

HELLP syndrome is on the severe spectrum of preeclampsia with severe systemic signs and is not specifically characterized as a separate entity by the American College of Obstetrics and Gynecologists (ACOG).[1]

Eclampsia is diagnosed with new-onset of generalized seizures in a woman with preeclampsia.[1]

Preeclampsia/eclampsia associated retinopathy is characterized by retinal arteriolar narrowing due to systemic hypertension and ischemia that may cause damage to the retinal and choroidal vasculature and to the retinal pigmented epithelium (RPE).

The visual system may be affected in 30–100% of patients with pre-eclampsia. The most common ocular finding is severe arteriolar spasm, evidenced by either segmental or generalized constriction of the retinal arterioles reported in 70% of cases of toxemia. 1–2% of patients who develop severe hypertension, proteinuria, and edema during the third trimester of pregnancy develop loss of vision as a result of serous retinal detachment. Retinal pigment epithelium damage and Purtscher's like retinopathy have been reported.[2][3][4]

In a report published by Lupton et al, normotensive pregnant women were followed with retinal vessel analysis and blood pressure measurements throughout gestation; he found that those who later developed preeclampsia had significant vessel attenuation early in gestation. [5] In pregnant women every 10-mmHg increase in mean arterial blood pressure was associated with a 1.9-μm reduction in retinal arteriolar caliber.

Preeclampsia is a systemic syndrome of pregnancy originating in the placenta. It is thought to be caused by inadequate placental cytotrophoblast invasion, followed by widespread maternal endothelial dysfunction.

Research has demonstrated that excess quantities of the antiangiogenic factors soluble fms-like tyrosine kinase 1 (sFlt1) and soluble endoglin (sEng) are released by the placenta into maternal blood, causing widespread endothelial dysfunction that results in hypertension, proteinuria, and other systemic manifestations of preeclampsia.

The diagnosis is made based on fundoscopy findings and patient history during pregnancy including a review of blood pressure levels along with kidney and liver function test levels.

The commonest ocular finding is severe arteriolar spasm, evidenced by either segmental or generalized constriction of the retinal arterioles reported in 70% of cases of preeclampsia/eclampsia and HELLP syndrome.

A branching pattern of yellow-white patches caused by focal necrosis of the RPE and outer retina may or may not be evident.

These patients may or may not show evidence of cotton-wool patches and hemorrhages in the retina. After delivery and treatment of the hypertension, the detachment rapidly resolves and recovery of visual function is relatively complete in most patients.

An irregular branching pattern of hyperpigmented dots (Elschnig spots), yellowish patches, and interconnecting lines of depigmentation of the RPE often remains in the juxtapapillary and macular area . These changes, caused by infarction of the RPE, are frequently symmetric in both eyes and, if initially detected on a routine eye examination years later, may be incorrectly interpreted as signs of a macular dystrophy.

Diagnosis is made based on fundoscopy findings along with patient pregnancy history of preeclampsia/eclampsia or HELLP syndrome. Ancillary test are helpful to confirm clinical diagnosis. Fundus and OCT images show significant macular subretinal fluid and subretinal deposits that resolves rapidly within days as the systemic hypertension improves. [6]

Angiography may demonstrate evidence of delayed perfusion of segments of the choroid as well as multiple pinpoint areas of leakage of dye through the RPE in the region of the subretinal yellow-white patches. The early fluorescein angiogram shows a delay in perfusion of the choriocapillaris from ischemia. Later, a multifocal reticular stain pattern is found over RPE damaged areas in the course of this entity.

The ophthalmic echography mode B ultrasound may be useful for the documentation and follow up of serous retinal detachment. 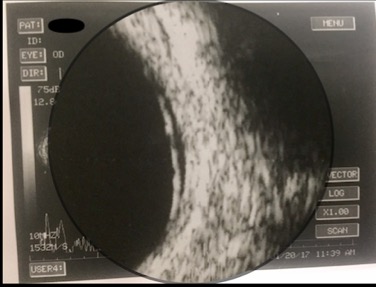 Usually no treatment is needed after delivery; however, steroids and anti hypertensive drugs have been reported in the treatment of this entity. The exudative retinopathy resolves as the underlying eclampsia is treated.

Patients with severe toxemia may develop profound visual loss and blindness secondary to total serous and hemorrhagic retinal detachment and be left following recovery with extensive degenerative changes in the RPE and retina that may simulate a diffuse tapetoretinal dystrophy. Correct diagnosis is important since the changes caused by toxemia are nonprogressive.

Cases with severe preeclampsia may be left with permanent visual loss, despite resolution of the serous retinal detachment due to extensive RPE necrosis.

For information about other ocular alterations during pregnancy, visit the following link: