Ophthalmologists should be aware of ESS in patients with ophthalmic complaints. PESS may be asymptomatic. SESS is often associated with treatment of a sellar lesion or increased intracranial pressure and the ophthalmic exam in these cases may show a visual field defect (e.g., bitemporal hemianopsia), optic atrophy, or papilledema.

Empty Sella Syndrome (ESS) is an anatomical condition characterized by an apparent lack of pituitary tissue contained within the sella turcica. This condition results from herniation of cerebrospinal fluid (CSF) into the sella, thereby compressing the pituitary gland above the sellar floor.[1] 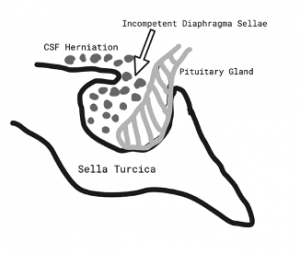 ESS can be further categorized as either primary empty sella syndrome (PESS) or secondary empty sella syndrome (SESS). PESS was first described by Busch in 1951 through the examination of autopsies of patients with flattened pituitary glands and no known history of pituitary disease.[1][2] PESS is an idiopathic condition often diagnosed through radiographic finding. In contrast to PESS, SESS results from an initial primary cause.

Less common than SESS, PESS is an idiopathic disorder that occurs most often from CSF herniating into the sella turcica presumably due to an incompetent diaphragma sellae (an extension of dura that normally covers the sella turcica, allowing the infundibulum to extend to the hypothalamus above).[1] This diaphragmatic incompetence can be found in up to 20% of normal population and is a fairly common incidental radiographic finding.[3] In contrast to PESS, SESS is a secondary disorder resulting from an underlying cause such as a treated pituitary tumor (most commonly trans-sphenoidal surgery). Other causes of SESS include elevated intracranial pressure including but not limited to pseudotumor cerebri, apoplexy (e.g., Sheehan syndrome), sellar radiation, pituitary infection, or pituitary autoimmune disease.[1] [3][4]

Risk factors for ESS include injury to the pituitary gland itself or the competency of the sella turcica. Factors that cause stress to the bony structure such as intracranial hypertension and obesity increase risk.[1] Patients receiving treatment for a pituitary adenoma are at a greater risk for SESS as well as postpartum woman due to pituitary gland regression (Sheehan syndrome) or lymphocytic hypophysitis.[4] ESS has also been associated with lactation and menopause.[1] Females are nearly five times more likely to have ESS than males and the peak incidence of PESS is around 30-40 years.[1] Therefore, middle-aged obese women with hypertension that are multiparous are likely at a greater risk for PESS.

ESS is characterized radiographically by a flattening of the pituitary gland along the sellar floor often in a semi-lunate morphology, with an elongated and midline pituitary stalk and herniation of subarachnoid space into the often thickened sella turcica.[1] Two factors that define PESS pathology are (1) increased intracranial CSF pressure and (2) defects of the sellar diaphragm.[4]

While patients with PESS often have an unremarkable past medical history, the most common symptom of ESS is a nonspecific headache. However, it should be noted that a direct correlation has not yet been found between ESS and headache presentation, so this may very well be an incidental finding.[4] Another presentation of ESS is visual field defect. While most cases of visual field defect are seen with SESS, possible visual field disturbances are associated with PESS in up to 16% of cases.[5] A patient with ESS, most commonly SESS, may also present with associated abnormalities such as rhinorrhea, irregular menstruation, and infertility.[1] [6]

Diagnosis of ESS is most often with radiographic visualization of the findings through CT or MRI imaging of the brain and orbit with and without contrast [8](Figure 1). A normal midline pituitary stalk distinguishes the lesion from an arachnoid cyst.[9] With incidental findings in an asymptomatic patient (PESS), secondary causes need to be considered (SESS). Hormone testing may be considered for both symptomatic and asymptomatic patients due to the prevalence of hypopituitarism.[3] These include measuring cortisol, free thyroxine, estradiol or testosterone, insulin like growth factor 1 (IGF-1), and prolactin levels.[3] 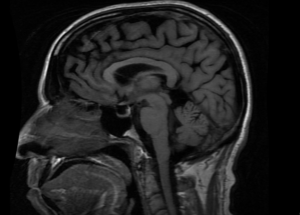 An endocrinological, neurological and ophthalmological evaluation may be considered for patients that present with ESS.[5] Surgery may be indicated in some cases of ESS where visual worsening occurs, including chiasmopexy.[2]