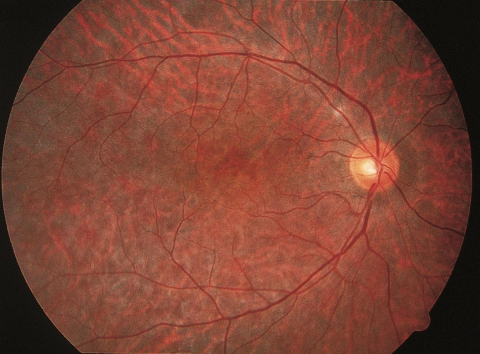 The syndrome was first described in 1958 when Kearns and Sayre presented two patients with a triad of chronic progressive external ophthalmoplegia, pigmentary retinopathy and cardiac conduction defects leading to heart block.[2] The syndrome belongs to a diverse group of mitochondrial myopathies characterized by the presence of “ragged red fibers” seen in Trichrome stained skeletal muscle biopsies.[3] The mitochondrial dysfunction seen in Kearns-Sayre syndrome results in a wide spectrum of systemic manifestations including ocular, cardiac, endocrine and neurological abnormalities. The ocular sequelae, in particular bilateral ptosis and ophthalmoplegia, are often the first signs of the disease.

There is no apparent sex predilection and there are no known risk factors.

Over 200 cases of Kearns-Sayre syndrome have been published, but the true incidence of the disease remains unknown.

Skeletal muscle biopsy stained with Massons or Gomori trichrome exhibits “ragged red fibers” resulting from increased numbers of enlarged sub-sarcolemmal mitochondria (Figure 1).[4] Electron microscopy reveals increased numbers of abnormal mitochondria. The mitochondria are often enlarged, with disorganized cristae and paracrystalline inclusions. Retinal evaluation reveals disruption and atrophy of retinal photoreceptors as well as aberrant pigment distribution in all layers of the retina.[5][6] Spongiform degeneration of the brain has been reported in multiple patients at autopsy.[7]

Kearns-Sayre syndrome results from alterations in mitochondrial or nuclear DNA that disrupt oxidative phosphorylation, impairing ATP production in affected mitochondria. The manifestations vary depending on the degree of mitochondrial dysfunction and type of tissue affected. The dysfunction can occur by a number of mechanisms.

In addition to mitochondrial defects, nuclear DNA defects cause disease by disrupting regions coding for electron transport chain subunits or enzymes essential to oxidative phosphorylation. The nuclear DNA abnormalities disrupt polymerases involved in the replication of mtDNA and proteins involved in the transport and metabolism of substrates necessary for mtDNA synthesis.[10]

Due to the potential for both mitochondrial and nuclear DNA defects, the inheritance pattern can be maternal, autosomal recessive or autosomal dominant.[11][12]

Patients with Kearns-Sayre syndrome typically present within the first two decades of life with signs of and symptoms due to bilateral, progressive ptosis and external ophthalmoplegia. Most cases are sporadic with a negative family history, although inherited forms have been described. Serial examination of old photos can be invaluable in establishing the chronic, progressive nature of the disease. Although the ophthalmoplegia may be less severe than the ptosis at presentation, it usually becomes progressively worse over a period of years. The systemic manifestations typically follow a similar pattern of chronic progressive worsening, in particular the cardiac conduction defects ultimate result in complete heart block, which has been described up to 8 years after diagnosis.[13] Despite retinopathy, visual acuity is often preserved, although severe macular involvement and poor vision have been described.[14]

A thorough evaluation of extraocular movements including ductions, versions and levator function is essential in identifying the extent of the ophthalmoplegia and the etiology of the ptosis. Slit-lamp examination of the anterior segment is typically normal. Dilated fundus examination is important to identify pigmentary retinopathy and rarely, optic neuritis.[15] Due to the systemic nature of the disease, physical examination focusing on neurological, cardiac, auditory and endocrine systems may help establish the diagnosis.

Bilateral, symmetrical ptosis and ophthalmoplegia are critical early signs. In more advanced ophthalmoplegia, patients may turn the entire head or body to view objects outside of primary gaze. Due to the slow, symmetrical onset of ophthalmoplegia, most patients do not experience diplopia until late in their course or not at all. The pigmentary retinopathy can range from mild to severe, is more prominent in the later stages of the disease and often presents with a diffuse stippled “salt and pepper” appearance involving the macula and midperiphery, as well as peripapillary retinal epithelial atrophy.[2][3][5][16][17] Cardiac auscultation can identify rate or rhythm abnormalities due to heart block and rarely, murmurs related to mitral valve regurgitation.[13] Hearing loss, cerebellar ataxia and cognitive impairment are also potential diagnostic signs.[2][17] Skeletal muscle weakness can result in masked facies and may progress to include wasting of the neck and shoulder muscles and even mild limb weakness.[2][11][17][18] Up to 38% of patients may exhibit short stature.[19] Endocrine dysfunction can result in gonadal dysfunction, hyperglycemia, hypocalcemia and hyperphosphatemia. [19][20][21][22][23][24]

Patients often present with complaints of drooping eyelids. Diplopia can result from asymmetric progression of the chronic external ophthalmoplegia. Visual symptoms related to acuity may occur in conjunction with progression of pigmentary retinopathy, but most patients have relatively good vision at the time of diagnosis. Despite findings of muscle weakness documented in some Kearns-Sayre patients, they may be unaware of or deny noticeable weakness.[18]

The criteria for diagnosis are onset of CPEO and pigmentary retinopathy prior to age 20, plus any one of the following: complete heart block, CSF protein > 1mg/ml, cerebellar ataxia, short stature, hearing loss, dementia and endocrine abnormalities.[3]

Biopsy of skeletal muscle can be helpful in establishing the diagnosis. Although the presence of ragged red fibers on biopsy is not part of the current diagnostic criteria, it both supports the diagnosis and provides a tissue sample for genetic testing. Due to mitochondrial heteroplasmy and the potential uneven distribution of the genetic defect among different tissue types, biopsy is usually taken from an affected skeletal muscle.

Electroretinography and dark adaptometry are usually normal or only mildly abnormal.[11][25]

All patients with suspected Kearns-Sayre syndrome should be referred to a primary physician or cardiologist to have an electrocardiogram to screen for heart block. A subset of patients with Kearns-Sayre syndrome may have mitral valve regurgitation and an echocardiogram may be warranted based on clinical examination and consultation with a cardiologist.[13]

Endocrine dysfunction is common and should be evaluated in conjunction with an endocrine specialist. Hypoparathyroidism, diabetes mellitus, Addison’s disease and growth hormone deficiency have all been reported.[19][20][21][22][23][24]

CSF protein greater than 1mg/ml is a potential diagnostic criterion. Elevated CSF pyruvate and lactate have also been reported.[26]

Auditory testing can be useful for characterizing hearing loss associated with Kearns-Sayre syndrome.

Fluorescein angiography demonstrates retinal pigment mottling with areas of hyper and hypofluorescence as a result of interspersed retinal pigment clumping and atrophy primarily within the posterior pole. Increased choroidal fluorescence can be seen in areas of RPE atrophy.[16][27] MRI of the brain may reveal progressive lesions involving the brainstem, globus pallidus, thalamus and white matter of the cerebrum and cerebellum.[28]

There is no definitive treatment for Kearns-Sayre syndrome although symptomatic and preventative treatments can improve quality of life. Ptosis can be surgically corrected with a frontalis sling, although the efficacy of the procedure may wane in the later stages of the disease if the facial muscles become involved. Often ptosis recurs or progresses, requiring additional upper eyelid surgery. Patients with diplopia may benefit from prisms or strabismus surgery.

Cardiac dysfunction due to progressive arrhythmia can lead to stroke or death and evaluation by a cardiologist at the time of diagnosis and at regular intervals thereafter is suggested. Conduction abnormalities have been successfully managed with pacemaker implantation.[7] In cases of severe cardiac dysfunction, heart transplant is an option.[30]

The visual prognosis for Kearns-Sayre syndrome is relatively good. Only 40-50% of patients develop mild visual acuity disturbance or night blindness and central vision is usually preserved throughout life.[3][14][16] Mortality depends largely on the severity of cardiac disease, although endocrine dysfunction has also been a cause of significant morbidity and mortality in Kearns-Sayre patients.

Kearns-Sayre syndrome is a mitochondrial disease that presents with progressive ptosis and extraocular muscle restriction in a young adult. Care should be taken to evaluate these patients for systemic disease including cardiac conduction deficits.