Difference between revisions of "Orbital Neurofibroma"

Orbital neurofibromas are peripheral nerve sheath neoplasms derived from Schwann cells, perineural cells and fibroblasts.1 They can manifest within the orbit, and they may or may not be associated with systemic neurofibromatosis.

Neurofibromas may broadly be classified as plexiform, diffuse, or localized tumors.

Plexiform Neurofibromas: Plexiform neurofibromas are the most common subtype encountered in the orbit and are closely associated with Neurofibromatosis type 1 (NF1). Some authors consider these tumors to be pathognomonic for NF1, though case reports of orbital plexiform neurofibomas in the absence of other findings suggest that these lesions may instead be highly suggestive of the diagnosis.4,5 They typically present early in life and appear clinically as infiltrative, multinodular masses growing along the course of peripheral nerves. Like diffuse neurofibromas, they are typically poorly circumscribed and vascular.1 Classic characteristics include a “bag-of-worms” consistency and eyelid involvement producing an S-shaped deformity. Approximately 20% of tumors associated with NF1 may undergo malignant transformation.2

Localized Neurofibromas: Localized (or isolated) neurofibromas are focal, well-circumscribed neoplasms that typically present in the superior orbit during the third to fifth decade of life with a slowly progressive mass effect.4 They most frequently involve branches of the frontal nerve.3 11-28% of patients with localized neurofibromas have a family history or systemic signs of NF1.1 In the absence of NF1, they only rarely undergo malignant degeneration.8 These tumors are less vascular than plexiform and diffuse neurofibromas, and they can often be differentiated from plexiform and diffuse lesions by imaging studies. The occurrence of multiple localized neurofibromas has been reported and may represent a “form fruste” NF1.4

Neurofibroma versus Schwannoma: Neurofibromas can be distinguished from schwannomas, other peripheral nerve sheath tumors, in several ways. In contrast to schwannomas, neurofibromas are soft, unencapsulated and involve a number of other cell types in addition to Schwann cells.4,9 Schwannomas do not invade the neural tissue and their growth compresses the adjacent nerve, whereas neurofibromas invade and enlarge the nerves from which they are derived. Neurofibromas can also be distinguished on histopathological examination by multiple different characteristics, including the presence of nerve fibers within the tumor.10

Neurofibromas are peripheral nerve sheath neoplasms derived from a combination of Schwann cells, axons, perineural cells and fibroblasts interspersed with collagen and a myxoid matrix 9, sometimes in association with NF1. The NF1 gene is a tumor suppressor whose gene product, neurofibromin, is a down regulator of the proto-oncogene p21-ras.11

According to the NIH diagnostic criteria, the diagnosis of NF1 is made with the presence of two of the following:
- six or more café au lait macules >5 mm in diameter in prepubertal individuals, and >15mm in diameter in postpubertal individuals
- two or more neurofibromas of any type, or one plexiform neurofibroma
- freckling in the axillary or inguinal regions
- optic nerve glioma
- two or more Lisch nodules (iris hamartomas)
- a distinctive bony lesion such as sphenoid dysplasia or thinning of the long bone cortex with or without pseudoarthrosis
- a first degree relative (parent, sibling, or offspring) with NF1 by the above criteria

Several other systemic associations exist with NF1, including an increased frequency of CNS tumors, cognitive deficits, seizures, cerebrovascular dysplasia, and hypertension. Life expectancy appears to be modestly shortened in patients with NF1, though data are limited.11

Genetic testing is available for NF1 mutations, but results do not necessarily indicate the severity or potential manifestations of the disease for an individual patient.11

Localized Neurofibromas:  Histopathologic evaluation of localized neurofibromas demonstrates a pseudocapsule surrounding loosely arranged bundles of perineural cells, fibroblasts, and Schwann cells, which may be in complexes with axons.1,14  Nuclei may be fusiform, elongated, or comma-shaped.9,14 Variable amounts of collagen deposition and myxoid stroma are also present, and immunohistochemical studies show a positive reaction to S-100.1,14 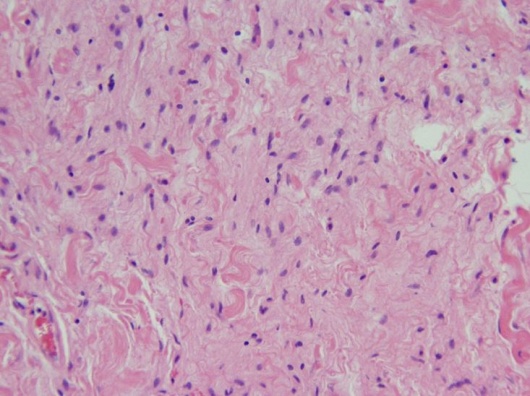 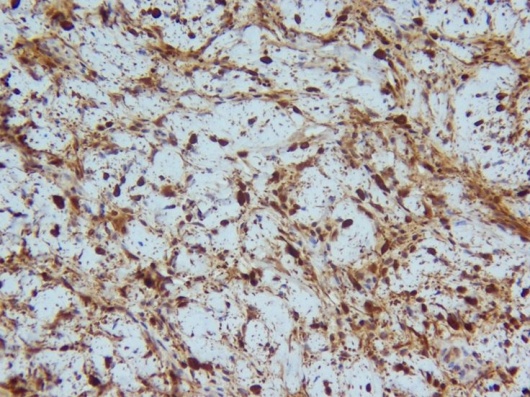 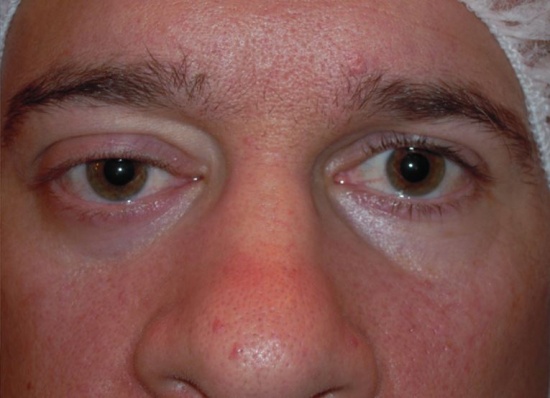 34 year old male with ptosis, hypoglobus, and proptosis of the right eye secondary to a localized neurofibroma of the right, superior orbit.

Other manifestations of NF1 may be present, including Lisch nodules and optic pathway gliomas which may be found on ophthalmic examination:
- Lisch nodules are iris hamartomas that increase in frequency with age, being uncommon in young children but present in over 90% of adults with NF1.11
- Optic pathway gliomas (OPGs) are low grade neoplasms (most often pilocytic astrocytomas) that may occur sporadically, but typically affect children under the age of 6 with NF1.12 Regular ophthalmologic screening is recommended for patients with NF1, and 20% will develop an optic pathway glioma.13 They can affect the optic nerve, chiasm, tract, or radiation. They were previously thought to be benign but are now known to demonstrate variable growth that is difficult to predict. OPGs often present with decreased acuity. They can be diagnosed on MRI which classically demonstrates fusiform enlargement of the optic nerve with a downward kink in the orbit. Management is controversial, though often involves periodic MRI evaluation with consideration of treatment for progression, severe visual impairment or poor prognostic factors. Given the risks of surgery and radiation, initial treatment most commonly consists of a chemotherapeutic regimen such as carboplatin and vincristine.12
- Glaucoma and choroidal hamartomas may also be seen in patients with NF1.13

Imaging of localized neurofibromas shows smoothly marginated ovoid lesions1,14 which may or may not be lobulated. On CT, they appear isodense or hypodense to extraocular muscles and show variable contrast enhancement with some reports of ring-enhancing characteristics.1,10 MRI demonstrates low-moderate T1 signal intensity and moderate-high T2 signal intensity. There may be heterogeneity of signal strength within the lesion, reflecting the mixed histopathology and vascularity of the tumors.1,14 As with CT, contrast enhancement is variable on MRI. 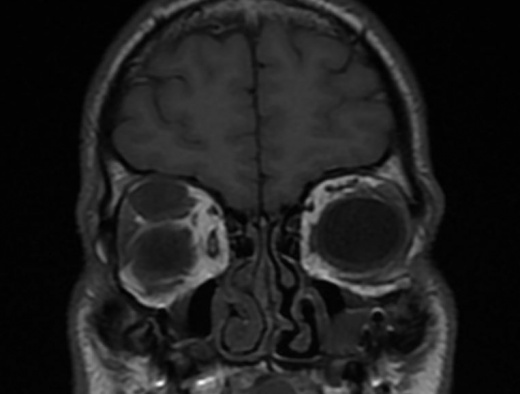 Imaging of plexiform neurofibromas demonstrates multi-lobulated, non-encapsulated tumors that lack clear margination1,15 and cause diffuse thickening of the involved nerve. As with localized neurofibromas, they tend to show low attenuation on CT, isointensity on T1, and hyperintensity on T2 weighted images15 with variable contrast enhancement.

Treatment decisions for localized neurofibromas depend on the severity of clinical signs and symptoms. If indicated, surgical removal is facilitated by the relatively low vascularity, pseudocapsule, and circumscribed nature of the lesion. Excision is achieved through an anterior or lateral orbitotomy, depending on the location and size of the lesion, and is typically curative.1,4

Plexiform neurofibromas are more difficult to remove because of their relative vascularity and lack of clear margination. Removal may be complicated by subtotal resection, and recurrence or re-growth is common.3 Large lesions may ultimately require exenteration.2

Neurofibromas in the setting of NF1 develop malignant transformation in 20% of cases2 and require routine monitoring.

In the absence of NF1, localized neurofibromas rarely undergo malignant transformation, but recurrence has been occasionally reported following surgical removal.1 Patients should be advised to have routine follow up with their EyeMD ophthalmologist.