Difference between revisions of "Transposition Surgeries in Strabismus" 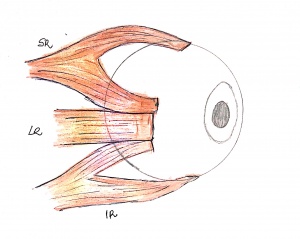 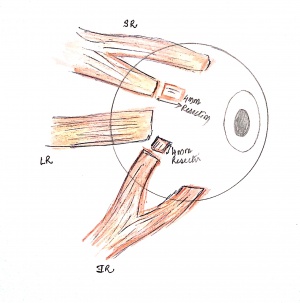 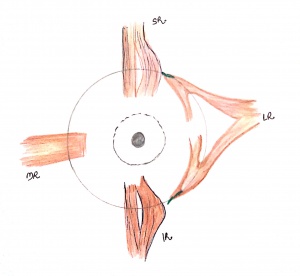 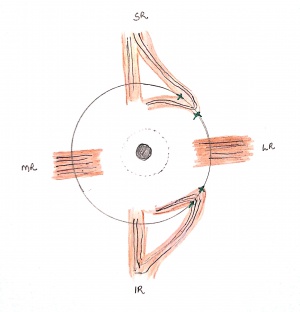 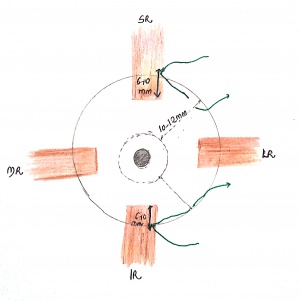 Technique The procedure was initially described by Peter in 1934.(12) A limbal based peritomy is performed in the superonasal quadrant which is sufficient to provide exposure to both medial and superior recti. The superior oblique is isolated and dissected free of surrounding fascial attachments along the tendon, following underneath and along the nasal side of the superior rectus. The superior oblique tendon is engaged on a small muscle hook on the nasal side of the superior rectus muscle and is secured with a double-armed 6-0 absorbable suture The tendon is disinserted and brought down toward the superior edge of the medial rectus insertion. The tendon is then sutured to the sclera at the superior border of the medial rectus insertion at the point on the tendon thus bringing the eye to a centred position. (Figure7)

Technique Limbal based peritomy is performed, lateral rectus is hooked and intermuscular septa is dissected 15mm posterior to the insertion. Muscle is then split 15mm posterior to the insertion, towards the posterior septum. The split portions of the lateral rectus are than secured with the help of 6-0 polyester suture, and disinserted. The upper half of the muscle is then passed beneath the superior oblique, and inferior half is moved beneath the inferior rectus and inferior oblique. The two halves of lateral rectus are then inserted near the insertion of medial rectus. (Figure9) Effectiveness of the procedure Gokyigit et al, inserted the lateral rectus 1mm posterior to medial rectus found a success rate of 90 per cent with the procedure with the mean pre-op deviation being 73.7Δ ± 8.9Δ and post-op deviation being 11.8Δ ± 1.0Δ.(16)

Knapp’s procedure is indicated in patients of monocular elevation deficit, the horizontal recti (both medial and lateral recti are disinserted and transposed superiorly.(19)(Figure10)

In modified Knapp’s procedure, both the horizontal recti are split into two halves. The lower half is used for correction of horizontal deviation and the superior half is transposed superiorly.(20)(Figure11)