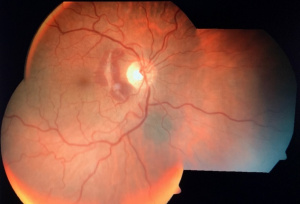 A choroidal rupture is a break in the choroid, Bruch membrane, and the retinal pigment epithelium (RPE).

A choroidal rupture occurs as a result of traumatic mechanical event directly at the site of contusion or more commonly away from the impact. The force buckles the globe in at the area of impact and causes stress folding of the globe wall at a peripheral site causing the choroid, RPE and Bruch membrane complex to stretch and break.

A choroidal rupture usually is a result of a traumatic injury; it is noted three times more frequently with closed globe injuries than open globe. It is noted with both blunt and penetrating globe injuries.

Any type of ocular trauma is a risk factor for the development of a choroidal rupture. Sports injuries due to martial arts, basketball, soccer, tennis, basketball, golf, hockey puck, paint balls have all been reported in the literature. Car accidents with air bag injuries have led to choroidal ruptures. Although not associated with systemic disease, eyes of patients with pseudoxanthoma elasticum, Ehlers-Danlos and angioid streaks have brittle Bruch membrane and are prone to rupture with minimal trauma.

Histopathologically, a choroidal rupture demonstrates a disruption in the choriocapillaris, the RPE, and Bruch membrane. The overlying neurosensory retina is intact.

During a closed globe injury, the eyeball is first mechanically compressed and then rapidly hyperextended. The sclera's tensile strength resists this compression. The retina is elastic and stretches during such an injury. However, Bruch membrane breaks because it does not have sufficient tensile strength or elasticity. The choriocapillaris is injured and bleeds into the subRPE and/or subretinal space. Such hemorrhage may hide the choroidal rupture initially. Over days, the blood clears and a whitish/yellowish, curvilinear, crescent-shaped subretinal streak is visible, usually concentric to the optic disc. Over time, choroidal neovascularization (CNV) can develop. In most, the CNV involutes over time. In about 30%, the CNV may recur, with a serous or hemorrhagic pigment epithelial detachment, anytime following formation of the choroidal rupture. If the rupture or CNV does not involve the foveal center, vision may not be affected.

The diagnosis of a choroidal rupture is made based on the history of a closed globe injury in an eye with a crescent shaped yellowish/whitish subretinal streak that is usually concentric with the optic disc.

A history of recent or remote blunt trauma resulting in a closed globe injury to the eye is a necessary component to the history in order to make the diagnosis of a choroidal rupture.

A complete ocular examination is needed and would include a dilated examination of the fundus to detect the choroidal rupture(s).

The clinical diagnosis of a choroidal rupture can be made during ophthalmoscopic examination of the fundus.

-Fluorescein angiographic findings typically shows hypofluorescence in early frames due to a break in choriocapillaris and choroidal vessels at the rupture site with staining at late frames due to dye leakage from adjacent choriocapillaris, If CNV is present, hyperfluoresence that progressively increases in size and intensity will be seen with time. -Autofluorescence of the rupture site will show hypofluorescence of the wound site where RPE is missing with hyperfluoresence at the edge of choroidal rupture. -OCT shows loss of continuity of RPE at the site of rupture with thinning of underlying inner choroid.

No laboratory evaluation is necessary since eyes with choroidal rupture have a history of recent or remote blunt trauma to that eye.

Lacquer cracks in an eye with high myopia are in the differential diagnosis of choroidal rupture. Lacquer cracks are often bilateral and the eyes have other signs of high myopia including a scleral crescent adjacent to the tilted disc and a posterior staphyloma. Angioid streaks are often in the differential diagnosis and are bilateral subretinal streaks that emanate from the optic disc and may be associated with CNV.

Observation is recommended. An Amsler grid may be given to the patient and any changes in the grid should be reported to the patient's eye care provider since a change may indicate the development of CNV.

Observation is recommended with Amsler grid monitoring. However, in the presence of CNV, anti-vascular endothelial growth factor injections can be used.

There is no medical therapy available to cause resolution of a choroidal rupture.

Followup is indicated one to two times per year or as dictated by symptoms.

There is no surgical procedure available that would result in resolution of a choroidal rupture. Isolated case reports of successful management of recent onset thick subretinal hemorrhage at fovea with intravitreal gas (SF6 or C3F8), tissue plasminogen activator (rtPA) exist in literature

Subretinal and subRPE hemorrhage can result at the time the choroidal rupture develops.

Choroidal neovascularization, usually type 2, can develop from the choroidal rupture where choroidal neovessels proliferate and grow in the subretinal space, leading to hemorrhage and fibrosis and decreased vision if untreated. Most CNV undergo spontaneous resolution but many will need anti-VEGF injection.

A choroidal rupture by itself does not change over time. Visual acuity at presentation depends on the location of the rupture and presence of retinal edema and hemorrhage in the macula. The vision may improve as the subretinal edema and hemorrhage improves. However, there is a risk of CNV formation due to the rupture in Bruch membrane and growth of CNV in the subfoveal area could lead to decreased central vision in an eye where the fovea was spared by the choroidal rupture. Subfoveal ruptures and associated traumatic optic neuropathy denote a poor visual prognosis.