Examination of the optic nerve includes a combination of methods ranging from direct assessment by the ophthalmologist to the information provided by ancillary testing equipment.

Direct Ophthalmoscopy. Examination of the optic nerve can be performed with a handheld direct ophthalmoscope. Direct ophthalmoscopy provides an upright, magnified (approximately 15x), monocular view of the optic nerve. The structure of the exam is similar to the one described below with the 7 Steps. Depending on the specific needs to the patient exam, certain features of the ophthalmoscope should be adjusted. For example, the size of the pupil influences the optimal aperture selected. Ideally, the aperture should approximate the size of the pupil as this will allow sufficient light to enter the eye to provide enough illumination of the fundus. The selection of an aperture larger than the pupil introduces more light than able to enter the pupil and creates secondary problems such as glare from reflecting light, and pupil constriction. Additionally, the use of the red-free light improves contrast and can help to identify hemorrhages such as ones affecting the optic nerve head (e.g. Drance, splinter) and retinal nerve fiber layer defects.

Slit-lamp Exam. Slit-lamp examination of the optic nerve uses hand-held lenses to magnify and affords better control over the view during examination. This method provides a stereoscopic, inverted view of the optic nerve. Detailed information regarding this exam is given in the 7 Steps below.

Optic Disc Stereophotography. Monitoring progression of optic nerve changes can best be performed with optic disc stereophotography. Comparing previous with current optic nerve images allows the examiner to evaluate for both gross and fine changes, such as notching of the rim or baring of the vessels as a sign of progressive neuroretinal rim loss. Additionally, it allows for the documentation of transient signs of glaucomatous progression such as optic disc hemorrhage which may aide future clinical evaluations.

OCT. The OCT (Optical Coherence Tomography) can be used to evaluate the optic nerve, RNFL, and GCC (ganglion cell complex) based on low coherence interferometry.

HRT. The HRT (Heidelberg Retina Tomograph) is a confocal scanning laser that uses multiple cross section images to create and analyze three dimensional structures such as the optic nerve.

Slit-lamp measurements of the vertical and horizontal cup-to-disc ratios should be determined. Asymmetry of 0.2 or more between the two optic nerves raises suspicion for possible glaucoma [1] Care must be taken to note whether the cup was identified by change in color or contour (see Step 2). Visibility of lamina cribrosa fenestrations within the cup is known as the laminar dot sign [Figure 1]. 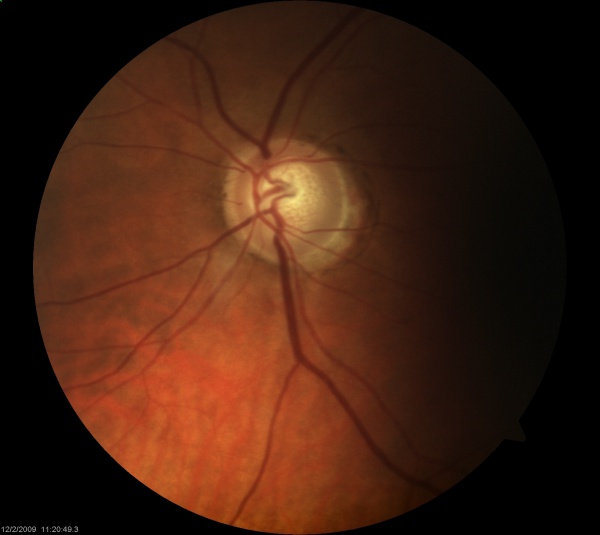 Descriptions of the color of the cup and the neuroretinal rim are important when examining the optic nerve. Close attention should be given to areas where kinks in vessels and pallor overlap, as the former would more accurately identify the edge of the cup. Of note, this discrepancy between the cup and area of pallor becomes more apparent when saucerization is present, Saucerization occurs when shallow cupping undermines the rim while pallor is confined to the center of the cup. Classically, pallor associated with glaucoma occurs in conjunction with thinning of the neuroretinal rim. As such, pallor in excess of cupping may be suggestive of a non-glaucomatous, neurological cause of optic nerve damage.

The contour of the neuroretinal rim may reveal subtle features consistent with glaucomatous change such as focal notching or thinning. This is likely to occur after resolution of splinter hemorrhages [Figure 2]. Focal notching will lead to localized loss of the retinal nerve fiber layer (RNFL), which can be demonstrated using the red-free filter on the slit-lamp or be directly measured with ancillary testing such as the GDx. This loss in the RNFL may precede changes in the optic nerve if discovered early in the disease process. Progression of focal notching leads to a sharpened, thinned rim where sections of the rim appear lost. In contrast to these localized areas, concentric atrophy results in a generalized loss of rim tissue. 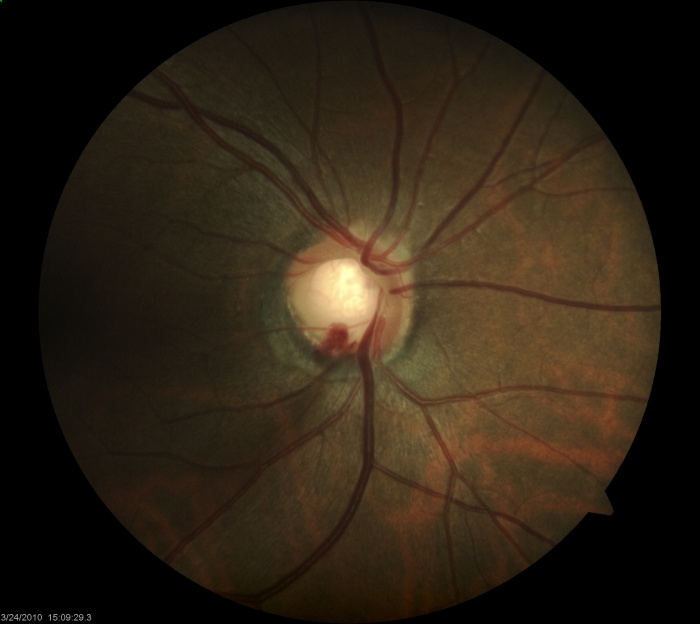 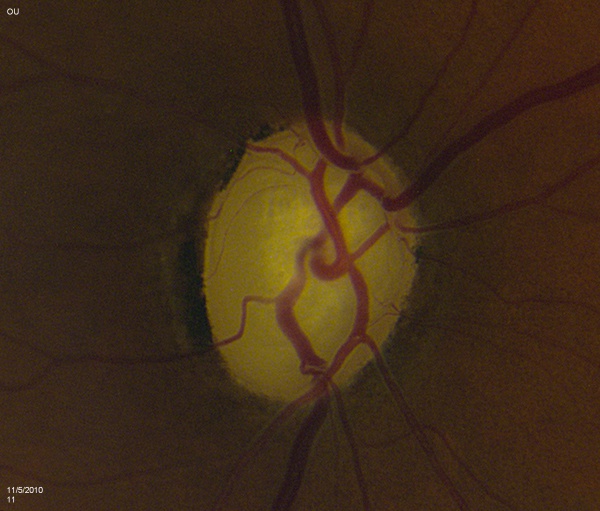 The four quadrants of the neuroretinal rim follow a characteristic pattern of thickness in normal individuals as described by the ISNT rule. The ISNT rule represents the thickness of these quadrants in decreasing order: inferior (I), superior (S), nasal (N), and temporal (T). Any violation of the ISNT rule raises suspicion of glaucomatous changes. This is especially important if thinning is noted inferiorly and superiorly as these areas are usually the first affected by glaucoma. 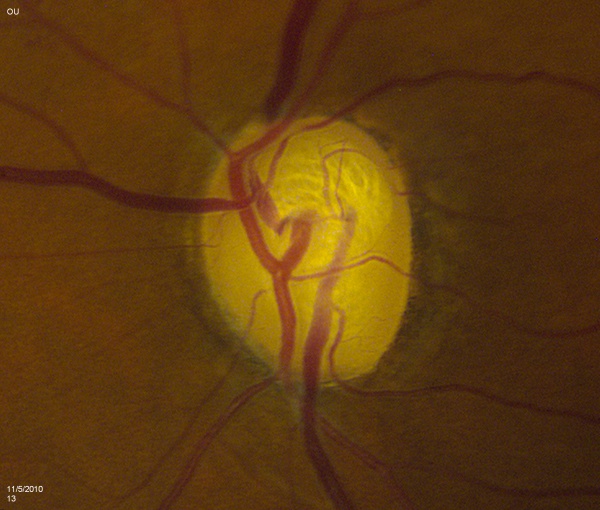 Figure 4: Violation of the ISNT rule. Near absence of the inferior neuroretinal rim

The dimensions of the disc should be measured along its long axis making sure to account for the magnification factor of the lens being used — x1.00, x1.08, and x1.32 for the Volk Super 66, 78, and 90 diopter lenses, respectively. Other methods for determining disc size includes using the 5 degree aperture on the direct ophthalmoscope that closely approximates the size of a normal disc. Also, confocal scanning laser ophthalmoscopes can provide detailed measurements during examination. Care should be taken not to include the zones around the disc in the measurement such as the scleral lip or the zones of alpha and beta atrophy (see Step 7).

Vessel tortuosity denotes some level of chronic central vessel occlusion, particularly when combined with the presence of collateral vasculature. Sharply bending bayoneting vessels can be located at sharpened rims. Baring of circumlinear vessels that once resided at the rim margin can be seen moving away from the border. Presence of splinter hemorrhages can signal glaucomatous changes and usually leave behind focal rim notching approximately 15 to 18 months later. These hemorrhages are easily overlooked if the examiner does not make a point to look for them. They rarely occur in non-glaucomatous eyes and should be noted if discovered as they last for a brief period of time (usually between 2 to 4 months). They mostly commonly exist in the superotemporal or inferotemporal rim adjacent to disc vessels. In particular, patient with normal tension glaucoma are at increased risk (3 to 5 times more likely) to have them. The differential for disc hemorrhages includes posterior vitreous detachment, trauma, hypertension, or use of anticoagulation medications like coumadin. 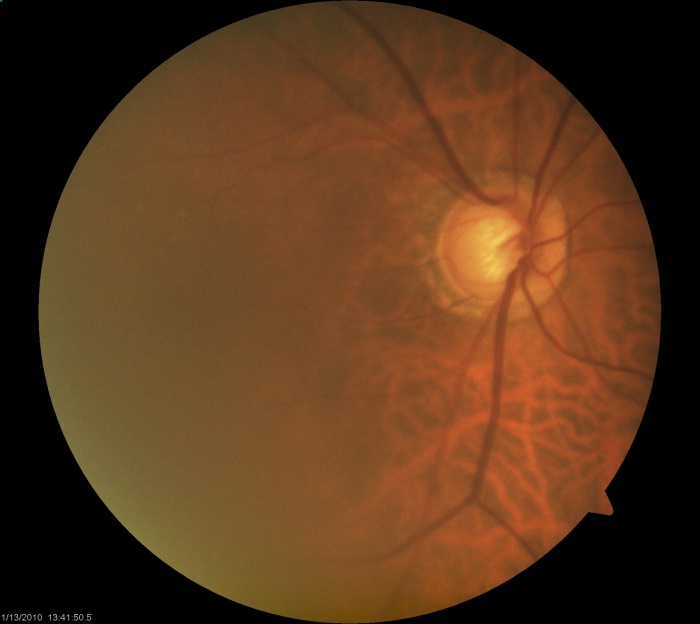 Figure 5: Nasalization of the disc vessels 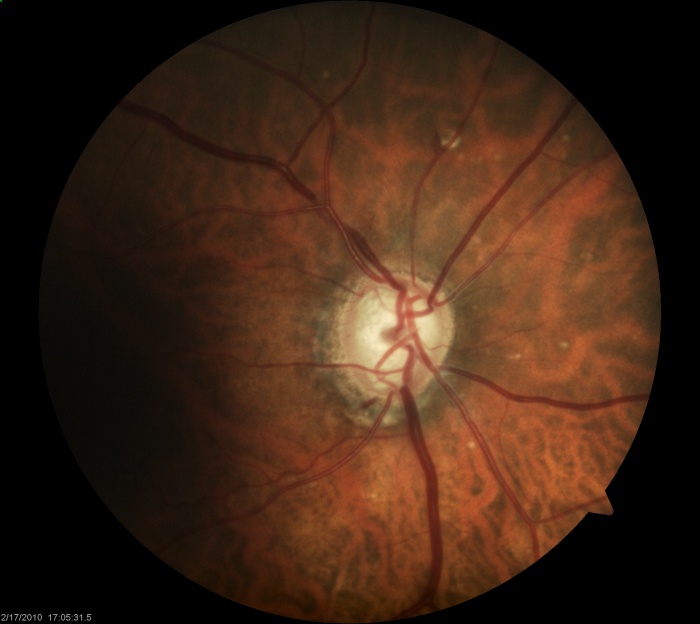 Figure 6: Example of bayonetting vessels of the optic nerve

Evaluation of the peripapillary architecture and related atrophy aids in glaucoma assessment. Two distinct zones of atrophy—zone alpha and beta—can surround the optic disc. Histologically, the beta zone represents an area of absent RPE and in some areas absent photoreceptors with the presence of an intact Bruch’s membrane[2][3]. Zone beta atrophy can be seen in glaucomatous nerves[4]. Studies have shown mixed results in terms of the correlation between the presence of the beta zone and the presence of glaucoma[5]. For example, the Beijing Eye Study found the presence of the beta zone in nearly 73% of their normal participants over the age of 50 [6].   When present, its size may correlate with the severity of perimetric defects and degree of neuroretinal rim loss[7]. These areas of atrophy are most likely located temporally but can encircle the optic nerve. Zone alpha atrophy is more common in normal eyes and is located beyond zone beta away from the nerve. It contains areas of hyper or hypopigmentation and areas of irregular RPE. The histological difference between these two types of atrophy translates to differing visual field defects as zone beta atrophy produced an absolute scotoma given the absence of RPE and photoreceptors, and zone alpha atrophy more commonly produced a relative scotoma[8]. Of note, care must be taken when examining patients that are myopic or have tilted optic nerves. In these individuals, scleral crescents (Figure 7), in particular inferiorly, can be present and must not be confused with zone alpha or beta atrophy. 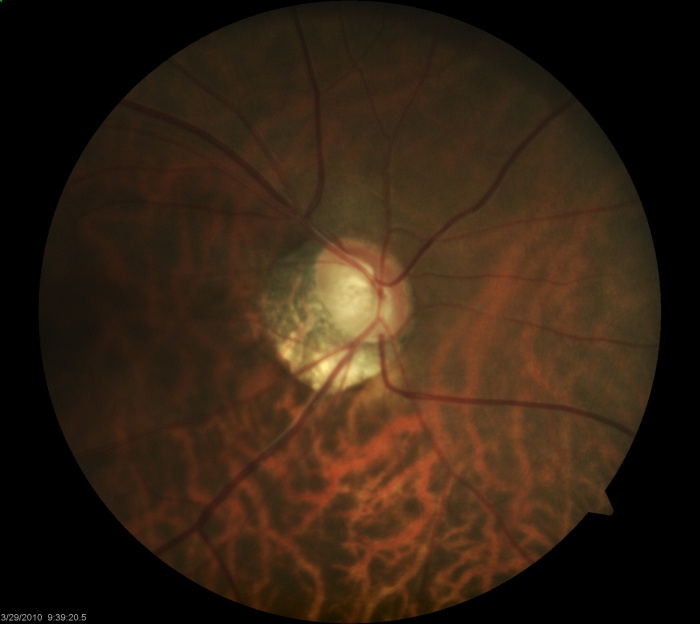 Examination of the optic nerve demonstrates both inter-observer and intra-observer variability.

Inter-observer Variability. Inter-observer variability occurs when two or more observes vary in their evaluation of a common entity. When evaluating the optic nerve (and the progression of glaucoma), different clinicians may provide different measurements in their clinical examination. This may lead to differences in clinical decision making and practice patterns.

To improve inter- and intra-observer reproducibility, a quantitative system for evaluating the optic disc called the DDLS has been proposed. This scale strives to reduce subjectivity by taking into account the following:

·  In cases where the rim is absent, the circumferential extent of rim absence is given in degrees. Sloping, common in myopes, is not the same as absence of the rim.

Repetition and adherence to these (or similar steps) can aid any ophthalmologist in achieving an accurate and consistent evaluation of the optic disc. This is particularly important for longitudinal monitoring in glaucoma cases that are less than clear cut.

3. Susanna R, Vessani R. New findings in the evaluation of the optic disc in glaucoma diagnosis. Current Opinion in Ophthalmology. 2007;18:122-128.