HSV infection can cause inflammation in nearly every ocular tissue. In cases of corneal involvement, the epithelium, stroma, or endothelium may be affected. Both herpes stromal keratitis (HSK) and HSV endotheliitis can present clinically with stromal opacity and, therefore, may be difficult to distinguish. In HSK, stromal opacity is due to immunopathology within the stroma, is often associated with corneal neovascularization, and recurrent episodes can lead to irreversible stromal scarring and vision loss.

In HSV endotheliitis, either secondary inflammation caused by the virus and/or direct infection of endothelial cells is thought to cause endothelial dysfunction and subsequent stromal edema and opacity. Stromal scarring from true endotheliitis is rare. While presentation may appear similar between HSK and HSV endotheliitis, they represent two distinct pathologic mechanisms that are both induced by HSV infection.

The majority of ocular HSV infections are caused by HSV type 1 (HSV-1), except in cases of neonatal ocular infections, which are largely caused by HSV-2 contracted during decent through an infected birth canal.[1] The herpes viruses are unique in their ability to cause productive infections as well as establish latency, a relatively quiescent state in which the viral genome is retained in the absence of productive virus particle production. Therefore, the virus is never completely eradicated from the host and may reactivate causing recurrent disease. In response to certain stressors, including exposure to ultraviolet light,[2] psychological stress [3], and hormonal fluctuation, [4] HSV may reactivate from latency to produce infectious virions with recurrent disease at the initial sight of infection. HSV infection of the mucosal and epithelial surfaces of the orofacial region, including the cornea, precedes retrograde axonal transport of the virus within the respective division of the trigeminal nerve to the trigeminal ganglia, where additional viral replication occurs and latency is established within neuronal nuclei. In times of stress, the virus may reactivate, travel back down the ophthalmic division of the trigeminal nerve and cause recurrent disease in the cornea. It has also been suggested that the cornea itself may be a reservoir for viral latency, although this theory has yet to be definitively proven.[5]

HSV-1 infects the majority of the world’s adult population with recent seroprevalence studies from the United States and Germany detecting 57.7% and ~75% HSV-1 positivity, respectively.[6] [7] The annual incidence of ocular HSV infections has recently been estimated at 11.8 per 100000 people in the United States[8] and 13.2 per 100000 in France, where the incidence of recurrence was 18.3 per 100000 people. [9] In the Herpetic Eye Disease Study, 18% of patients diagnosed with HSV-1 ocular disease experienced a recurrence involving the stroma,[10] and stromal keratitis represented 44% of all recurrences.[11] Furthermore, previous bouts of HSK significantly increased the risk of future recurrences of stromal disease. Therefore, HSK represents a significant burden of ocular disease caused by HSV-1 infection.

While both HSK and HSV endotheliitis can present with stromal opacity, they are separate pathological processes. The stromal opacity in HSK is driven by inflammation within the stroma that is often accompanied by neovascularization (Figure 1). The opacity in HSV endotheliitis is the result of stromal edema due to HSV-mediated endothelial dysfunction in the absence of stromal inflammation or neovascularization (Figure 2). 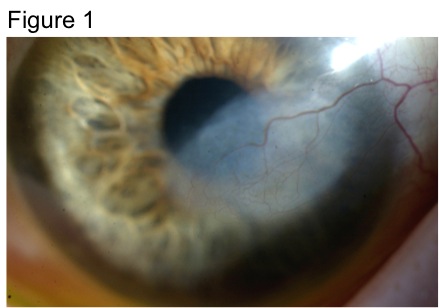 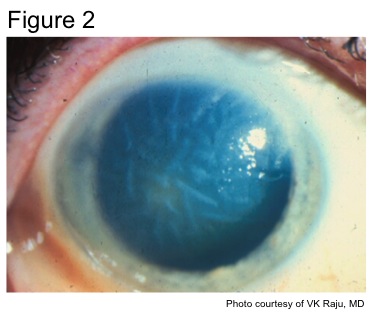 In HSV endotheliitis, stromal edema is often accompanied by underlying keratic precipitates (KP) and an anterior chamber inflammatory reaction. HSV endotheliitis is categorized into three main forms, namely disciform, which is the most common, diffuse, and linear, based on the pattern of endothelial dysfunction and stromal edema. Intraocular pressure may be elevated secondary to trabeculitis. [14]

The pathophysiology of HSK is complex and remains incompletely understood. Current data suggests that CD4 T cells of the adaptive immune system are required for the development and maintenance of HSK. [15]

Based on extensive studies in animal models, several theories exist as to the stimulus for the immunopathological CD4 T cell response:

HSV DNA, protein, or live virus is inconsistently found in cases of HSK, in comparison to HSV epithelial keratitis where HSV is often identified. Other leukocytes, such as neutrophils, also infiltrate the stroma during HSK, and stromal neovascularization is a key component of the inflammatory cascade that leads to stromal opacity.[19] [20]

Deturgesence of the corneal stroma is accomplished in part by the pump mechanism of the endothelium. Endothelial cell dysfunction can lead to inadequate stromal dehydration with subsequent edema and opacity. In HSV endotheliitis, endothelial cells are dysfunctional due to either direct infection with HSV or as a consequence of the anterior chamber inflammation induced by HSV infection. Inflammation with the stoma can be a component of HSV endotheliitis.

The diagnosis of HSK and HSV endotheliitis is predominantly clinical, based on a history of recurrent herpetic ocular disease and slit lamp examination of the eye revealing characteristic herpetic lesions as described above. Additionally, PCR analysis, enzyme-linked assays, and viral culture of the tear film may reveal HSV-1 DNA, protein, or live virus, respectively.[21] However, sensitivity of these tests is greatly reduced in the absence of active corneal ulceration, such as in non-necrotizing HSK and HSV endotheliitis.[22]While virus has been isolated from the anterior chamber of patients with HSV endotheliitis, it is rarely detected in the tear film.[23]

The differential diagnosis for HSK includes other etiologies of infectious interstitial keratitis, such as other viruses (Varicella zoster virus, Epstein-Barr virus), bacteria (syphilis, lyme), fungus, and Acanthamoeba, as well as immune-mediated etiologies, including sarcoidosis and Cogan syndrome.

The differential diagnosis for HSV endotheliitis includes endothelial dysfunction caused by other herpes viruses (Varicella zoster virus, cytomegalovirus) as well as the inflammatory glaucomatous conditions Fuchs’ heterochromic iridocyclitis and Posner-Schlossman syndrome, which have been postulated to have viral etiologies, including herpes viruses.24-26[24] [25] [26]

As discussed above, the immune response to corneal HSV-1 infection is a major contributor to the stromal damage and subsequent scarring responsible for the blinding complications of HSK. Thus, the standard of care for treatment of HSK involves topical steroids, which broadly inhibit the damaging immune response, often in combination with oral antiviral medication to block potential viral replication [27]

In cases of chronic or recurrent HSK in which stromal scarring has caused severe visual impairment, corneal transplantation in the form of either full-thickness penetrating keratoplasty or anterior lamellar keratoplasty may be attempted to restore corneal clarity. It is well established that full-thickness grafts placed in patients with a history of HSK have a higher rate and incidence of rejection compared to grafts placed for non-inflammatory conditions.[28]

The exact mechanisms responsible for accelerated graft rejection in patients with a history of herpetic eye disease remains incompletely understood but viral reactivation induced by the grafting procedure with severing of trigeminal nerve termini is thought to contribute to the rejection process. Thus, it is common practice to place patients undergoing corneal transplantation for HSV corneal infection on long-term systemic antiviral therapy to inhibit potential viral replication.

More recently, deep anterior lamellar keratoplasty (DALK) has been used as an alternative surgical approach in patients with visually significant stromal scars from HSK in which the endothelium remains healthy. DALK offers the option of replacing only the corneal stroma with preservation of the host endothelium, which is often the focus of transplant rejection. Initial results using DALK appear promising with several small studies demonstrating high rates of graft survival.[29] [30] [31]

The potentially blinding complications of HSK stem from the recurrent nature of the disease. Repeated bouts of stromal inflammation may eventually lead to irreversible scarring and loss of sight. Recurrences are likely driven by viral reactivation in the trigeminal ganglion with transport of the virus to the cornea, leading to a local immune response within the stroma. A potentially useful mechanism of therapy, therefore, involves inhibiting viral reactivation to prevent recurrent corneal inflammation. A landmark trial that was part of the Herpetic Eye Disease Study demonstrated that systemic antiviral therapy with oral acyclovir significantly reduced the frequency of recurrent ocular HSV-1 disease.[32] In patients with a history of stromal disease specifically, oral acyclovir treatment reduced the probability of HSK recurrence by 50%, from 28% to 14%. These data suggest that blocking viral replication systemically, likely within the trigeminal ganglia where reactivation begins, inhibits the impetus for recurrent stromal inflammation. Moreover, acyclovir’s mechanism of action, phosphorylation by viral thymidine kinase with subsequent incorporation into viral DNA by viral DNA polymerase resulting in strand termination, requires active viral DNA replication, suggesting that HSV-1 must be at least in the process of reactivating for acyclovir to function.

Current research has investigated therapeutic HSV vaccination strategies with the goal of inhibiting viral reactivation within the trigeminal ganglia and preventing reactivation events. CD8 T cells of the adaptive immune response function to inhibit viral reactivation within the trigeminal ganglion using non-lytic mechanisms.[33] Therefore, a therapeutic vaccine designed to boost the CD8 T cell response within latently infected ganglia may achieve inhibition of viral reactivation and subsequent corneal inflammation without the need for daily oral medication. Consistent with this hypothesis, a small controlled trial in humans demonstrated a significant reduction in HSV-1 ocular recurrences following subcutaneous administration of heat-inactivated HSV-1.[34] Although there was a trend toward decreased HSK recurrences in the vaccinated group, the study was not powered to achieve statistical significance for this subgroup of HSV ocular disease. Larger clinical trials are required to validate this finding.