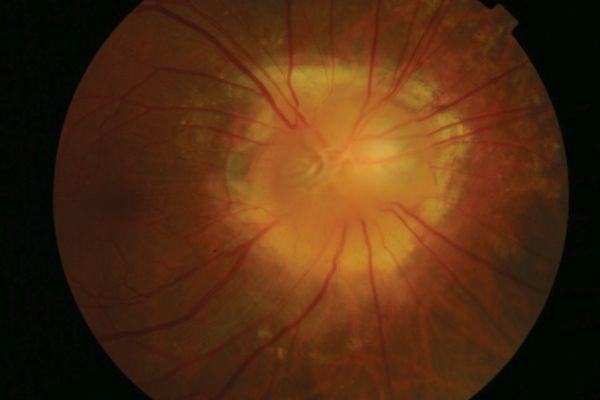 Sixty-five-year-old man, diagnosed with morning glory disc anomaly, in the right eye. Visual acuity was 20/40 in the right eye and 20/20 in the left eye. Magnetic resonance image of the brain was normal. © 2019 American Academy of Ophthalmology [1]
OMIM
120430

Morning glory anomaly is a rare congenital malformation of the optic nerve.[2] It is named for its resemblance to the morning glory flower.[3] When it is associated with systemic signs and symptoms, it is known as morning glory syndrome.

The embryonic origins of morning glory anomaly is not clear but is hypothesized to be either due to a defect in fetal fissure closure or a primary mesenchymal abnormality.[2]

Morning glory anomaly is more common in females and more rare in African-Americans.[4]

The morning glory disc anomaly can be seen with transsphenoidal basal encephalocele. In the basal encephalocele, a congenitally malformed outpouching of the meninges, often containing the optic chiasm and hypothalamus, protrudes through a defect in the sphenoid bone.[4] Children with this structural defect often have dysmorphic features, including a wide head, flat nose, hypertelorism and a midline notch in the upper lip.[4] Many patients with transsphenoidal encephalocele also have callosal agenesis, leading to dilation of the lateral ventricles.[5]

Visual acuity can vary from normal 20/20 to very poor(20/200 to count fingers) depending on the extent of optic nerve anomaly. Patients often have visual field defects, commonly enlarged blind spots.[3][4] However, amblyopia may be a contributing factor to the poor vision in unilateral cases. Patients are also often initially referred for leukocoria or strabismus.[3] 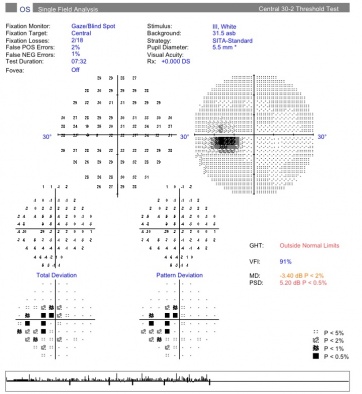 The optic nerve appears large and funneled.[4] There is a conical excavation of the dysplastic optic disc and the surrounding posterior pole, filled with glial tissue.[3] An increased number of straight retinal vessels arise from the disc margin and peripapillary pigmentation can also been seen.[3] The term “macular capture” is used when the macula is involved in the excavation.[4] Contractions of the optic nerve have also been described and is attributed to the presence of myofibroblasts in the papillae.[3] Due to unilateral involvement in most cases, an afferent pupillary defect can be noted.[3] 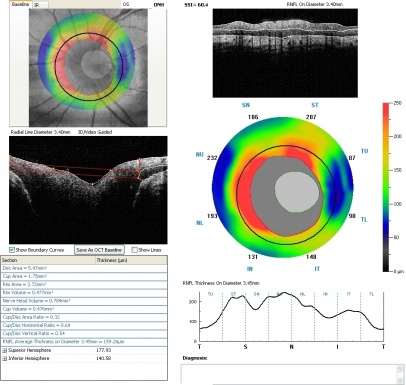 There is no treatment for morning glory disc anomaly. However it is important to optimize visual acuity to prevent amblyopia.[3] Dilated fundus exams should be done to detect serous retinal detachments that tend to originate in the peripapillary area and extends to the posterior pole.[4] Brain imaging (MRI, MRA and/or CTA) should be done to rule out CNS involvement, including basal encephalocele, Moyamoya and other structural or vascular abnormalities.[3] Surgical correction of the transsphenoidal basal encephalocele can be extremely difficult or even contraindicated due to the vital structures that may be found in the herniation, including the optic chiasm, the hypothalamus, and the anterior cerebral artery.[4]