Small incision lenticule extraction (SMILE) is a relatively new refractive procedure designed to treat a multitude of refractive errors such as myopia, hyperopia, presbyopia, and astigmatism. The procedure involves using a femtosecond laser to create a corneal lenticule which is extracted whole through a small incision without the use of an excimer laser. It is reported to achieve effects similar to laser-assisted in situ keratomileusis (LASIK) with excellent post-operative outcomes.

Starting in 2007, an intrastromal lenticule method was reintroduced as an alternative to LASIK called Femtosecond Lenticule Extraction (FLEx) intended for patients with extreme myopia. After improvements to scan modes and energy parameters, improved visual recovery times were noted, with refractive results similar to LASIK. Following the implementation of FLEx, a procedure called small incision lenticule extraction (SMILE) was developed, involving a small 2-3 mm incision used to allow for extraction of the whole corneal lenticule without the need to create a flap.[1]

While still in its early stages of proclivity amongst surgeons, SMILE is noted for achieving similar effects as LASIK but with some possible benefits such as faster recovery of post-op dry eye, reinnervation of corneal nerves, and a potential biomechanical advantage. The commencement of this procedure began in September 2011 and is established in various locations such as Europe, China and India. Approval from the FDA in the United States was received in 2016 for spherical myopic corrections; approval for compound myopic astigmatism followed in October 2018.[2]

SMILE is considered more cost effective to LASIK as well because it requires one laser platform as compared to two in LASIK. 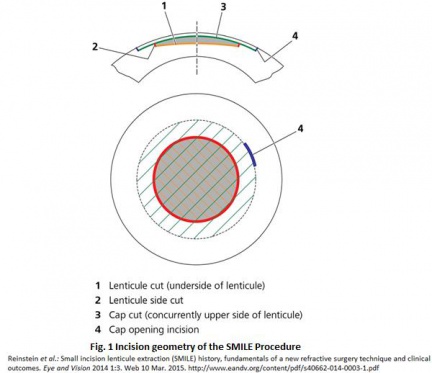 During the SMILE procedure, the patient is raised to the contact glass of the femtosecond laser and suction ports are activated to keep the patient's eye fixated in the correct position while the lenticule is created. The lower interface of the intrastromal lenticule is created first (using an out-to-in direction with the laser to maximize the time without blurring the patient’s central vision), followed by the upper interface of the lenticule (using an in-to-out direction), known as the cap, and finally a 2–3 mm tunnel incision (usually supero-temporal) that links the cap interface to the corneal surface. To avoid any undesirable effects in the cornea such as haziness, the two interfaces (lower and upper) are created from the endothelial side of the cornea to the epithelial side. The patient is then moved to the surgical microscope for the lenticule separation and extraction part of the procedure. The layers of the lenticule are outlined and the lenticule is removed from the cornea using a pair of retinal micro-forceps, or can be extracted directly from within the pocket with the latest versions of the lenticule stripper, one of many instruments being developed for the SMILE procedure specifically.[3]

When planning the treatment, the following parameters can be selected by the surgeon: cap thickness, cap diameter, cap sidecut angle, refractive correction, lenticule diameter (optical zone), lenticule sidecut angle, and the minimum lenticule thickness (so that the lower lenticule interface can be easily differentiated from the upper interface).

Complications arising during the SMILE procedure have been reported very infrequently, supporting the reported safety and predictability of the procedure. Studies using SMILE found epithelial abrasions, small tears at the incision, and perforated caps in few cases, however, none of these patients had late visual symptoms.[7] The loss of suction during the femtosecond laser portion of the procedure is one of the primary complications with SMILE, and seems to be a difficult topic to define care that applies to most or all cases. While noted to be very infrequent, one study showed the majority of cases in which suction loss occurred were able to be reapplied in the same setting(81.8%). [8] 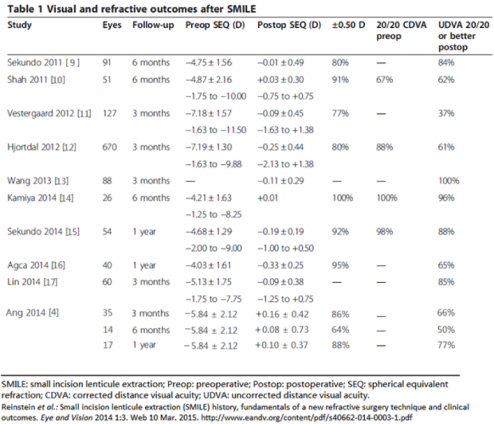 The rest of the suction loss cases were aborted, though, it should be noted that for all cases involving suction-loss, there remained a significant number of patients that attained UDVA within attempted correction. Because a small incision (2-3 mm) is used in place of an entire flap, corneal nerve severance is minimal in comparison to LASIK. This coincides with the decreased occurrence of post-operative dry eye and studies have indeed shown an increase in nerve reinnervation after treatment. In a study by Xu et al. comparing dry eye parameters between SMILE and LASIK, all paramaters were found to be worse in the early postoperative period for both groups, however the SMILE group showed better scores in tear break up time, the McMonnies score, and Schirmer’s test.[18] These findings by Xu et al. coincide with similar results from a study by Denoyer et al. [19]which found high rates of dry eye symptoms for both procedures reported one month after surgery, but at 6 months after surgery, 80% of SMILE patients finished using any eye drops in contrast to only 57% of the patients in the LASIK group who did the same.

The SMILE procedure, while still in its early stages, seems to be a promising alternative to LASIK in some cases. Given its flapless technique and results that appear to be similar to LASIK, it may offer the same correctional abilities with the potential benefits of faster recovery of post-op dry eye, quicker reinnervation of corneal nerves, and biomechanical advantages. After further clinical trials are completed for SMILE, FDA approval for indications may expand. This procedure may be an upcoming option for more patients undergoing refractive surgery, due to its minimally invasive technique and promising outcomes.