Carbonic anhydrases are a family of zinc-containing metalloenzymes that are found in multiple human tissues and catalyze a reversible reaction of carbon dioxide and water into carbonic acid and bicarbonate ions. These enzymes play an important role in the acid-base homeostasis, pH regulation, and fluid balance of the tissue.[1]

Acetazolamide [(N-(5-Sulfamoyl-1,3,4-thiadiazol-2-yl)- acetamide] is a nonbacteriostatic sulfonamide derivative and potent carbonic anhydrase inhibitor which has been widely used for the management of glaucoma, idiopathic intracranial hypertension (IIH), cerebrospinal fluid leak, high altitude sickness, and epilepsy.[2] In the recent study by Ku et al, low dose acetazolamide has shown promising results also in preventing methotrexate-induced toxicities in patients undergoing treatment on high doses such as in central nervous system lymphoma and acute lymphoblastic leukemia.[3] Moreover, improvement in obstructive and central sleep apnea has been also seen in patients on short-term acetazolamide.[4] Due to the natriuretic effect in the proximal tubule and the alkalization of urine, acetazolamide can lead to rhabdomyolysis-induced myoglobinuric renal failure[5], especially when used in patients with ATP shortage and Na+/K+-ATPase dysfunction such as in patients with McArdle disease.[6]

In this article, we discuss the adverse events and complications of acetazolamide in the field of Ophthalmology.

Systemic adverse events have been well documented and reported in the literature. According to the Idiopathic Intracranial Hypertension Treatment Trial patients on acetazolamide were at significantly higher risk of experiencing paresthesia, dysgeusia, gastrointestinal symptoms (nausea, diarrhea, vomiting), and loss of appetite compared to patients belonging to the placebo arm of the trial.[7] Other less common findings were metabolic acidosis, hypokalemia, fatigue, polyuria, and calcium phosphate type renal stone formation.[7] In addition, in the that study it was shown that the median number of adverse events reported by each patient was five (5) with at least one (1) event reported in 84% of participants.[7] 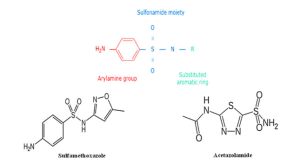 Moreover, there are studies that have suggested that patients with a sulfa allergy should avoid acetazolamide in the light of some severe and life-threatening reactions that could potentially occur as a result of cross-reactivity. In the retrospective study of Lee et al where 34 patients with IIH and self-reported sulfa allergy on acetazolamide (n=13), furosemide (n=7), or both (n=14) were included, it was noted that there is a low likelihood of cross-reactivity between sulfonamide antibiotics and nonantimicrobial sulfonamide medications and this is because of two key structural differences between them which render them less likely to cause allergic reactions.[9] The first key difference is that acetazolamide lacks the arylamine (NH2) side chain at the N4 position which is present in sulfonamide antibiotics and is thought to play a central role in the development of hypersensitivity.[8] The second difference is that it also lacks an aromatic heterocyclic ring and nitrogen group/s at the N1 position.[9](Figure 1) Based on the above findings, the authors concluded that patients with IIH could receive acetazolamide as the risk of experiencing an adverse reaction is low.[9] Furthermore, Strom et al have shown that while there is an association between hypersensitivity reaction after sulfonamide antibiotics and subsequent reaction to nonantimicrobial sulfonamides, this is likely due to susceptibility to allergic reactions rather than to cross reactivity.[10]

Acetazolamide-induced hemopoietic adverse events have been reported in the literature and include pancytopenia, pure thrombocytopenia, aplastic anemia, and agranulocytosis in both adults and pediatric patients.[11] [12] [13] [14] [15] Overall, their incidence is very low and possibly result from immunologic reactions or toxic mechanisms.[15] According to the findings of the Idiopathic Intracranial Hypertension Treatment Trial, monitoring of blood cell count is not considered necessary.[7]

As already mentioned, in rare cases acetazolamide can also induce electrolyte abnormalities such as hypokalemia, metabolic acidosis, and hyponatremia, and thus, its use in patients with decreased renal function is contraindicated as well as in patients with hyperchloremic acidosis.[16] [17] However, in severe cases of hypochloremia or metabolic alkalosis acetazolamide has been successfully used for the correction of underlying electrolyte abnormalities.[16][18] There are currently no studies that support electrolyte evaluation prior to treatment initiation.7

The first case of acetazolamide-induced myopia was reported in 1956 by Marcel Back in a 39-year-old man who was on acetazolamide (250mg/day).[19] Discontinuation of acetazolamide led to symptom resolution whereas a new episode occurred once he started taking the medication again at the same dose. At that point the mechanism of action was considered to be attributed to the changes in salt and water balance while sensitivity factors were thought to contribute to this reaction which results in edema of the ciliary body, lens curvature, and anterior chamber narrowing.[19][20] Since then, a number of studies have described this phenomenon with the most recent one reporting significant acetazolamide-induced myopia in a 44-year-old otherwise healthy woman who received a single dose of 125mg for high altitude sickness prophylaxis.[21] Of note, in this case, bilateral choroidal effusions were also demonstrated (discussed below).

The incidence of acetazolamide-induced myopia is not known. The change in myopia usually ranges between 1 to 8 diopters and studies have shown that visual alterations can be experienced as soon as 4 hours after administration or as late as 5 days.[22] Improvement of symptoms is typically noticed within 24 hours after discontinuation but complete resolution can take several days to occur.[23] Dexamethasone is considered an effective alternative to acetazolamide for the prevention of high altitude sickness.[21] [23]

A number of drugs have been linked to the development of acute angle-closure glaucoma (ACG) in nonglaucomatous patients including acetazolamide, topiramate, anticoagulants, furosemide, and glipizide suggesting an idiosyncratic dose-independent reaction of the uveal part which leads to the development of edema and shallowing of the anterior chamber.[24][25] In these cases discontinuation of medication is required while some authors have recommended administration of systemic and topical steroids, cycloplegics, and aqueous suppressant medications on a case-by-case basis.[24] However, there are no clinical studies supporting their use.

Choroidal effusions in the setting of acetazolamide administration have been well reported in the literature in patients who either undergo ophthalmic procedures or as received prophylactically for high altitude sickness.[21][26] In the majority of cases the patients present with concomitant myopic changes or ACG while in 2017, the first report of choroidal effusions without other ocular manifestations was published by Hari-Kovacs et al.[27]

Acetazolamide has been the pharmacological treatment of choice in patients with IIH due to the safety profile in dosages up to 4 grams per day and for effectively reducing the production of cerebrospinal fluid which can be as much as 50% within 60 to 90 minutes after administration.[28] [29] Moreover, studies have demonstrated that patients on acetazolamide have overall good clinical outcomes with the improvement of papilledema, visual field testing, and a decrease in intracranial pressure.[30] [31] Nevertheless, due to its action on the proximal renal tubules and the alkalization of urine acetazolamide has been considered a risk factor for calcium phosphate stone formation in contrast to loop diuretics such as furosemide which lead to hypercalciuria and thus calcium oxalate stone formation.[32] In 2015, Au et al investigated the effect of daily acetazolamide in patients with IIH and concluded that stone formation is an uncommon side effect and it can most likely take place within the first eighteen (18) months of therapy whereas there are no clinical features that can be associated with its occurrence.[33]

Acetazolamide has been used for the management of both systemic and ophthalmic conditions. Although uncommon, a number of adverse events and side effects have been associated with its use some of which are mild and reversible, and only on rare occasions, its use could lead to irreversible and severe conditions such as anaphylaxis and Stevens-Johnson syndrome.

Since some of the reactions are unanticipated, awareness of these potential complications, early recognition, management, and prevention is crucial for the safety of the patients on acetazolamide.