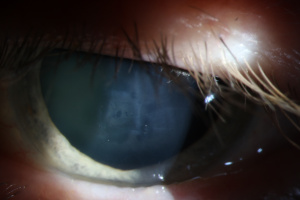 Originally developed as a prophylactic treatment for influenza A, amantadine is now used for treatment of tremors associated with Parkinson’s disease (PD), extrapyramidal side effects of other antipsychotic medications, and fatigue in patients with multiple sclerosis. There are known side effects of amantadine, such as neuroleptic malignant syndrome, light-headedness and drowsiness, orthostatic hypotension, dry mouth, constipation, Stevens-Johnson syndrome, and skin rashes. A rare side effect of amantadine toxicity is bilateral corneal edema. 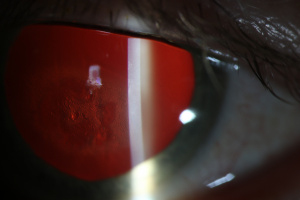 Ocular toxicity from amantadine use is extremely rare, with a diagnosis of cornea edema or Fuchs dystrophy in 0.27% of patients during a two-year surveillance study performed at the Veteran’s Health Administration [1]. A separate 2016 study looked at data from the Taiwan Longitudinal Insurance Database and found the relative risk (RR) of corneal edema in patients with Parkinson’s disease on amantadine to be 1.98 [2].

Other dopaminergic agonists have been shown to cause similar corneal edema, which reversed after the agent was stopped. These include methylphenidate [3], ropinirole [3], and bupropion [4].

Known risk factors of amantadine toxicity include higher daily dose and cumulative dose. In addition, patients on multiple dopaminergic agonists may be at increased risk of developing corneal edema due to an additive effect. 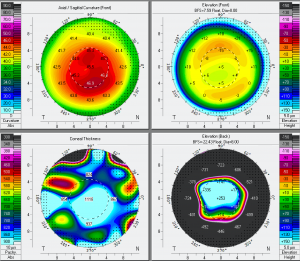 Pentacam imaging of the above patient, demonstrating central corneal thickness of 1118 microns.

Three commonly used metrics to evaluate corneal endothelial health include endothelial cell density (ECD), percentage of endothelial hexagonal cells (EH), and coefficient of variation (CoV). A 2010 cross-sectional study found that Parkinson’s patients taking amantadine had lower ECD, EH, and higher CoV than age-matched controls [5]. Furthermore, there was a trend toward lower ECD and EH, and increased CoV, among patients with a higher cumulative lifetime dose of amantadine. Another study demonstrated that when stratifying patients taking amantadine into subgroups based on their daily dose, patients taking >100 mg/day had a RR of 2.71, while patients on a daily dose of <100 mg/day had a RR of 1.69 [2] of developing corneal edema [2].

A 2019 prospective study evaluated the corneal endothelium health among 90 patients with Parkinson’s Disease on amantadine, 30 patients with Parkinson’s disease who have never taken amantadine, and 30 healthy controls over the course of one year and found that patients taking amantadine had a larger decrease in ECD, EH, and a larger increase in CoV than amantadine naïve Parkinson’s disease patients or healthy controls. When stratified by daily dose of amantadine (200 mg, 300 mg, or 400 mg), higher doses were associated with a larger decrease in EH and a larger increase in CoV; however, differences in ECD did not meet the threshold for statistical significance, but followed the same trend [6].

While the exact mechanism remains unclear, several studies have demonstrated that amantadine has dose-dependent deleterious effects upon the corneal endothelium, even in the absence of clinically evident changes.

Two case reports detail patients in whom keratoplasty was required after developing amantadine-induced corneal edema [7] [8]. In both cases, histopathologic showed moderate to complete loss of the corneal endothelium without guttata or inflammation. One possible explanation is that there may be medication-induced stress on the cornea endothelium, which at a threshold level can lead to endothelial cell dysfunction/loss and subsequently clinically significant cornea edema.

Diagnosis of amantadine-induced corneal edema is clinical. Incidence of edema is highest in the first weeks and months after starting the medication, but has been reported several years after initiating therapy [1][9]. Key exam findings include a lack of anterior chamber inflammation, deep stromal vessels, and endothelial guttata; presence of one or more of these clinical signs would suggest a different etiology (see below).

Corneal sensation is typically intact and presence of intact cornea sensation helps to distinguish this medication-induced toxicity from a viral etiology (HSV, VZV). Endothelial cell count may be useful to confirm a decrease in endothelial cell density. 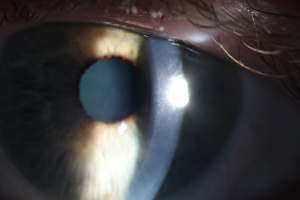 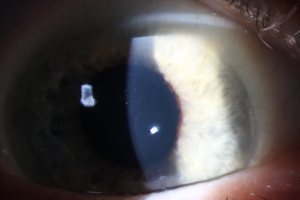 Most patients have a good visual outcome with reversal of corneal edema if amantadine use is promptly stopped.