Angioid streaks are bilateral, narrow, irregular lines deep to the retina configured in a radiating fashion emanating from the optic disc, which result from breaks in a weakened Bruch's membrane.  Ophthalmologists should be aware that there are numerous systemic diseases associated with angioid streaks, the most common being pseudoxanthoma elasticum.   The diagnosis of angioid streaks is one that can usually be made clinically.   Most patients are asymptomatic but secondary complications can result in choroidal neovascularization, lead to vision loss, and warrant treatment.

Angioid streaks were first reported in 1889 by Doyne and the term "angioid streaks" was first used by Knapp in 1892. Angioid streaks appear as bilateral, narrow, jagged lines, deep to the retina. They typically are configured as irregular radiations from a ring-like area of peripapillary pigment mottling. They are broader at the point of origin at the optic nerve and taper to a point as they branch out from the disk margin. The number of angioid streaks in an affected eye can vary from one to many. Associated optic disc drusen are common. Angioid streaks are orange, red, grey, or brown in color and can be confused for retinal blood vessels on superficial examination.

Angioid streaks result from crack-like breaks in Bruch's membrane, which is abnormal in its structural composition, predisposing to these localized areas of rupture. This process may occur spontaneously or could be secondary to blunt trauma, even very minor. In an individual with angioid streaks, scleral depression should generally be withheld as this could theoretically contribute to the formation of additional breaks in Bruch's membrane.

The incidence of angioid streaks is highly associated with its systemic association. Chatziralli et al reported angioid streaks in ~3% of patients with sickle cell, 12% with Paget disease, and almost all with pseudoxanthoma elasticum. (1)

Histopathologic studies have shown extensive calcification and thickening of Bruch's membrane and the intervening interstitial space between capillaries.  Histopathologic break's in Bruch's membrane correspond to the clinical location of angioid streaks.  Ingrowth of fibrovascular tissue may occur from the choroid into the sub-retinal pigment epithelial space, which is abnormally thin in the region of an angioid streak, causing subretinal hemorrhage, choroidal neovascularization, and disciform scarring.  Regardless of any underlying systemic association, the pathology of angioid streaks is similar.  The exact pathogenesis and pathophysiology of angioid streaks is not known.

The diagnosis is usually made or suspected by clinical examination alone and can be confirmed with fluorescein angiography, which is important to rule out associated choroidal neovascularization. A multitude of methods, which include retinography, auto-fluorescence, optical coherence tomography, and indocyanine green angiography can be helpful in the diagnosis and continued patient evaluation of angioid streaks. 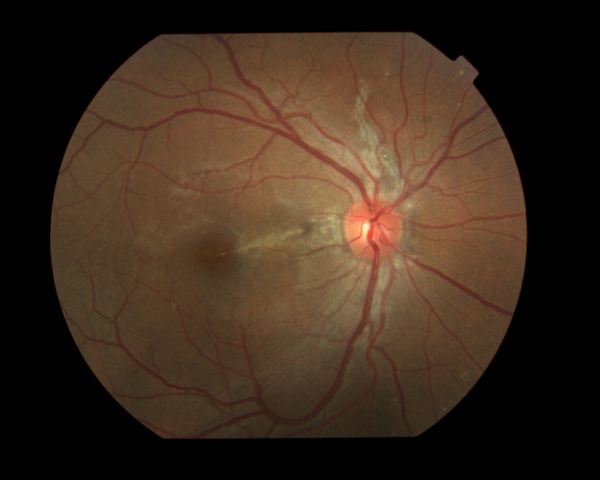 The fundus appearance is characterized by a peripapillary ring of atrophy from which numerous narrow, irregular streaks radiate in a circumferential pattern within the posterior pole but can extend anteriorly to the mid-periphery (See Figure 1).  The findings are generally bilateral and fairly symmetric.  The color of angioid streaks depends on individual fundus pigmentation and is derived from the contributions of the underlying retinal pigment epithelium and choroid.

Angioid streaks can cause subretinal hemorrhages from choroidal fibrovascular ingrowth. These hemorrhages can resolve spontaneously or can lead to choroidal neovascularization, which can be recurrent and lead to progressive visual loss. . In fact, recent literature has revealed that in patients with pseudoxanthoma elasticum, the longer the angioid streak, the higher is the risk of choroidal neovascularization and macular atrophy. (5)

Angioid streaks are generally asymptomatic but can cause visual impairment when involvement of the macula causes secondary complications such as choroidal neovascularization or subretinal hemorrhage.

Fluorescein Angiography (FA) is a critical tool as part of the evaluation in any patient with angioid streaks and visual symptoms to rule out an associated choroidal neovascularization, which would warrant therapy.  FA also may be helpful to clarify the diagnosis when the clinical findings are not definitive.  Angioid streaks appear hyperfluorescent on FA due to overlying retinal pigment epithelial atrophy with mottled edges from retinal pigment epithelial clumping (see Figure 2).  A secondary choroidal neovascular membrane can occur and shows a characteristic increase in size and intensity of fluorescence with angiogram progression (see Figure 2). 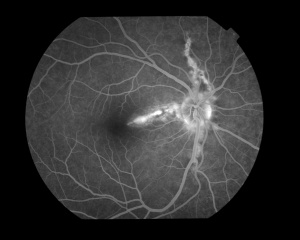 Fundus autofluorescence can help visualize angioid streaks that may not be visible by clinical examination.

A general management strategy includes determining if any underlying systemic association is present and if any secondary ocular complication exists that warrants treatment.

A patient may be sent to the ophthalmologist with a known systemic disease association but at other times may be newly diagnosed with angioid streaks and have no known underlying systemic cause.  The medical workup should be tailored to the individual after a thorough review of systems is undertaken.  The three most common systemic associations are pseudoxanthoma elasticum, Paget's disease of bone, and sickle cell hemoglobinopathies, and therefore any screening workup should focus on these entities.  Patients should receive a complete physical examination by an internist, a skin biopsy, and blood testing to include serum alkaline phosphatase, serum calcium and phosphate, and hemoglobin electrophoresis.

Angioid streaks are usually asymptomatic requiring observation only.   When existent treatment methods can simply restrict the pathology; however, it cannot be perpetually eliminated. When associated choroidal neovascularization is present, laser photocoagulation and photodynamic therapy have been used in the past with relatively poor results and frequent recurrences. Intravitreal anti-VEGF treatment is the mainstay of treatment with good results. A combination of photodynamic therapy and bevacizumab has also been shown to regress choroidal neovascularization. Furthermore, early intervention has been shown to be associated with significantly better outcomes (1).

Patients with an established diagnosis of angioid streaks are more susceptible to choroidal rupture and should be encouraged to wear rigid eye protection to prevent accidental blunt trauma to the eye that can cause choroidal rupture and multiple subretinal bleed, especially during participation in ball sports.