Angle recession glaucoma (ARG) is a secondary open angle glaucoma that is associated with ocular trauma. Recession of the anterior chamber angle is a common slit lamp and gonioscopic finding following concussive ocular trauma. A small percentage of these people go on to develop glaucomatous optic neuropathy and vision loss days, months or even years later [1]. There are reports of glaucoma developing up to 50 years after the injury[2].

Angle recession was first described by Collins in 1892[3]. The association between trauma and unilateral glaucoma was made by D'Ombrain in 1949[4]. However it was not until 1962 when Wolf and Zimmer correlated trauma with angle recession and subsequent glaucoma in a case series of six patients.

It has been reported that up 60% of eyes with non-penetrating or concussive trauma will develop some degree of angle recession[5]. Angle recession is also strongly associated with traumatic hyphema with studies reporting a 60-100% incidence [6]. The most commonly reported forms of trauma associated with ARG are recreational activities and assault[7]. However, a portion of patients never recall a specific event despite other clinical signs of trauma such as iris sphincter tears or traumatic cataract.

The main risk factor for angle recession is trauma. Girkin, et al. used the United States Eye Injury Registry to demonstrate that 3.39% of people go on to develop ARG at 6 months following blunt ocular trauma[8]. A 10 year prospective study of 31 eyes by Kaufmin and Tolpin reported that 6% with angle recession will go on to develop glaucoma[1]. Since it appears that angle recession per se does not always lead to glaucoma, there may be other factors at play that have not yet been discovered.

Several publications have demonstrated that the greater the number of clock hours of angle recession, the greater the likelihood of developing elevated pressures and glaucoma. Authors have reported varying amounts ranging from 180 to 240 degrees as “at high risk,” but most studies confirm that greater than 180 degrees of recession makes glaucoma more likely [9][6][10]. Interestingly, one study reported 50% of ARG patients will go on to develop open angle glaucoma in the contralateral eye[11]. This has led to the hypothesis that angle recession does not directly cause elevated IOP, but may accelerate the process in an already at risk eye. Conversely, this could point to complex factors in glaucomatous pathophysiology with the trauma leading to future bilateral glaucomatous risk.

More recently, Sihota, et al. found the presence of increased pigmentation at the angle, elevated baseline IOP, hyphema, lens displacement, and angle recession of more than 180° were significantly associated with the occurrence of chronic glaucoma after closed globe injury[12]. 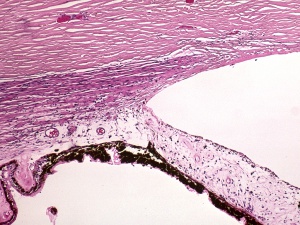 The proposed mechanism of recession is that blunt trauma forces aqueous humor laterally and posteriorly against the iris and angle. This exerts traction on the iris root leading to a tear between the longitudinal and circular muscles of the ciliary body. With enough force, the ciliary arteries can be broken, leading to a hyphema. This may explain the higher incidence of angle recession in those with traumatic hyphema. This initial insult may damage the TM and Schlemm’s canal leading to an early IOP spike. However long term scarring and fibrosis of the TM/Schlemm’s canal can lead to elevated pressure years down the road.

Two other proposed mechanisms to explain the elevated pressures are 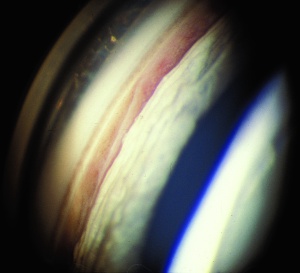 Other evidence of ocular trauma should clue the clinician to look for angle recession. Such findings might include iris sphincter tears, corneal scars, Vossius ring, iridodialysis, iridodenesis, phacodenesis and hyphema.

Angle recession glaucoma is similar to other forms of open angle glaucoma in that it typically causes painless progressive vision loss. 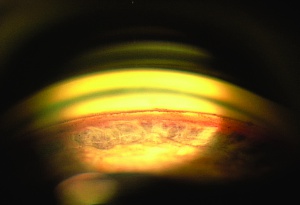 The differential generally applies to that of unilateral glaucoma including

Treatment for ARG is generally the same as for primary open angle glaucoma save for a few exceptions noted below.

Topical aqueous suppressants are effective including beta-blockers, carbonic anhydrase inhibitors and alpha agonists. Prostaglandin analogues should be avoided in the acute phase of trauma because of their potential to be pro-inflammatory. However prostaglandin analogues have a theoretical benefit of bypassing the dysfunctional trabecular meshwork by increasing uveoscleral outflow and can be used after the acute phase is over. Pilocarpine should be avoided as it has been reported to exacerbate angle recession[14].  If pupillary block is present from lens dislocation, cycloplegics may be helpful until surgery is performed.

Argon laser trabeculoplasty has yielded rather unsatisfactory results and fails to lower the IOP long term in this group of patients[15]. Selective laser trabeculoplasty has not been formally studied but is likely to also be ineffective.  Trabeculectomy with MMC has shown to be successful in lowering IOP in ARG[16]. However, patients with ARG have demonstrated an increased risk of failure after trabeculectomy[17]. Glaucoma drainage devices have demonstrated some benefit, though their success rates are lower than with other types of glaucomas. Cyclodestructive procedures may be an alternative option for eyes with limited visual potential.

Angle recession glaucoma are generally more difficult to control medically and surgically than other types of glaucomas. Patients should be adequately counseled and follow-up examinations should be performed regularly.