Asteroid hyalosis (AH) is a common (1 in 200 person) clinical entity in which calcium-lipid complexes are suspended throughout the collagen fibrils of the vitreous. [1]

Benson, in 1894, was the first to describe accurately and to differentiate AH from synchysis scintillans. Because the vitreous particles resembled “stars on a clear night” he termed the condition asteroid hyalitis, but Luxenberg and Sime later suggested the term “asteroid hyalosis” in view of the absence of inflammatory changes.[2] Clinically, the AH granules move with the movement of eye and do not gravitate downwards like synchysis scintillans.

Histologically, asteroid bodies are rounded structures that stain positively with alcian blue and positively with stains for neutral fats, phospholipids, and calcium. The bodies stain metachromatically and exhibit birefringence. Occasionally, asteroid bodies will be surrounded by a foreign body giant cell, but the condition is not generally associated with vitreous inflammation. 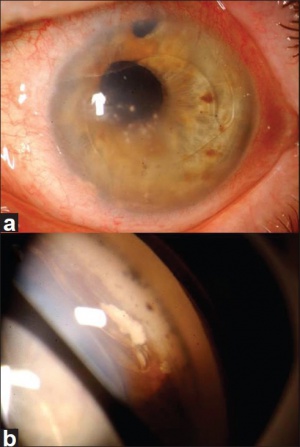 Figure 1: An 80-year-old asymptomatic woman was referred with a white iris mass suspicious for metastasis or endophthalmitis (a) that proved on examination to be asteroid bodies, some within the central aqueous within gel (a) and others bare in the inferior angle (b).[3]

AH is a relatively uncommon, usually seen unilaterally in patients over 55 years of age. It has no race predisposition, but occurring with much greater frequency in men (1.4 %) than in women (0.6%).[4]

The reported incidence in the general population is 1% according to the Australian Blue Mountains Eye Study[4] and 1.2% prevalence which reported in the U.S. Beaver Dam Eye Study.[5]

The Blue Mountains Eye Study also found no evidence to support earlier observation of a significant association between asteroid hyalosis and diabetes, heart disease, higher body mass index, a history of gout and of higher levels of alcohol consumption, as reported by previous studies.[6]

Increased odds were found for associations with asteroid hyalosis, but none of these associations were statistically significant.[4]

According to an unique epidemiological autopsy cohort study from the University of California at Los Angeles (UCLA) autopsy eye database from 1965 to 2000 where 10 801 patients were examined for AH and its systemic associations yielded a higher prevalence (1.96%) of AH than previous studies.

No statistically significant association between AH and ARMD or DM was found. Most patients (86%) had unilateral vitreous deposits and IOP values were lower in the affected eye. PPV combined with phacoemulsification proved to be a safe and effective therapy in selected patients.[8]

The exact mechanism of formation of asteroid bodies is not known; however, element mapping by electron spectroscopic imaging has revealed a homogeneous distribution of calcium, phosphorus, and oxygen. The electron energy loss spectra of these elements show details similar to those found for hydroxyapatite. Immunofluorescence microscopy has revealed the presence of chondroitin-6-sulfate at the periphery of asteroid bodies; and carbohydrates specific for hyaluronic acid were observed by lectin-gold labeling to be part of the inner matrix of asteroid bodies. Thus, asteroid bodies exhibit structural and elemental similarity to hydroxyapatite, and proteoglycans and their glycosaminoglycan side chains appear to play a role in regulating the biomineralization process.[9]

Although AH has been associated with several systemic diseases, the causes and mechanisms of AH formation remain unknown. Three major studies mentioned above conclude that AH is primarily associated with aging.

The Australian Blue Mountains Eye Study of 3654 patients aged 49–97 years confirmed a similar 1% prevalence of AH. In this group, the prevalence of AH also increased with age from 0% of persons 49–55 years of age to 2.1% of persons aged 75–97 years, and AH was again more prevalent in men.[4] A higher, 1.96%, prevalence of AH was observed in the third study from the University of California at Los Angeles (UCLA) autopsy eye database from 1965 to 2000 where 10 801 patients were examined.[7] This retrospective study, which demographically matched the characteristics of the US population on the 2000 census, also showed an inverse relationship between AH and posterior vitreous detachment. Although these three major studies found AH to primarily correlate with ageing, others suggest that AH is associated with diabetes mellitus (DM), hypertension, hypercholesterolemia or lipidemia, or increased serum calcium levels. Of these, a link to DM is most often cited; however, this link is also the most controversial. Although AH predominantly occurs unilaterally, AH should be bilateral if linked to systemic diseases such as DM because each eye is equally exposed to hyperglycemia. Bilateral ‘trends’ of AH have been suggested among diabetic populations UCLA autopsy study[7], which observed a statistical association between diabetes and bilateral AH before adjusting the data for age and sex. However, in the UCLA study, AH was present only in 20 of 780 diabetics. AH formation in diabetics has been suggested to be secondary to retinal vascular changes. The overall relationship between DM and AH is further complicated by data suggesting that AH may arrest the process of vitreous collapse or contraction in eyes with proliferative diabetic retinopathy.[10]

Traditional methods of funduscopic visualization can be limited in the AH eyes, and alternative imaging modalities such as Flourescein Angiography(FA) and ultrasonography may not provide adequate diagnostic capabilities to yield accurate diagnoses.[11] In the National Screening Program in England, Asteroid hyalosis was the cause of ungradable photographs in approximately 0.4% of the screened population of people with diabetes and was the cause of 8.5% of all ungradable retinal screening photographs during the time of the study. Suggested that another method of screening, such as slit lamp biomicroscopy and possibly optical coherence tomography, is required for such patients.[12]

Complete PVD appears to be unlikely to occur in eyes with AH. In addition, spontaneous PVD in eyes with AH might lead to vitreoschisis or residual whole layer or posterior vitreous cortex, possibly due to anomalous vitreoretinal adhesion.[13]

OCT identified the specific retinal anatomical abnormality, allowing for definitive diagnosis. FA and/or funduscopic evaluation assisted the diagnosis, but appropriate disease management should be ultimately guided by OCT.[11] OCT uses an 830-nm wavelength light beam that is less susceptible to distortion from asteroid bodies and other media opacities. With dense asteroids, however, the light beam can be absorbed or reflected. This degradation may occur with both incident and reflected light beams, leading to areas of lower signal strength and shadowing of certain areas on the retina. OCT technicians can minimize these image artifacts by properly positioning the patient for the clearest OCT scan, adjusting the focus knob to the most highly saturated diopter, using the polarization function, and ensuring proper corneal lubrication. OCT in the setting of media opacity of the vitreous cavity is not always fruitful. In eyes with varying degrees of vitreous hemorrhage, the 830-nm wavelength light beam of OCT is absorbed by blood, making imaging often imprecise or impossible. Absorption of the incident light by asteroid bodies is less consequential.[11]

In the cases when on the clinical examination revealed dense asteroid hyalosis obscuring the fundus with a limited view Optos ultra-wide field imaging also can be helpful in the diagnosis and management of retinal/ choroidal lesions.[14]

Asteroid Hyalosis rarely causes visual disturbances, and surgical removal is only rarely required. There have been a few reports of AH in patients with RP.[15] In some cases even a standard three-port vitrectomy needed to remove the vitreous opacity because of progression of the vitreous opacity and decreased vision.

The study at the Department of Ophthalmology, Kyushu University Hospital (Fukuoka, Japan), based on cohort of 320 patients with RP, the features of AH, unexpectedly found different from those of the previous reports (3.1%). Also were detected 2 patients younger than 50 years; bilateral AH was present in 4 of 10 cases; and was detected rapidly progressive AH in 2 cases. The exact mechanism of these discrepancies is unclear. However, one possible explanation may be that the vitreous condition in eyes with RP is different from that in normal eyes because of the blood–retinal barrier breakdown seen in patients with RP.[15]

Dramatic loss of visual acuity is unusual. Although there have been reports of surface calcifications of intraocular lenses in patients with asteroid hyalosis.[16]

Also there are some reports of asteroid hyalosis prolapse into the anterior chamber, simulating metastasis.[3]