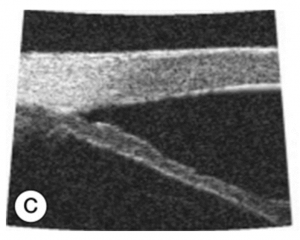 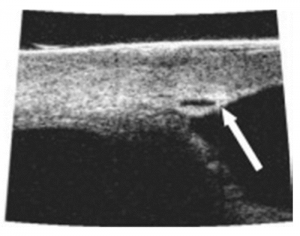 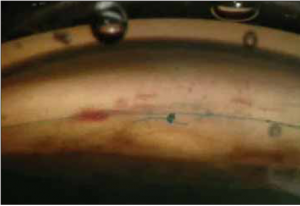 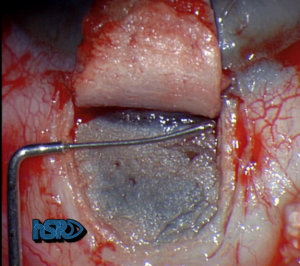 Lowering intraocular pressure (IOP) is the only proven therapy for glaucoma. Traditional glaucoma filtration surgeries such as trabeculectomy, are highly successful in lowering IOP but have a very high rate of complications. This has led to the search for safer forms of glaucoma surgery. While surgeries like trabeculectomy seek to create a fistula that enables aqueous to be diverted from the anterior chamber into the subconjunctival space bypassing the natural outflow system, canaloplasty is a surgical technique that promotes outflow of aqueous via the natural outflow pathways through the trabecular meshwork (TM) and into Schlemm's canal (SC). It dilates SC with multiple direct injections of an ophthalmic viscoelastic device (OVD) administered in a controlled fashion through a flexible microcatheter that is threaded through the entire length of SC. To maintain this dilation, an intraluminal suture is placed within SC and tied tightly to apply a permanent tensioning effect. This not only keeps SC open and prevents its collapse but it also has the effect of putting the TM on stretch to make it more permeable to aqueous. Figures 1-3 Since filtration of aqueous is being directed into SC and the existing natural outflow pathways this should make this form of surgery unlikely to produce hypotony and all its related complications making it much safer than traditional glaucoma filtration surgeries.

Canaloplasty is a modification of viscocanalostomy, a form of non-penetrating glaucoma surgery. In this older technique, first introduced by Stegman and colleagues,[1] OVD was injected into SC on either side of an external scleral dissection site with a metal cannula. Figure 4 The cannula, because it was not flexible, could only be extended into SC a limited distance and thus could only dilate a limited portion of the canal on either side of the dissection site. The injection of OVD caused an increase in SC dimensions leading to micro-ruptures in the inner wall of the canal, as well as adjacent TM. This created a direct connection between the anterior chamber and the lumen of the canal. The scleral flaps created to uncover SC were sutured watertight to avoid formation of a filtering bleb. Compared to trabeculectomy, viscocanalostomy proved to be a very safe procedure with fewer complications but its IOP lowering was inferior.[2] Its long term efficacy was disappointing presumably due to eventual re-collapse of SC in the postoperative period. [3] Canaloplasty has the advantage of being able to dilate SC along its entire length utilizing a flexible microcatheter.[4] It also has the advantage of using a permanent tensioning suture remaining in SC to maintain its dilation over time. Koerber reported a comparison of canaloplasty performed in one eye compared with viscocanalostomy in the contralateral eye. The viscocanalostomy eyes had a postoperative IOP of 16.1 +/- 3.9 on 0.4 +/- 0.5 medications with 35.7% complete success and 50% unqualified success. By contrast the canaloplasty eyes had an IOP of 14.5 +/- 2.6 on 0.3 +/- 0.5 medications with 60% complete success and 86.7% qualified success. [5]

Canaloplasty has several advantages over trabeculectomy. Under most circumstances, as long as goniopuncture is not performed, there is no bleb so bleb related complications are avoided. Hypotony and all its related complications can also be avoided under most circumstances since aqueous is allowed to drain via the natural outflow system so IOP should not be able to fall below episcleral venous pressure. Postoperative care and follow up is also simpler and less rigorous and visual recovery is typically more rapid. However, canaloplasty is also a more technically challenging surgery than trabeculectomy and typically does not produce IOP quite as low. It also scars an area of conjunctiva that may increase the risk of trabeculectomy failure in the future if it should be needed.

Indications: Canaloplasty is generally for open angle glaucomas. It is especially good for young patients with a clear lens and is less likely to cause cataract progression. It should also be considered for high myopes who would be at high risk for hypotony with a trabeculectomy surgery. It would also be excellent in ahakic patients where vitreous may obstruct the sclerotomy or tube in traditional glaucoma filtration surgeries.

Canaloplasty requires the use of a 200 μm diameter flexible microcatheter with a blunt atraumatic 250 μm tip (iTrack 250 A, iscience Interventional, Menlo Park, CA). Figure 5 This microcatheter has an internal lumen for injecting OVD. Figure 6 The OVD is injected via a screw driven syringe that allows for precise aliquots to be injected. Figure 7 The microcatheter also has an optical fiber to transmit light and is typically used with the battery powered iLumen Fiberoptic Illuminator (iScience Interventional, Menlo Park, CA) which allows the tip of the microcatheter to glow red or blink to indicate its position within SC during the procedure.

Antibiotics are typically given for one week and topical corticosteroids are used and tapered over 4 weeks. At one month postoperatively, if the IOP is not at target a YAG laser goniopuncture or bleb needling can be performed to convert the procedure into a full thickness filtration surgery.

If the deep scleral flap is dissected too deep the trabeculo-descemetic window can be perforated. Figure 15 If this occurs a sclerotomy can be created with an iridectomy and the procedure can be converted to a trabeculectomy.

Lewis' study reported only 16 adverse events in 12 eyes. Mild hyphema is common and was seen in 10.2% of eyes and all except in 3 eyes were resolved by 1 month. Figure 16 A Descemet detachment with intrastromal corneal blood was seen in 3.2% of eyes. Figure 17 3 eyes had persistent IOP elevated > 30 within the first 90 days. 2 were converted to trabeculectomies and 1 underwent YAG goniopucture. Figure 18A and Figure 18B 7 eyes had increased IOP in the late postoperative course of which 5 required procedures including goniopuncture, iridoplasty, cyclophotocoagulation, and a trabeculectomy. There was only a 0.6% rate of early hypotony but there were no flat anterior chamber, choroidal detachment, or endophthalmitis reported.[9]