Vitrectomy is a surgical procedure to remove the vitreous gel in the treatment of posterior segment pathology. The most frequent complication of pars plana vitrectomy (PPV) is cataract formation, particularly nuclear sclerotic cataract. In a large national registry data-based study from the UK that involved more than 2000 eyes with PPV performed for different indications, the risk of cataract surgery following PPV was in the range of 40% and the 1-, 2-, 3-, and 5-year cataract surgery rates were 50, 70, 75, and 85%, respectively.[1][2]Although the exact mechanism of cataract formation or progression after PPV is not clear, with one of the leading theories postulating that  increased oxygen tension after PPV causes oxidative damage of crystalline lens proteins and cataract progression. Other theories include altered milieu following vitreous removal, trauma, and iatrogenic causes.[3] Older age, use of tamponade, and complex extended PPV can all be contributing factors to cataract progression after PPV.

Cataract surgery after vitrectomy poses challenges to the surgeon and should have careful perioperative planning for the best visual outcomes. The absence of the vitreous humor causes anatomical changes that can lead to a more difficult surgery. Successful cataract surgery can help restore vision and provide a clear view for retinal health monitoring.

Before proceeding with cataract surgery, a thorough review of the patient’s ocular history should be obtained, including onset of symptoms, prior surgeries, history of trauma, and history of intravitreal injections. Of note, if a patient develops a white cataract shortly after vitrectomy or injection, the surgeon should consider the high likelihood of iatrogenic lens capsule violation and consider referring to a vitreoretinal specialist. Even if a cataract forms gradually after vitrectomy, consider the possibility of peripheral posterior capsule injury in cases with significant posterior subcapsular cataract (Figure 1). 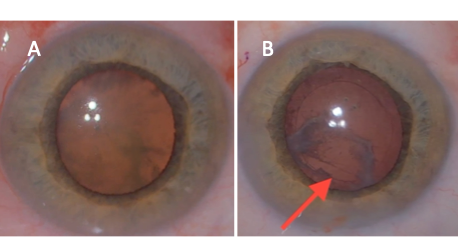 Figure 1: A. Patient with significant posterior subcapsular cataract after vitrectomy. B. After lens removal, a linear capsular opening could be seen along the path of the vitrectomy probe, with a surrounding posterior capsular plaque.

Similar to non vitrectomized eyes, optical biometry was found to be more accurate than ultrasound biometry. If a cataract is too dense for optical biometry, immersion ultrasound can be utilized. The surgeon should also be aware that intraocular lens (IOL) calculations can be slightly less accurate due to axial length discrepancies.[4] There is evidence of systematic myopic shift induced in phacovitrectomy eyes for the widely used validated vergence based formulas (Barrett UII, SRK/T, Holladay, Hoffer Q, and Haigis).[5] These formulas have good refractive outcomes in phacovitrectomy; although, the Kane formula, a modern IOL lens power calculation formula, was found to have the highest percentage of eyes within + 0.25 diopters of aimed post-operative refraction.[5] In silicone-filled eyes, IOL-selection can be even more challenging. Modern formulas such as Barrett UII, Hill-RBF, and Kane have been shown to have higher predictability of postoperative refraction with a lower variance of error.[6] Additionally, it has recently been found that eyes that have had prior vitrectomy are at greater risk of IOL-tilt and decentration.[7]

Multifocal lenses and other optically advanced IOL selections should be evaluated with extreme caution due to the risk of IOL-tilt and decentration.[7] In eyes where PPV was done for macula off retinal detachment, it is important to ensure that the axial length measurement was undertaken after the retina was attached and not prior. This is to avoid false reading resulting from the retinal detachment. All patients should be counseled regarding surgical expectations.

The vitreous provides posterior support during cataract surgery, and this is critical in maintaining a normal anterior chamber depth (ACD). Eyes that have undergone prior vitrectomy may have an exaggerated ACD due to the lack of vitreous support. Lowering the infusion pressure can help normalize the ACD. Additionally, a retrobulbar or sub-tenon’s anesthetic block may provide posterior pressure for support.

When deciding on wound construction, a short tunnel corneal incision may be beneficial since a long corneal tunnel can result in instruments more vertically oriented causing corneal distortion. Proper wound construction will also aid with less wound leakage during surgery.

The phenomenon of iris-diaphragm retropulsion syndrome (LIRDS), or reverse pupillary block, is especially common in vitrectomized eyes. Due to the laxity of the iris-lens diaphragm, the pupil border becomes stuck against the anterior capsule, and the phaco infusion becomes trapped in front of the iris, which dramatically increases anterior chamber pressure and depth. The pupil will also appear widely dilated (Figure 2A). LIRDS increases the risk of intraoperative aqueous misdirection syndrome, pupillary constriction, and post-operative inflammation.[8] The LIRDS can make surgical maneuvers difficult, and in cases under topical anesthesia, may also be painful for the patient. To relieve this situation, the iris may be lifted off the capsule with the chopper or another blunt instrument to allow fluid equilibrium between the anterior and posterior chambers.[8][9] Maintaining the fluidics and a stable anterior chamber is crucial. Lower infusion pressure, properly constructed wounds, and gentle handling of surgical instruments with care of not removing instruments quickly, can help maintain a stable ACD. Unfortunately, after reverse pupillary block occurs during surgery, the pupil often constricts when it is reversed (Figure 2B).

Figure 2: A: Deep anterior chamber and widely dilated pupil in iris-lens diaphragm retropulsion syndrome/reverse pupillary block. Note the vertical entry angle of the chopper and phaco, necessary to reach down to the lens. B: after reversal of the retropulsion syndrome, the pupil becomes constricted.

The capsulorrhexis is one of the most important steps in phacoemulsification, and it can be more challenging in post-vitrectomized eyes due to the exaggerated ACD and the lack of posterior support of the lens. More pressure on the anterior lens capsule is typically needed to initiate a capsular flap due to the anatomically decreased resistance. Trypan blue can be considered in cases of a poor red reflex, although the surgeon should be aware that the dye can change the elastic properties of the capsule.[10] If the surgeon is having difficulty initiating a capsulorrhexis flap, then there should be concern for occult zonular dialysis. The difficulty in initiating the flap in these cases is caused by a backward movement of the lens due to the lack of zonular counterpressure or excessive lens movement during the progress of the capsulorrhexis. Capsular striae can be seen when attempting to initiate the capsulorrhexis flap in these cases.[11]

Hydrodissection can be performed in uncomplicated cases. If there is concern from preoperative or intraoperative examination of posterior lens trauma or touch, hydrodissection should be avoided. Instead, hydrodelineation and viscodissection techniques are preferred. For nucleus removal, chopping techniques may be better suited for these cases due to the exaggerated ACD. The surgeon should also be prepared for the possibility of needing a capsular tension ring or segment if there is significant zonular compromise. If there is a posterior capsular rupture from cataract surgery or prior vitrectomy, the lens should be brought anterior out of the capsular bag with viscoelastic material placement. A lens scaffolding technique may be employed to lower the risk of dropped lens fragments (Figure 3). If a patient requires intravitreal injection at time of cataract surgery, for example to manage a coexistent cystoid macular edema, then it is best given before removing viscoelastic material with the eye being firm to avoid inadvertent retinal injury. 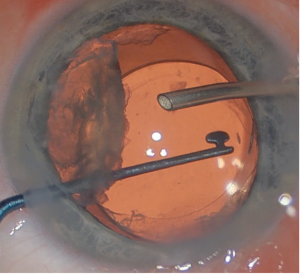 Figure 3: Lens scaffold technique. The remaining hemi-nuclear fragment has been held in the angle with viscoelastic and with the irrigation wand, while complete cortical removal was done. A 3-piece lens is now injected, and the optic captured by the anterior capsule rim. The phaco handpiece can now be re-introduced to complete phacoemulsification. It is critical to remove all cortex before doing this technique, as doing optic capture will trap remaining cortex between the anterior and posterior capsular leaflets. When in doubt, it’s better to leave aphakic.

Careful complete removal of viscoelastic material is recommended to avoid acute post-operative intraocular pressure spike. It can be difficult to achieve complete removal of under the IOL if there are capsular or zonular problems. In these cases, prophylactic oral acetazolamide should be considered and IOP has to monitored in the early postoperative period.

Cataract formation is common after vitrectomy, and cataract surgery can be more challenging in these eyes. With careful perioperative planning and techniques, cataract surgery can be performed successfully by an experienced surgeon. There should be close collaboration between the anterior segment surgeon and retina surgeon to allow safe surgery, especially in cases of small pupil and suspected capsular violation.