Cerebral visual impairment (CVI) is defined as vision loss resulting from damage to the retrogeniculate pathway, in the absence of any ocular pathology. With increased survival of preterm babies and better perinatal care, CVI has emerged as one of the leading causes of visual impairment around the globe. Concomitant causes of visual impairment reported in children with multiple disabilities may be secondary to primary ocular pathology such as uncorrected refractive error, cataract, nystagmus, retinopathy of prematurity (ROP), optic nerve atrophy and delayed visual maturation (DVM). The prevalence of CVI in childhood has been steadily rising over the past few decades from a reported incidence of 36 per 100,000 in the late 1980s to 161 per 100,000 in 2003.[1][2]

The term cerebral visual impairment is preferred over cortical blindness, as the central nervous system remains plastic and the presence of extra-geniculostriate visual pathways precludes total loss of sight, even when there is complete destruction of the striate cortex. Cerebral visual impairment is preferred over cortical visual impairment owing to the subcortical involvement of the optic radiations in premature infants. The sequelae of perinatal injury are directly related to the timing, degree, duration, and mechanism of damage to a child’s brain. Management of children with CVI requires a combined and coordinated effort between the ophthalmologist, neurologist and rehabilitation services.

CVI is commonly diagnosed when there is loss in visual function in the absence of damage to anterior afferent visual pathways or ocular structures. Delayed visual maturation is thought to be on the spectrum of CVI, resulting from a temporary dysfunction of higher cortical centers. CVI, however, occurs due to insults at the level of: 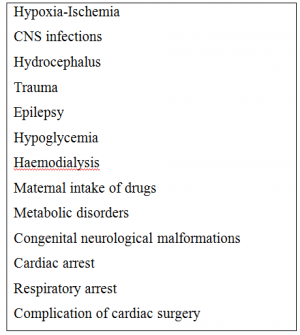 The various etiologies for cortical visual impairment have been summarized in Table 1, and the detailed pathogenesis of each of these etiologies has been described below.

Hypoxic-ischemic brain injury is, by far, the most common cause of pediatric CVI. [3] The resulting pattern of injury caused by the hypoxic insult, however, is mainly defined by the age at which the insult occurs, and differs greatly between term and pre-term children. In term infants, the areas between the circulation of anterior and middle cerebral arteries and medial and posterior cerebral arteries are the most typically affected as they are watershed areas of the cerebral cortex. Loss of vascular flow autoregulation induced by hypoxia leads to hypoperfusion of these watershed territories, resulting in infarction of the frontal and parieto-occipital areas. The striate cortex is frequently affected, and occipital visual areas and temporal and parietal cortices, are also commonly involved. Preterm neonates, on the other hand, rarely suffer parasagittal infarctions from hypoxic-ischemia. More commonly, periventricular deep white matter is involved, especially when the insult occurs earlier, specifically between 24 and 34 weeks of gestation. There is a transient, susceptible watershed zone in the periventricular white matter that later is replaced with the adult vasculature. Long penetrating vessels derived mainly from the middle cerebral arteries run from the pial surface and terminate in the deep periventricular white matter. Active development of this periventricular vasculature occurs during the last 16 weeks of gestation. The number of short penetrators and anastomoses between the long and short penetrators increases in the third trimester with a consequent decrease in vulnerable end zones and border zones. Capillaries in this region are prone to hemorrhage from hypoxic-ischemia.

As a result, of hypoxic insult, the germinal matrix produces glial and neuronal cells which migrate eccentrically to populate the cerebrum. Additionally, immature oligodendrocytes and subplate neurons which are present around the ventricles, are more vulnerable to ischemia than mature oligodendrocytes located elsewhere. All of this explains the specific pattern of damage that characterizes periventricular leukomalacia (PVL).

Meningitis and hydrocephalus were considered to be the most common causes of CVI in past.[4] In more recent series, infections account for 11.8% to 15% of cases of CVI.[5] The occipital cortex is more susceptible to damage produced by Haemophilus influenzae, and hence, it is the most common organism causing CVI. Pneumococci, meningococci and herpes simplex virus are other causative agents, which have been implicated to cause ocular and cerebral visual problems.[6] Onset of visual impairment is typically late in the course of the infection, and multiple accompanying neurologic sequelae commonly occur. Different mechanisms by which infection might injure the brain include thrombophlebitis, arterial occlusion, hypoxic-ischemic damage, venous sinus thrombosis and hydrocephalus.

Hydrocephalus affects vision by causing optic atrophy through various mechanisms, and can also affect posterior visual pathways which run close to lateral ventricles. A combination of anterior and posterior visual involvement is frequent. Although ventricular dilatation can occlude the posterior cerebral arteries, chronic distention of the posterior cortex is a frequent mechanism by which hydrocephalus causes CVI. It is well known that shunt malfunction can cause CVI, but paradoxically, rapid correction of raised intracranial pressure by shunting can also occasionally cause CVI. Additionally, high intracranial pressure caused by untreated hydrocephalus can cause secondary optic atrophy, compounding any associated CVI.

Head trauma is another cause of pediatric CVI (approximately 4% of cases as reported in two studies).[7] Damage may be transient or permanent. Shaken baby syndrome is a common cause of post-traumatic CVI. Transient vision loss in children can also occur after trivial injuries, and may be accompanied by headache, confusion, drowsiness, vomiting, and seizures.

Visual impairment in CVI can be as severe as no light perception to normal visual acuity. Cognitive visual function may be impaired in most of these children leading to misinterpretation regarding what is in the visual field, and where things are visuospatially. Vernier acuity has been found to be more affected than grating acuity. There is some evidence that dorsal stream magnocellular pathway deficits may be more common in children with CVI.

Children with PVL frequently have hypermetropia in combination with astigmatism. Hypermetropia is a common refractive error in children with cerebral palsy and can be due to accommodative dysfunction.

Infantile exotropia is more common than esotropia in patients with cerebral visual loss. On the contrary, children with PVL tend to present with esotropia, which should be differentiated from infantile esotropia.

A specific trait of strabismus in these patients is dyskinetic strabismus, where esotropia can transform to exotropia on a momentary basis. Repeated evaluation and frequent deviation measurements are therefore crucial before planning any surgical intervention for observed ocular misalignment. Nystagmus is a common feature indicating subcortical rather than cortical damage, and may also be associated with concomitant anterior pathway diseases, such as optic nerve or retinal disease.

Optic atrophy is common and can be secondary either to hypoxia involving the optic nerves or papilledema, as in cases of hydrocephalus. In a study done by V. Khetpal et al,[7] optic atrophy was found to be a feature in 40% patients of cerebral visual loss.

Patients with CVI most commonly have bilateral inferior field defects, though homonymous hemianopia can also be present in association with hemiplegia, and can be explained by interruption of axons of the optic radiations.

Diagnosis of CVI is of utmost importance in a child with evidence of low vision in the setting of a normal structural ocular examination. However, suspicion and education should begin in the immediate neonatal period, when risk factors can be readily identified.

In the past, investigators heavily relied on findings of VER and EEG for a diagnosis of cerebral visual loss. However, a normal flash VER recording can be obtained even in patients with cerebral visual loss, as results are mediated by the extra-geniculostriate visual system.

EEG was previously considered a valuable diagnostic tool, classically showing multiple eleptiform waves originating from the occipital lobe. However, due to the availability of high-resolution imaging, the role of EEG and VER in making a diagnosis of CVI has lessened in recent years. 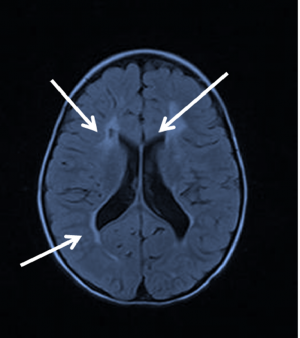 CT and MRI help to differentiate between the degree of possible optic nerve involvement, and suspected cortical involvement, and can help provide clues about prognosis and visual recovery. The extent and location of brain damage is important. MRI is always recommended in children with low APGAR scores.[10]

The presence of acute brain injury seen on brain MRI attributed to hypoxic-ischemia is now considered a significant feature of CVI, as per a recent task force on neonatal encephalopathy. Severity of visual impairment may be predicted by the clinical severity of HIE shown at birth. The pattern of lesions on MRI can be broadly classified into 3 categories: periventricular leukomalacia, diffuse cerebral atrophy, and multi-cystic encephalopathy.

Children with periventricular leukamalacia, encephalic cyst and diffuse cerebral atrophy are much less likely to have significant gains in visual function, while children with mild damage on MRI are more likely to have a better prognosis.

Some degree of visual recovery is seen in the vast majority of children with cerebral visual impairment, although the improvement tends to be gradual over months, and the exact mechanism is unclear. Lambert et al have summarized various theories proposed for the visual improvement and suggest that the initial insult producing cerebral visual impairment may not cause cellular death but rather just interrupt the normal protein synthesis of neurons, thereby causing a delay in myelination, dendrite formation and synaptogenesis. [11]

It has now been postulated that improvement of sight in patients of CVI is actually a form of delayed visual maturation.

The treatment of CVI requires a multi-faceted approach with early development specialists, neurologists, physical and occupational therapists, and eye care professionals. Any concomitant ophthalmic disorders must be treated, including underlying amblyopia and refractive error. Strabismus and motility evaluations can be difficult, especially in the setting of variable strabismus, so a careful approach is necessary prior to proceeding with any surgical intervention. Nonetheless, as early esotropia is more detrimental to visual development than exotropia, large, manifest esodeviations are an indication for early surgery. Undercorrection by 15-20% is usually planned in order to avoid consecutive exotropia over long term follow up, as over-correction is common in this population.[12]

The problems in patients of cerebral visual loss are not just limited to vision, but are complex. A multidisciplinary approach is thus, necessary not just for diagnosis but also for management.

Rehabilitative support must include an approach that addresses the psychosocial impact on patients and their families. Various active visual stimulation therapies have been tried for the rehabilitation of patients of cortical visual loss but are not scientifically validated. Light reflex stimulation is a therapy performed in a completely dark and quiet room, whereby a flashlight is shined briefly in each eye, pausing 5 seconds between eyes, for 1 min and repeated 30 times per day. The ability for perceiving an object's outline can be developed by shining a penlight onto a target in a totally darkened room for 1 minute. Simple distinct shapes like circles, triangles, or stars on white cardboard with a black image or black cardboard with a white image shown 10 times a day, can help children to identify shapes.[13] Each child with CVI is likely to have their own unique visual and motor deficits, necessitating a truly individualized approach.