Cerebrotendinous Xanthomatosis (CTX) is a rare and presumably underdiagnosed, autosomal recessive, metabolic storage disorder. CTX is caused by caused by mutations in the CYP27A1 gene, which encodes for a sterol 27-hydroxylase enzyme important in bile acid synthesis. At least 50 pathogenic mutations have been found in the CYP27A1 gene. Sterol 27-hydroxylase deficiency leads to 5-alpha-cholestanol accumulation in the blood and tissues of affected patients; this includes the brain, connective tissue, and the crystalline lens. The hallmark manifestations of CTX have a variable onset and severity, which may lead to delayed-diagnosis and under-diagnosis. Irreversible neurological deterioration is present in late disease.

Eye care professionals are in a unique position to identify and diagnose CTX at a time when serious disability can be prevented. The mean age of diagnosis is 35.5 years, therefore patients are often well into adulthood before receiving a diagnosis and may lose the window of opportunity to prevent irreversible neurologic damage.

The prevalence of CTX in the US population is estimated to be as high as 3 to 5 per 100,000, predicting a minimum number of 8,400 affected individuals. CTX is likely underdiagnosed with known patients in the US numbering less than 100. Approximately 425 cases have been reported worldwide. This disorder is more common in the Moroccan Jewish population with a reported incidence of 1 in 108.

CTX is caused by a mutations in the CYP27A1 gene. This gene is responsible for producing an enzyme called sterol 27-hydroxylase. Under normal conditions, sterol 27-hydroxylase works in a pathway to break down cholesterol into bile acids necessary for the body to digest fats.

Disease-causing mutations in the CYP27A1 gene lead to a deficiency in this enzyme, which decreases the body’s ability to break down cholesterol into a bile acid called chenodeoxycholic acid by preventing critical steps in bile acid synthesis.

As chenodeoxycholic acid (a potent inhibitor of cholesterol 7-alpha-hydroxylase) is decreased, cholesterol cannot be properly excreted in the form of bile acids. These conditions lead to a significant increase in the levels of bile alcohols and levels of cholestanol, a byproduct of abnormal bile acid synthesis. (Fig. 1) 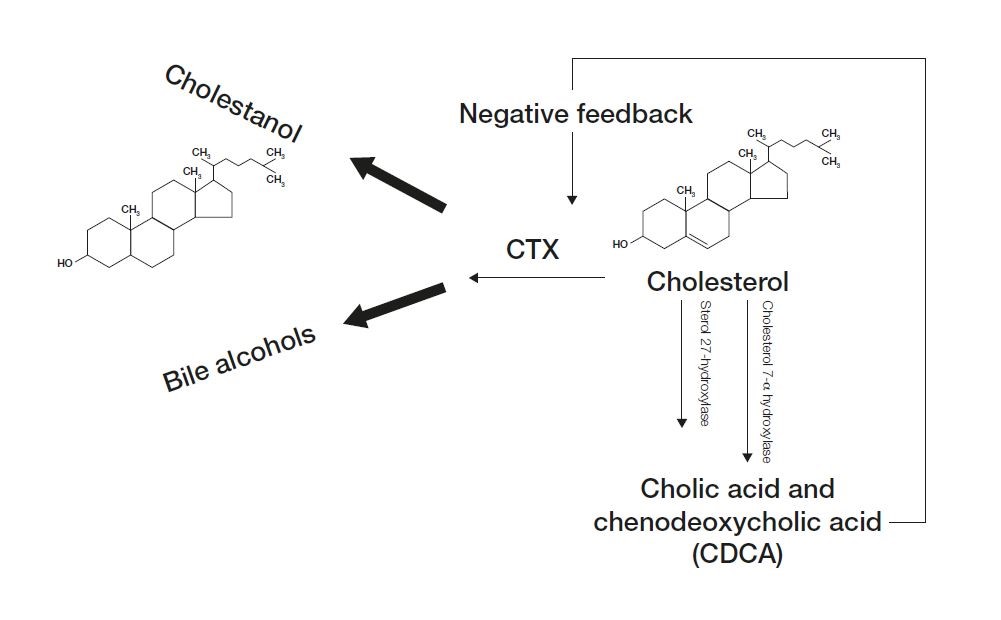 Figure 1: Mutations in the CYP27A1 gene prevent critical steps in the bile acid synthesis that leads to bile acid deficiency, which results in a buildup of cholestanol throughout the body that causes distinctive clinical manifestations. Image permission and courtesy of Retrophin, Inc.

These bile alcohols are excreted in bile, urine, and feces, but cholestanol accumulates, especially in the brain, peripheral nerves, lenses, and tendons, and causes the signs and symptoms of CTX.

Typical clinical characteristics of CTX may include some combination of infantile-onset chronic diarrhea, bilateral cataracts with juvenile onset, tendon xanthomas, psychiatric and abnormal behavioral symptoms, and cognitive and other neurologic impairments. Clinical features are variable in severity and onset. (Fig. 2) 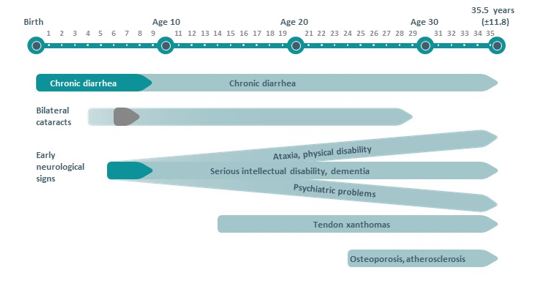 Figure 2: The hallmark manifestations of CTX have variable onset and severity, which may lead to delayed-diagnosis and under-diagnosis. Mean age of diagnosis is 35.5 years. Image permission and courtesy of Retrophin, Inc.

In a report by Pagon RA et al in Cerebrotendinous Xanthomatosis GeneReviews®, the clinical features of 49 individuals diagnosed with CTX from 36 unrelated families were noted. Among the features reported, cataracts were present in 92% individuals, pyramidal signs were observed in 92%, cerebellar signs and peripheral neuropathy were noted in 82%, tendon xanthomas in 78%, cognitive impairment in 78%. In addition, psychiatric symptoms and behavioral changes in 73%, osteoporosis in 65%, diarrhea in 47%, and seizures in 24%.

Bilateral cataracts, caused by cholestanol buildup in the crystalline lens, usually develop within the first 3 decades of life; often between the ages of 4 and 18 years of age. This manifestation is almost a universal characteristic of CTX. These patients develop irregular cortical opacities, anterior polar cataracts, or dense posterior subscapular cataracts. Fleck lenticular deposits may be an early sign of CTX. (Fig. 3) The majority of patients will develop lenticular manifestations prior to significant neurological advancement. 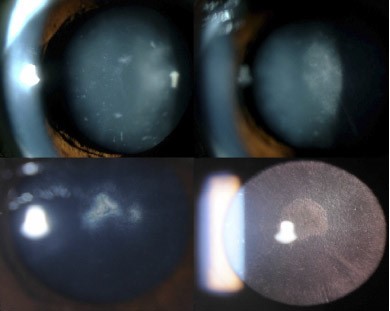 Other ocular findings include palpebral xanthelasmas, optic nerve atrophy, and proptosis. Some studies have shown findings such as retinal vessel sclerosis, cholesterol-like deposits along vascular arcades, and myelinated nerve fibers.

Chronic diarrhea is often the first systemic manifestation of CTX. This may begin when the affected individual is still an infant. An evaluation of an individual with a suspicion for CTX should include a direct inquiry as to a past medical history of unexplained bouts of diarrhea during the childhood period.

Tendon xanthomas, caused by cholestanol buildup in the tendons, usually appear late in the disease, commonly in the second or third decade. Most often these xanthomas occur on the Achilles tendons. These xanthomas can also occur on the extensor tendons of the elbow and hand, patellar tendon, and neck tendons. Xanthomas have also been reported in the lung, bones, and central nervous system.

The presence of tendon xanthomas in a patient with normal plasma cholesterol levels and normal lipoprotein profile should trigger an investigation of CTX as a potential underlying cause.

Neurologic signs and symptoms of CTX usually appear after the second decade. Psychiatric manifestations or learning disabilities may appear earlier in the disease. More than half of affected patients develop dementia, with deterioration of cognitive function starting in their 20s.

Although not generally considered a hallmark manifestation, a significant amount of individuals with CTX have reported seizure activity. Psychiatric symptoms such as behavioral changes, hallucinations, agitation, aggression, depression, and suicide attempts have been documented. Lipid deposits and white matter loss in the brain has been reported in patients with advanced CTX.

Sitosterolemia is an inherited sterol storage disease characterized by tendon xanthomas and by strong predisposition to premature atherosclerosis. However, primary neurologic signs, diarrhea, and cataracts are not present in this disease.

Smith-Lemli-Optiz syndrome (SLOS) has many signs and symptoms of CTX, including juvenile cataract and xanthomas. SLOS is an autosomal recessive disorder associated with mutations in DHCR7 gene that reduces or eliminates the activity of 7-dehydrocholesterol reductase. This enzyme is responsible for the final step of cholesterol production. These patients have learning and behavioral dysfunction, however these patients often present with microcephaly, hypotonia, and hearing/speech problems. Unlike CTX, those with SLOS have hypocholesterolemia.

The diagnosis of CTX is often delayed until the fourth decade of life. CTX should be suspected in patients with some combination of infantile onset diarrhea, juvenile onset bilateral cataracts, adolescent to young adult-onset tendon xanthoma, and adult-onset progressive neurologic dysfunction.

MRI studies of the brain are an important component of the diagnostic workup for CTX. It may show bilateral hyperintensity of the dentate nuclei and cerebral and cerebellar white matter. Other MRI findings may show signal alterations of the cerebral peduncle, corona radiate, and subcortical white matter. It should be known, however, that a normal MRI does not rule out CTX.

Molecular testing for mutations in the CYP27A1 gene using sequence analysis or deletion/duplication analysis can be performed. This is the gold standard for diagnosis. Genetic molecular testing in symptomatic suspected patients and in presymptomatic family members should be considered in consultation with a Geneticist and/or Genetics Counselor. More than 50 mutations in the CYP27A1 gene have been reported to be associated with CTX. The most frequent mutations of the CYP27A1 gene are distributed from exons 1 to 8. The majority of mutations are amino acid substitutions; splice site mutations have also been reported.

Enzyme assays for reduced activity of sterol 27-hydroxylase enzymatic activity can be performed as well.

There are proposed suspicion index tables that include family history, systemic symptoms, and neurologic factors that can be used to help aid in the diagnosis of CTX. Patients with a high suspicion index score (> or =100) should have assessment of serum cholestanol concentrations. Those with high plasma cholestanol concentrations should proceed to CYP27A1 gene sequencing.

There has been no suitable test to screen newborn dried bloodspots (DBS) for CTX, however development of a methodology to enable sensitive detection of ketosterol bile acid precursors that accumulate has been investigated and reported by DeBarber AE et al. In reports, Newborn DBS concentrations of this ketosterol (120–214 ng/ml) were about 10-fold higher than in unaffected newborn DBS (16.4 ± 6.0 ng/ml).

Treatment for CTX is available in the form of oral chenodeoxycholic acid (CDCA). Berginer VM et al. published findings in 1984 showing that long-term treatment of CTX with chenodeoxycholic acid suppressed abnormal endogenous bile acid synthesis, lowered elevated plasma cholestanol levels, and exerted a beneficial effect on the course of neurologic diseases in the majority of the subjects they tested.

Treatment of CTX in the preclinical stage can reportedly prevent the onset of disease complications. Because of this, the value of an early diagnosis for CTX is extremely important.