Pediatric glaucoma is a group of disorders that result in ocular hypertension with subsequent optic nerve damage and vision loss if left untreated. It accounts for 5% of blindness in the pediatric population [1]and affects more than 300,000 children in the world.[2] A diagnosis of glaucoma in childhood carries a tremendous economic burden on caregivers, and the quality of life for these children is lower compared to children without glaucoma. Because pediatric glaucoma is a heterogeneous disease, the Childhood Glaucoma Research Network (CGRN) classification system was developed to provide an organized and unified classification system of childhood glaucoma into seven subsets (glaucoma suspects plus 6 groups of childhood glaucoma).[3]

Childhood glaucoma is diagnosed based on the presence of ≥2 of the following criteria: 1) Intraocular pressure (IOP) of 21 mmHg or more, 2) optic nerve glaucomatous damage such as increased cupping, focal notching, or cup to disc asymmetry of 0.2 or more between both eyes, 3) Corneal changes such as increased corneal diameter or Haab striae, or 4) visual field defects consistent with optic nerve glaucomatous damage. Under the CGRN classification system, childhood glaucoma has been classified as primary or secondary (Figure).[3] 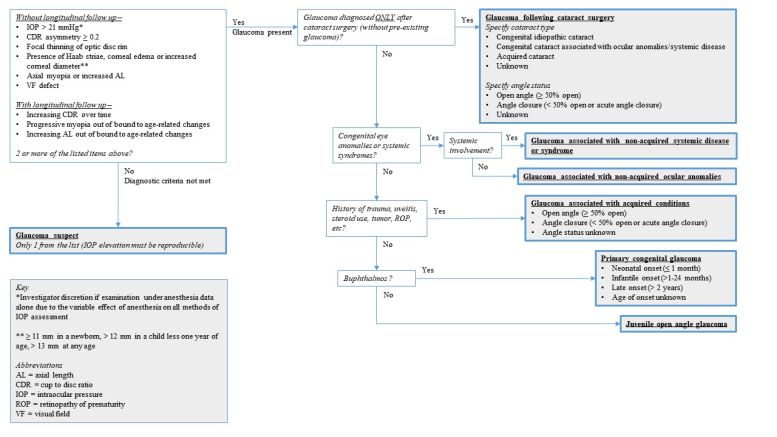 Primary glaucoma can be further subdivided into primary congenital glaucoma (PCG) and juvenile open-angle glaucoma (JOAG). PCG is defined as glaucoma that occurs in the absence of any acquired or non-acquired conditions, with associated isolated angle anomalies with or without iris anomalies. It is usually associated with ocular enlargement. JOAG is defined as open-angle glaucoma that occurs in isolation from any acquired or non-acquired ocular conditions or syndromes, without signs of ocular enlargement (e.g., buphthalmos) and with a normal-appearing angle.

The CGRN also allows classification for children in which the diagnosis of glaucoma may be suspected but not proven. Glaucoma suspect is diagnosed based on the presence of ocular hypertension (IOP > 21 mmHg) on 2 separate occasions, visual field abnormalities suspicious of glaucoma, optic nerve appearance suspicious of glaucoma, or signs of ocular enlargement (e.g., increased corneal diameter or axial length) with normal IOP. This results in a total of seven categories in the CGRN system. One advantage of the CGRN system is its ease of use, unambiguity, and global applicability.[3]

Table 1. Summary of the published studies categorizing the childhood glaucoma patients according to the CGRN classification.

Several studies have used the CGRN classification for the categorization of childhood glaucoma. Bouhenni et al.[4] conducted a study in Akron, Ohio. The study included 104 patients diagnosed with childhood glaucoma or glaucoma suspects from 2008 through 2018. Males represented 64% of the whole cohort. The authors found that glaucoma suspect was the most prevalent category in their study (46%). The authors surmise that this is likely because the study was conducted at a tertiary care pediatric glaucoma center, where a significant number of glaucoma suspects are referred to. PCG was diagnosed in only 3% in this study, which the authors attribute to the fact that most patients with PCG were referred to other, larger ophthalmology clinics in the area.

Another study conducted by Mokbel et al.[6] in Mansoura Ophthalmic Center in Dakahelia, Egypt. They included 207 glaucoma patients (305 eyes) who have been seen at their institute over the period of 4 years. They reported that males represented 63.8% and that PCG was the predominant glaucoma category (55.1%). The authors attribute this to the high rate of consanguineous marriages in this population. In addition, the second most common category in this study was acquired glaucoma, with the majority of these cases being due to a traumatic hyphema.

Lopes et al.[8] conducted a retrospective study in Sao Paulo, Brazil including all patients seen in childhood glaucoma clinic from 2010 through 2018. They found that the majority of patients with childhood glaucoma were males (56.6%) similar to other studies. PCG was the most prevalent category (43.95%) and the JOAG was the least common category being diagnosed in only 2 cases. Glaucoma suspects represented only 13.3% of the whole cohort.

Whereas Surukrattana et al. [12] conducted a study in Thailand including 423 patients (691 eyes) and found that glaucoma associated with non-acquired ocular anomalies was the most common subtype (22.9%) followed by PCG (20.8%). The condition mostly affected boys, with the majority being bilateral cases.

On the other hand, a retrospective study conducted by Tam et al.[5] evaluated the etiology of childhood glaucoma in 246 patients (373 eyes) referred to a tertiary care center in Boston, MA. They reported that GFCS was the most common subtype of childhood glaucoma (36.5%), followed by PCG (29%).

The CGRN system was developed as an international consensus classification for childhood glaucoma. It allows for consistent treatment guidelines to be instituted, which can provide streamlined and consistent care for children with glaucoma. Developing a classification system can also enable the acquisition of data for multicenter research studies. Classifying patients into one of the 7 categories ensures that each patient meets one and only one classification, without overlap.