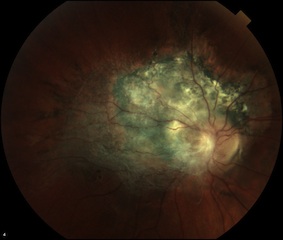 Combined Hamartoma of the Retina and the Retinal Pigment Epithelium in a 24-year-old Female. Courtesy of Stephen Schwartz, M.D. 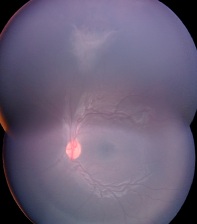 Peripheral Combined Hamartoma of the Retina and the Retinal Pigment Epithelium in a 5-year-old Boy. Courtesy of Timothy Murray, M.D.

Combined hamartoma of the retina and the retinal pigment epithelium is a rare benign lesion found in the macula, juxtapapillary, or periphery that is commonly diagnosed in children and consists of glial cells, vascular tissue, and sheets of pigment epithelial cells.

Although histopathologic descriptions were reported earlier, Gass was the first to use the term combined hamartoma of the retina and the retinal pigment epithelium (RPE) in 1973.[1] It was described in 7 patients as (1) slightly elevated, charcoal grey mass involving the RPE, retina, and overlying vitreous; (2) extending in a fanlike projection toward the periphery; (3) blending imperceptibly with surrounding RPE; (4) covered by thickened grey-white retinal and preretinal tissue; (5) showing contraction of the inner surface; (6) absence of RPE or choroidal atrophy at the margin; and (7) with absence of retinal detachment, hemorrhage, exudation, and vitreous inflammation.[2] In 1984, Schachat et al in conjunction with Macula Society Research Committee reviewed 60 cases of combined hamartoma of retina and RPE.[3] More recently, Shields et al performed a review of 77 consecutive patients with the diagnosis.[4] Combined hamartoma of the retina and RPE is important to recognize as it be confused with such serious entities as uveal melanoma, rpe adenocarcinoma and retinoblastoma.

The etiology of combined hamartomas of the retina and RPE is not known but they are believed to be congenital lesions even thought the lesion has not been reported at the time of birth. .[3] A recent study by Pujari et al. suggest the tumors may arise from undifferentiated ectopic progenitor cells destined for the RPE that fail to complete fail to complete differentiation due to lack of necessary homeostatic factors leading to hyperplasia and accumulation within the neurosensory retina.[5]

There are no known risk factors. In terms of gender, in the study by Schachat et al males and females were equally affected (31 males and 29 females).[3] However, in the reports by Font et al and Shields et al most patients were male (70% and 68%, respectively).[6][4] Caucasian race appears to predominate.[3][4] The combined hamartomas of the retina and RPE has been most strongly associated with neurofibromatosis type II.[7][8][9][10] The diagnosis of neurofibromatosis should be especially considered in patients with bilateral combined hamartomas. There have also been case reports in the literature of association of combined hamartoma with neurofibromatosis type I,[11] Gorlin Goltz syndrome,[12] Poland anomaly,[13] branchio-oculo-facial syndrome,[14] brachio-oto-renal syndrome,[15] and juvenile nasopharyngeal angiofibroma.[16]

Recently, Dedania and colleagues[17] developed a classification system for these tumors which would guide the follow-up frequency determination. The classification scheme was based on the tumor's location (posterior, mid-periphery, or far periphery), characteristics (presence of traction, retinoschisis, or retinal detachment), and optical coherence tomography findings (epiretinal, partial retinal, or full-thickness retina/RPE involvement). Depending on the stages, the authors suggested management options ranging from complete ophthalmologic evaluation at least every 6 months to surgical intervention.

Given that a combined hamartoma, especially when there is a recorded growth of the lesion, can be mistaken for a melanoma or retinoblastoma, there are several reports in literature of enucleation performed due to a concern of a malignant process. Font et al reports 8 enucleations among patients with combined hamartoma in his review of 54 eyes from 1952 to 1988.[6] Histopathologically, the tumor is described as disorganized glial tissue intermixed with numerous blood vessels and cords and tubules of proliferating RPE.[6]

Hamartomas are benign, focal overgrowths of mature tissue elements normally found at that site, but which are growing in a disorganized manner. Combined hamartoma of retina and RPE is characterized by variable pigmentation, slight elevation, retinal vascular tortuosity, and epiretinal membrane (ERM) formation. They occur most commonly in a peripapillary location, but can also be found in the macula and periphery.

Combined hamartoma of the retina and retinal pigment epithelium is usually found in young children with symptoms of decreased visual acuity (VA) and strabismus. The patients commonly present with painless decrease in VA, strabismus, asymptomatic, or with nonspecific ocular irritation. Less common presenting symptoms include floaters, ocular pain, and leukocoria. The mean age of presentation differs between the studies from 1 year of age in Shields et al study to 15 years in Schachat et al study, possibly reflecting practice patterns. Patients with tumors involving the macula were found to be younger with strabismus and worse presenting VA. The percent of the correct referring diagnosis ranged from 3% to 31% depending on a study. The most common incorrect referring diagnoses include possible choroidal melanoma, choroidal nevus, retinoblastoma, toxocariassis, astrocytoma, and hemangioma.[3][4]

The presenting VA depends on the location of the lesion: macular, peripapillary, or peripheral. In Schachat et al the initial VA was 20/15–20/40 in 42%, 20/50–20/100 in 17%, and ≤ 20/200 in 42%. Shields et al found presenting VA ≤ 20/200 in 47% of all cases, in 69% of macular, and in 25% of extramacular tumors. The tumor usually presents as a unilateral solitary juxtapapillary, macular, or peripheral lesion; peripheral lesions are the least common. Bilateral cases have been reported. The tumor can be dusky brown, green, yellow, grey, or orange. Retinal vascular changes are prominent: the feeder and distal vessels are straight from traction and intrinsic vessels are tortuous and corkscrewed from contraction. The lesions are usually pigmented and elevated. The vitreoretinal interface changes, traction, fibrosis, gliosis, and ERM formation are common and foveal dragging is seen in 100% of macular tumors and in 42% of extramacular tumors. Less common presentations include mild retinal exudation, detachment, macular edema, choroidal neovascularization (CNV), retinoschisis, retinal holes, vitreous hemorrhage, and pre-retinal neovascularization.[3][4][18][19][20]

Clinical diagnosis of the combined hamartoma of retina and RPE depends on thorough history and review of the presenting signs, symptoms, and fundoscopic exam. In case of infants and young children the exam under anesthesia is warranted. A combined hamartoma should be excluded in all young patients with epiretinal membrane or vitreomacular adhesion.

The fluorescein angiography and OCT are of use in establishing the diagnosis of combined hamartoma of retina and RPE and also in its management. The fluorescein angiography shows early hypoflourescence due to blockage in the region of hyperpigmentation. In the arterial-venous phase, microaneurysms and a fine network of abnormal dilated capillaries with leakage may be observed. In the late phase, leakage from dilated tortuous vessels might be visible.[3][21] The peripheral lesions are characterized on fluorescein angiography by straightening of the vessels and relative avascularity. A report by Helbig et al discusses a case with significant areas of capillary nonperfusion that resulted in preretinal neovascularization peripheral to the hamartoma, suggesting that significant retinal ischemia can occur.[22] OCT is a helpful tool when evaluating the combined hamartoma of the retina and RPE as it allows one to visualize epiretinal membrane (ERM) commonly associated with the disease. The study by Shields et al examined 11 patients and showed that a distinct ERM with secondary retinal folds and striae was present in almost all patients. Horizontal traction induced by membrane was more common than vertical traction. The membrane was preretinal with no evidence of intertwining into the tumor, which has been previously hypothesized.[3] Arepalli and colleagues[15] from the Shields' Oncology have described 'mini-peaks' as saw tooth appearance of the inner retina without deep retinal disturbance (maxi-peaks).

Additional findings included retinal disorganization. However, the adjacent retina was normal in architecture and appeared to gradually thicken into the disorganized tissue.[23] At this point there are no studies assessing the progression of ERM formation as the patient ages. Ultrasonography might be performed to rule out other similar appearing pathology. There is usually a tumor with plaque-like configuration with no choroidal excavation or extrascleral extension. If neurofibromatosis type II is suspected, appropriate work-up is warranted.

There are no laboratory testing indicated for patients with combined hamartoma of retina and RPE.

Since combined hamartoma of retina and RPE presents at a young age, amblyopia prevention is paramount. Surgery for associated ERMs is still a subject of debate since visual acuity may not improve despite membrane removal Also, it may not be possible to remove the whole ERM without damaging the retina. There are case reports of treatment of complications and non-classic presentations of combined hamartoma such as CNV and vitreous hemorrhage.

The patients should be monitored for decrease in vision, CNV lesions, ERM formation, vitreous hemorrhage, and neovascularization.

Surgical intervention consisting of vitrectomy for ERM associated with combined hamartoma of the retina and RPE has been a subject of a debate. Out 60 patients reviewed by Schachat et al, three underwent surgery and only one improving in VA from 20/200 to 20/40.[3] In a study by McDonald et al two patients age 44 and 26 had no improvement.[25] Subsequently, there have been case reports of a 27-year-old patient improving from count fingers to 20/400, 20-year-old improving from 20/400 to 20/60, and a 10-year-old child improving from 2/200 to 20/40.[26][27][28] A study by Cohn et al looked at surgical outcomes for pediatric patients aged 1 to 14 years who underwent pars plana vitrectomy with membrane peeling with or without autologous plasmin enzyme.[29] The results showed that 8 of 11 showed improved VA postoperatively, and 3 of 11 showed stabilized vision. Four eyes had recurrences of ERM, and three of these eyes required additional surgery. They concluded that in the pediatric population, pars plana vitrectomy with membrane peeling with or without the use of autologous plasmin enzyme for ERM associated with combined hamartomas of the retina and RPE can result in improved retinal architecture and VA. There are also reports of surgical intervention for vitreous hemorrhage and subfoveal CVN membrane.[30][31]

ERM can recur after the surgery and sometimes additional surgery is necessary. It has been observed, however, that visual acuity may improve despite recurrence of the ERM.[29]

Complications of combined hamartoma of the retina and the RPE include reduced visual acuity due to amblyopia, formation of ERM, retinal holes, retinoschisis, CNV, retinal neovascularization, retinal heme, and retinal detachment.

Patients with combined hamartoma of the retina and the RPE can suffer from progressive visual loss due to tumor growth or complications associated with the tumor. In the study by Schachat et al, at 4 years, 66% had final VA within two lines of the original VA, 24% lost two or more lines, and 10% improved by two or more lines (with amblyopia therapy in 3 patients and vitreous surgery in 1).[3] Shields at a compared the macular versus extramacular tumors, and found that vision loss of ≥3 Snellen lines at 4 years was seen in 60% of eyes with macular tumors and 13% of those with extramacular tumors.[4]