Diffuse unilateral subacute neuroretinitis (DUSN) is a multifocal chorioretinitis caused by a nematode.

Several nematodes have been found to be etiologic agents of DUSN with Toxocara canis being the first to be described. Others include Baylisacaris procyonis (a parasite of raccoons and skunks, often found in the midwestern United States, it is a large nematode 1500 to 2000 μm), Ancylostoma caninum (a dog hookworm, found in the southeastern United States and Brazil, it is a small nematode 650 μm, or 400 -1000 μm),[1] Gnathostoma spinigerum (found in raw or undercooked fish and meat in India), Strongyloides stercoralis, and Brugia malayi. [2] [3] [4] [5] The trematode Alaria has been involved as well (found in undercooked frogs in Asian countries).[6]

Predisposing factors include travel to or residence in the United States (particularly the midwest and southeast), Canada, the Caribbean, Brazil, Venezuela, Senegal, India, China, Malaysia, Spain, Germany, and the United Kingdom, where causative parasites reside.[2][7] [8] DUSN occurs more frequently in children and young adults prior to the fourth decade, more often in males than females.

The nematode eggs are ingested after they have been shed from carriers such as dogs or raccoons. The nematode may also invade cutaneously. The nematode migrates hematogenously over the course of months and resides in the fundus for up to three years.[2][7][8][9] Infection results in an insidious, severe unilateral loss of peripheral and central vision due to retinal inflammation and degeneration. The retina, subretinal space, optic nerve, and choroid have been shown to manifest changes in DUSN.

The nematode and its waste products are thought to induce damage through toxic, inflammatory, and autoimmune mechanisms. It has been suggested that the outer retinal layer experiences a local toxic effect, whereas the inner retinal layer experiences a diffuse toxic reaction. Nematodes reside most often in the subretinal space, but they have also been located intraretinally. Lesions can disappear and then reappear in other areas of the retina, indicating the migratory path of the worm. Classically, DUSN occurs unilaterally, though, bilateral cases have been reported. [6][10] [11]

DUSN is classified in early and late stages, based on clinical features. Definitive diagnosis is made with the rare visualization of the nematode. Although the worm can be identified at any stage, there may be a greater likelihood of locating the nematode in the early stages of the disease. Typically the worms are very mobile and rapidly shift location.

Patients may report travel to humid and warm endemic areas, and/or exposure to animal carriers.

Overall, the most common features seen in early and late DUSN are subretinal tracks (91.7%), focal RPE changes (89.3%), and small white subretinal spots (80.2%). When the worm is able to be localized, it is most often in the posterior pole (43%), followed by the temporal retina (27%).[13] If the worm is visualized, it is often motile, slowly coiling and uncoiling. Depending on the species, the worm is 400 to 2000 micrometers in length, tapered at both ends, and glistening white in color.[11] 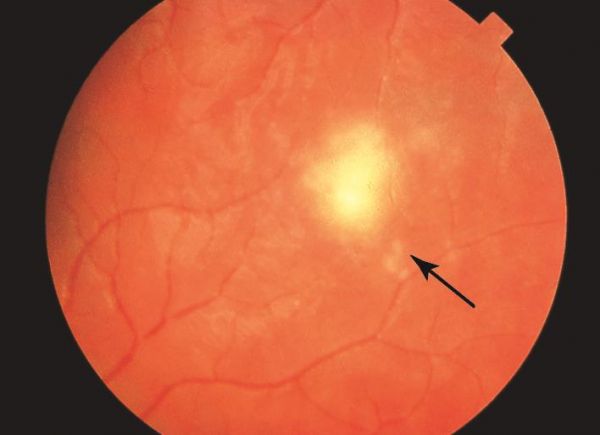 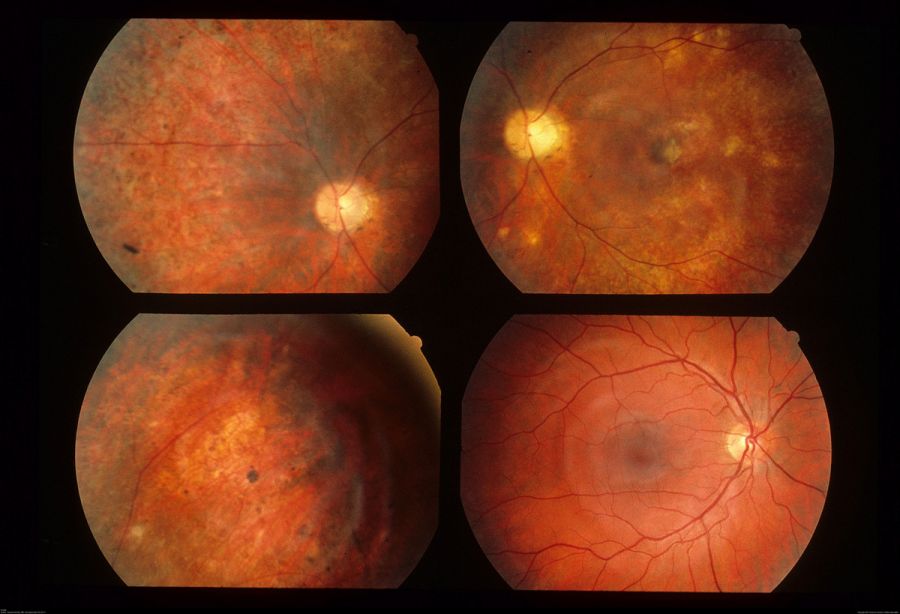 A nice video is available at http://aao-resources-enformehosting.s3.amazonaws.com/resources/AAO.LMS/BCSC_Media/BCSC1920/videos/BCSC2019_s09-v1101_diffuse-unilateral.mp4

Fundus examination: If the nematode can be seen, it is most often found in the macula near yellow-gray-white retinochoroidal lesions. In addition, optic nerve edema or atrophy, vascular narrowing, RPE changes, and vitritis may be noted.[8]

Electroretinography: Although the a:b ratio can be normal in the early stages, b-wave depression becomes proportional to retinal involvement.[8] Presumably, the inner retina is more profoundly affected than the outer retina.[15]

Electro-oculography: Reduced amplitudes are proportional to the degree of retinal damage, and can even become undetectable,[16] however about half of electro-oculographic exams are normal.

Ocular coherence tomography (OCT): Degeneration of the retinal nerve fiber layer (RNFL) and thinning of the macula are proportional to the degree of vision loss.[14][17] Of note, the RNFL may show an increase in thickness due to initial transitory edema. The inner retinal volume is significantly more affected than the outer retinal volume.[15] Loss of foveal depression and increased intraretinal hyperreflectivity in the shape of the worm can be seen as well.[17]

Scanning laser ophthalmoscopy: This modality can facilitate visualization of the nematode.

Serum eosinophilia may raise suspicion for the presence of a nematode.

Visualization of the worm is rare. When the nematode is seen, it tends to migrate away from light and from view. Therefore it is important to immediately treat a visible nematode with photocoagulation. When clinical features are present in the absence of a visible worm, pharmacologic management may be commenced.

Localization of the worm and subsequent photocoagulation is preferred, as elimination of the nematode halts vision loss and results in regression of inflammation. When visualization of the worm is not possible, all of the prime signs of early DUSN, as discussed above, should be present before antihelminitic drugs are initiated. Additionally, antihelmintic therapy may be useful adjunctively when laser treatment alone does not kill the worm.[19] [20] Oral corticosteroids may help decrease inflammatory responses in the eye as well.

Systemic therapy: Although thiabendazole has been used previously, albendazole dosed at 400 mg/day for 30 days has been studied more often and with successful results.[2][8] Although generally well tolerated, side effects of albendazole include gastrointestinal upset, dizziness, rash, and alopecia. Albendazole is not recommended for patients who are pregnant or breast-feeding due to its teratogenic effects.[21] Corticosteroid therapy: Prednisone 40-60 mg daily, followed by a taper over 2 to 4 weeks is acceptable.[20][21]

Changes in the retinal architecture corresponding to visual function can be monitored with imaging modalities such as the OCT. Perimetry can also monitor visual field.

Photocoagulation: The location of the worm is confirmed by high-magnification biomicroscopy and the use of fundus contact lenses. The worm is then confined by a laser boundary using contiguous 200-micrometer spots with a 532-nanometer laser at about 200 milliwatts (mW) with a duration of up to 0.2 seconds, followed by confluent treatment within the bounded area. Ideally, the burn is sufficiently intense so that shriveling of the worm is seen. Alternatively, a single laser shot aimed at the head of the worm may be used.[18] Since the nematode can be photophobic, for safer photocoagulation, the slit beam may be aimed adjacent to the worm to direct it away from important regions such as the macula.

Routinely monitor success and complications of the surgery post-operatively.

Areas of direct helminthic damage prior to therapy are often not reversible.[8] However, secondary inflammation following photocoagulation usually subsides after without sequelae.[18][24] [25] [26] [27] [28] Photocoagulation may be complicated by hemorrhage, vascular occlusion, choroidal neovascularization and epiretinal membrane formation.

Early detection and treatment stops vision loss, and complete resolution may be observed. In later stages, treatment is indicated to prevent additional vision loss. Failure to eliminate the nematode results in progressive chorioretinal destruction and severe, irreversible vision loss.[8]Visual acuity in late-stage DUSN does not improve by medical or surgical treatments.