Eight-and-a-half syndrome describes a constellation of symptoms that occur due a lesion involving the abducens (cranial nerve (CN) VI) nucleus, the fascicular portion of the facial (CN VII) nerve, and the medial longitudinal fasciculus (MLF). This results in a combination of horizontal gaze palsy, facial nerve palsy, and internuclear ophthalmoplegia (INO).

The abducens nucleus resides in the dorsal pons. Medial to the CN VI nucleus lies the MLF, a heavily myelinated nerve tract connecting the paramedian pontine reticular formation (PPRF) and CN VI to the oculomotor nucleus (CN III) on the contralateral side. The facial (CN VII) nucleus also lies nearby in the dorsal pons and the CN VII fascicle moves posteriorly to wrap around the abducens nucleus before exiting the pons. Lesions to the abducens nucleus result in ipsilateral horizontal gaze paresis. Lesions to the MLF result in an internuclear ophthalmoplegia (INO). 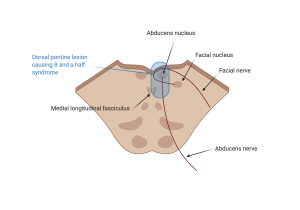 The condition is often caused by a lesion (vascular or demyelinating) in the dorsal tegmentum of the caudal pons. Blood supply to this area is derived from paramedian pontine arteries, which usually supply the corresponding side of the midline.[4] Individual case reports have also reported other causes including cavernomas[5] and neoplasms[6]

Eight-and-a-half syndrome is largely a clinical diagnosis, however brainstem magnetic resonance imaging (MRI) with and without contrast can provide suggestions regarding the underlying etiology. For example, a lesion that is hyperintense on diffusion weighted imaging (DWI) and hypointense on apparent diffusion coefficient (ADC) imaging may suggest a stroke. Other findings on MRI may be more suggestive of other etiologies, and lesions can sometimes be detected even if only a few millimeters in size.[4]

The overall prognosis is in part based on the underlying etiology. Generally, diplopia and facial palsy in cases of isolated eight-and-a-half syndrome has a good prognosis, with abduction weakness typically persisting longer than adduction weakness.[2]