Internuclear ophthalmoplegia (INO) is an ocular movement disorder that presents as inability to perform conjugate lateral gaze and ophthalmoplegia due to damage to the interneuron between two nuclei of cranial nerves (CN) VI and CN III (internuclear). This interneuron is called the medial longitudinal fasciculus (MLF). The MLF can be damaged by any lesion (e.g., demyelinating, ischemic, neoplastic, inflammatory) in the pons or midbrain. The MLF is supplied by branches of the basilar artery and ischemia in the vertebrobasilar system can produce an ischemic INO.[1]

The MLF is a heavily myelinated nerve tract connecting the oculomotor nucleus (CN III) of the ipsilateral side with the paramedian pontine reticular formation (PPRF) and CN VI of the contralateral pons. Thus, demyelinating lesions in the midbrain or pons often produce a unilateral or bilateral INO in young patients.

The INO is characterized clinically by an ipsilesional adduction deficit (partial or complete) with a contralateral, dissociated, horizontal abducting saccade on attempted gaze to the contralesional side. Hering’s law of equal innervation has been hypothesized as a possible explanation for the dissociated contralateral horizontal gaze evoked nystagmus in the abducting eye. Increased innervation to the underacting adducting muscle would result in an enhanced stimulus to the contralateral abducting muscle[2]

The INO can be unilateral or bilateral and may present with or without (neurologically isolated) other brainstem findings.

Wall-Eyed Bilateral Internuclear Ophthalmoplegia exists when there is bilateral damage to the MLF. This damage causes a primary position exotropia (eyes are looking at the opposite “wall.”, thus the possibly outdated term “wall eyed”). The most common etiology is infarction of the midbrain in older patients and demyelinating disease in young patients.[3] The exotropia is likely decompensation of fusional mechanisms and the XT is not present in every case of bilateral INO. See video: [1] WEMINO

This is a less common variant of INO, similar to the WEBINO above. As in WEBINO, patients with a unilateral MLF lesion (monocular INO) have a primary position XT.[4]

One and one half syndrome:

This syndrome occurs when there is a lesion to the MLF and the PPRF or CN VI nucleus on the same side resulting in an INO in one eye and an ipsilateral horizontal gaze palsy[5].

Eight and a Half Syndrome:

This syndrome is characterized by having one-and-a-half syndrome and a facial fascicular nerve (CN VII) palsy. The fascicle of CN VII wraps around the nucleus of CN VI in the dorsal pons. There is conjugate horizontal gaze palsy on looking to one side followed by INO on looking to the opposite side, along with unilateral facial weakness. The close proximity of the PPRF, facial nerve nucleus and MLF located in the dorsal pons makes this syndrome much more likely. The lesion is most often vascular or demyelinating in the dorsal tegmentum of the caudal pons[6].

Half and Half Syndrome:

A syndrome that consists of an INO in one eye combined with an ipsilateral CN VI fascicular involvement with sparing of the sixth nerve nucleus. Thus, there is “half” of a horizontal gaze palsy (INO) plus an additional “half” (abduction deficit from CN VI fascicular palsy).

This syndrome is a rare ophthalmoplegia, either bilateral or unilateral that exhibits contralateral adducting eye (rather than abducting eye) nystagmus with abduction restriction on physical exam. It is the reverse of the typical INO, and although the lesion localization is not consistent, it likely is due to CN VI pre-nuclear input asymmetry[7].

A lesion in the MLF interrupts the neural communication to the CN III subnuclei that allows for conjugate horizontal gaze arising from the final common pathway for horizontal gaze (CN VI nuclei). An INO is a common presentation of multiple sclerosis (MS) in younger patients. In older people, stroke is a more common etiology. Less common causes for an INO include traumatic, neoplastic, inflammatory (e.g., sarcoid, Behcet’s disease, lupus), or infectious (e,g., cryptococcosis, Borrelia burgdorferi (Lyme disease) etiologies.[8],[9],[3] INO is rare in children but may result from neoplasms (e.g., medulloblastomas or pontine gliomas) or similar etiologies to adults.[10] 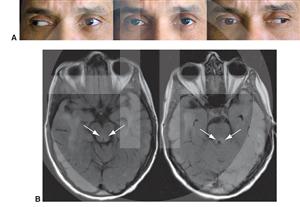 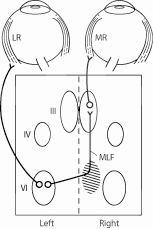 Typically, the paramedian pontine reticular formation (PPRF) receives information from the higher cortical centers such as the frontal eye fields, occipital and parietal lobes and the superior colliculus. From the PPRF the signal travels to the ipsilateral nucleus for the abducens nerve (CN VI). The abducens nucleus would then send an excitatory signal through the MLF to the contralateral medial rectus muscle (CN III). The activation of the contralateral medial rectus and ipsilateral lateral rectus muscle produces horizontal conjugate eye movement. The side of the INO is named by the side of the adduction deficit, which is ipsilateral to the MLF lesion. Because of the close proximity of the the MLF to the midline, bilateral involvement may not be uncommon (BINO).

Symptoms: Symptoms of INO of varying severity. Symptoms range from blurry vision, diplopia, or dizziness on lateral gaze. A good ocular examination is often all that is required to diagnose of INO

The diagnosis is made clinically with testing of the eye’s ability to perform conjugate movements. In one review of INO, some of the most common causes included: 1) Infarction - 38%- Unilateral INO in 87% of cases; 2) Multiple sclerosis in 34%-Unilateral in 27%; and 3) Unusual causes included trauma, tentorial herniation , infection , tumor , iatrogenic injury , hemorrhage, vasculitis.[11]

Imaging tests such as a CT scan or MRI brain (stroke protocol and with contrast for demyelination) are ordered after a diagnosis is made to discover where the damage is located so that the physician can then assess which route to take based on what is causing the damage. If the etiology is inflammation or infection, high dose corticosteroids can help. If the etiology is MS and not relapsing-remitting, then treatment becomes harder. In general MRI is superior to CT scan for evaluation of INO.

Dalfampridine, a potassium channel blocker prescribed for gait impairment was used in in a case series and the authors reported improvement in saccades and ocular motility in patients with INO secondary to demyelination in Multiple sclerosis. Improved neuronal conduction along MLF has been discussed as a possible explanation for this effect seen[12]

The prognosis of most patients with an INO is good but the final outcome depends in part on treatment of the underlying etiology. Ischemic and demyelinating INO typically recover. Patients with WEBINO or WEMINO may benefit from patching, prism, or strabismus surgery to correct any residual primary position symptomatic deviation (XT) that does not recover.[13]