The electroretinogram (ERG) is a diagnostic test that measures the electrical activity of the retina in response to a light stimulus. The ERG arises from currents generated directly by retinal neurons in combination with contributions from retinal glia. Importantly, the ERG is an objective measure of retinal function that can be recorded non-invasively under physiological conditions. ERGs are often recorded using a thin fiber electrode that is placed in contact with the cornea or an electrode that is embedded within a corneal contact lens. These electrodes permit the electrical activity generated by the retina to be recorded at the corneal surface. The ERG can be elicited by diffuse flashes or patterned stimuli. The International Society for Clinical Electrophysiology of Vision (ISCEV) has introduced standards for the different forms of ERG recordings. The ERG has important clinical utility, in that it provides diagnostic information concerning a variety of inherited and acquired retinal disorders. Moreover, the ERG can be used to monitor disease progression and evaluate retinal toxicity due to various drugs or retained intraocular foreign bodies.

The first known ERG was recorded from amphibian retina in 1865 by the Swedish physiologist Alarik Frithiof Holmgren. James Dewar of Scotland subsequently recorded the ERG in humans in 1877. In 1908, Einthoven and Jolly separated the ERG response into three components: a-wave, b-wave, and c-wave, which are further described below. Despite the early discovery of the ERG, widespread application did not occur until 1941, when American psychologist Lorin Riggs introduced a contact-lens electrode for ERG recording. Many of the observations that serve as the basis for our understanding of the ERG were conducted by Ragnar Granit, for which he won the Nobel Prize for Physiology and Medicine in 1967. Granit’s studies were primarily conducted on dark-adapted, rod-dominated cat retina. Using this model he was able to demonstrate the physiology underlying different ERG sources by altering the level of anesthesia and observing the loss of different ERG components. Modern pharmacological manipulations in various animal models have confirmed Granit’s findings and have extended our understanding of the cellular sources of the ERG.

Preparation of the patient

According to ISCEV 2015 full-field ERG guidelines:

Recording electrodes: in contact with cornea, bulbar conjunctiva, or skin below lower eyelid

The full-field ERG is a mass response of the retina that has contributions from several retinal sources, summed throughout the retina. This is useful in diseases that have widespread retinal dysfunction: e.g. rod/cone dystrophies, cancer associated retinopathy, and toxic retinopathies. Importantly, the ffERG is not useful for detecting small retinal lesions. The ffERG waveform components and their underlying sources depend on both the strength of the stimulus flash and the state of adaptation. That is, scotopic measurements that target rod-pathway function are made from the dark-adapted eye, whereas photopic measurement that target cone-pathway function are made from the light-adapted eye. A minimum set of responses that should be obtained has been defined by the International Society for Clinical Electrophysiology of Vision (ISCEV) in 1989, which were most recently updated in 2015. Examples of the minimum ISCEV-specified ffERG set of responses under dark- and light-adapted conditions are shown below (See Figure 1). 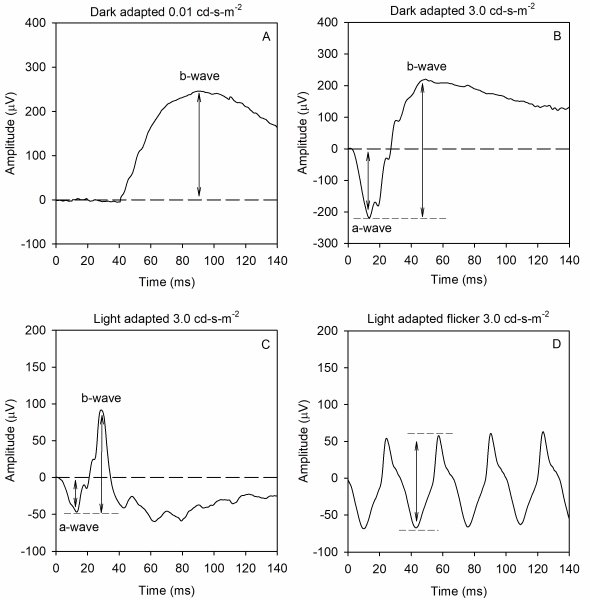 Panel C shows the ffERG recorded under light-adapted conditions in response to a strong flash presented against a light background. The intent of the light background is to suppress the rod response, allowing for assessment of the cone pathway. This stimulus elicits a negative a-wave and a positive b-wave, much like that shown in panel B. The amplitude and implicit times of the a- and b-waves are quantified in the same manner as that for the dark-adapted responses shown in panel B. Given that this response is recorded under photopic conditions, the a-wave is generated by cone photoreceptors, with additional contributions from OFF-type bipolar cells. The b-wave is generated by a combination of ON- and OFF-type bipolar cells.

Photopic negative response (PhNR): The PhNR is a slow negative potential that follows the b-wave recorded under light adapted conditions (panel C, above). The PhNR has gained interest because it is primarily driven by retinal ganglion cells. Thus, it is one of the few ffERG components that provides insight into retinal ganglion cell function. The most effective measure of the PhNR and the optimal recording conditions are debated, but it is often measured from the pre-stimulus baseline to the trough of the response, or at a fixed time following the stimulus flash. In 2018, ISCEV published guidelines for measuring and reporting the PhNR.

c-wave: The c-wave is a slow positive component that follows the b-wave and is generated from the retinal pigment epithelium and photoreceptors. Conventional ISCEV recordings do not provide assessment of the c-wave.

d-wave: The d-wave is a rapid positive potential that follows light offset and is generated by OFF-type bipolar cells. Conventional ISCEV recordings do not provide assessment of the d-wave.

Reporting ffERG according to ISCEV standards

Other Types of ERG Measurement

The focal ERG (fERG) is used primarily to measure the functional integrity of the central macula and is therefore useful in providing information in diseases limited to the macula. At present, this technique is not in common use, in part due to a lack of commercially-available instruments. In addition, the multifocal ERG (discussed below) can be used to assess macular function. The electrode types and placement discussed for the ffERG can also be applied for fERG measurement. A variety of approaches have been described in the literature for recording fERGs. Differing field sizes varying from 3 degrees to 18 degrees and stimulus temporal frequencies have been used in the various methods. However, each technique must address the challenge of limiting amount of light scattered outside the focal test area. fERG is useful for assessing macular function in conditions such as age-related macular degeneration, however good fixation from the subject is required.

The multifocal ERG (mfERG) assesses many local ERG responses, typically 61 or 103, within the central 30 degrees. This provides important spatial information that is lacking in the ffERG, allowing dysfunction within the macula that might be missed by ffERG to be assessed. mfERG responses are recorded under light-adapted conditions from the cone-pathway. It is important to note that mfERG is not a replacement for the ffERG: if pan-retinal damage or rod pathway dysfunction is suspected, then the ffERG should also be performed. The mfERG is becoming more commonly used for both research and clinical purposes, and ISCEV provided the first standards for mfERG in 2007 (updated in 2011).

Clarity of the ocular media and proper refraction are important for mfERG measurement. Electrodes and their placement can be the same as those described for the ffERG. A scaled hexagonal pattern, like that shown below, is commonly used to elicit the mfERG. Each of the hexagons in the stimulus has a 50% chance of being illuminated at a given time. Although random in appearance, the same on/off sequence is used for each hexagon (an “m-sequence”). This permits a response to be recovered for each stimulus hexagon. The resulting mfERG waveforms (shown below) are similar in shape to those of the light-adapted ffERG: there is an initial negative deflection (termed N1), followed by a positive deflection (termed P1), and a second negative deflection (termed N2). Research indicates that N1 has generators similar to those of the a-wave of the light-adapted ffERG, whereas the P1 and N2 have generators that are similar to the light-adapted b-wave and OPs. However, the manner in which the mfERG is elicited and processed differs considerably from the ffERG; as such, the mfERG response is not necessarily a miniature ffERG.

This approach produces a wealth of information and there are several ways in which the information can be condensed for display. Example mfERG responses from a normal eye are shown below. The same mfERG data are displayed in three different ways. The array of traces in the top row show the mfERG response obtained from each hexagon. The middle panel of traces shows ‘ring averages.’ These are average mfERG traces within rings of different eccentricity. The red trace, for example, is the mfERG response obtained from the fovea, whereas the orange trace is the average of the ring of hexagons immediately surrounding the fovea. The other traces represent averages of rings of increasing eccentricity, as shown in the schematic to the right. Often, the ratio of amplitudes within rings is compared (i.e. the “ring ratios”). The lower image is a three-dimensional mfERG amplitude plot. This topography plot shows the largest amplitude at the fovea, with a generally uniform decline in amplitude moving towards more eccentric locations. Another useful approach to visualizing the data is to plot the standard deviation of the amplitude (or implicit time) relative to visually-normal controls within each hexagon. Thus, there are a number of ways in which the responses can be summarized for display; the optimal visualization is guided by the question that is being pursued. 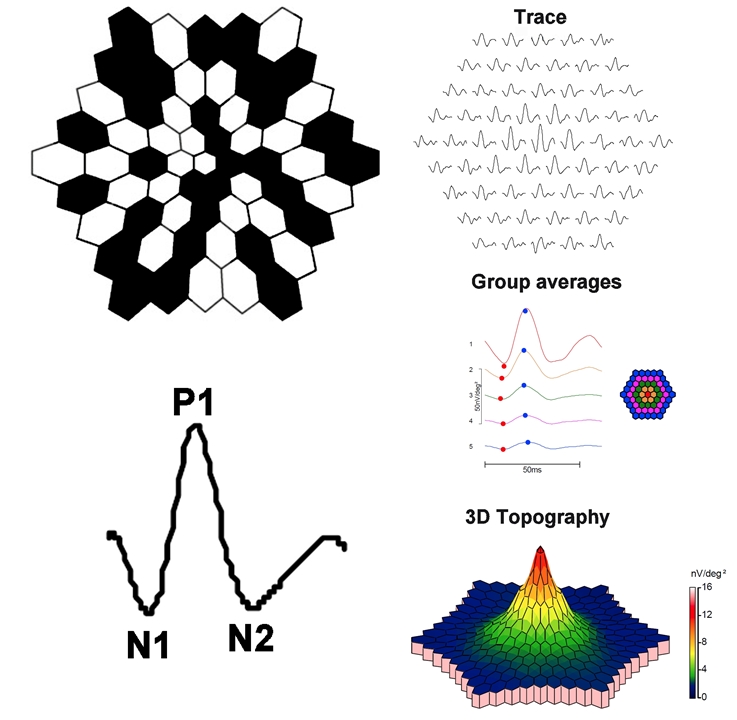 Given that mfERGs are useful for detecting localized abnormalities within the macula, a common application has been in assessing retinal dysfunction in hydroxychloroquine toxicity. The mfERG abnormality observed in these patients is often a decrease in the second ring amplitude, relative to the central ring. The mfERG has also been recorded in conditions such as retinitis pigmentosa, branch retinal artery occlusion, and Stargardt disease.

The pattern ERG (pERG) uses contrast reversing pattern stimuli (sinewave gratings or checkerboards) to assess macular retinal ganglion cell (RGC) activity. Electrodes and their placement may be the same as those described for the ffERG. However, contact lens electrodes are often avoided to maintain optimal optical quality of the stimulus. Clarity of the ocular media and proper refraction are important for pERG measurement. The pERG is typically recorded with natural pupils. ISCEV has provided a standard for recording the pERG that has most recently been updated in 2012. An example of a common pERG stimulus is shown below (See Figure 3, left). Over time, the dark checks become light, and the light checks become dark (typically at a rate of 4 reversals per second). It is important that there is no net change in luminance during the dark-to-light transition of the checks (i.e. the average luminance of the screen must be constant over time), or a luminance artifact will be introduced into the response.

Given that the pERG responses have relatively small amplitude, many repetitions are obtained in clinical practice. The trace below (See Figure 3, right) shows the pERG from a visually-normal individual (average of 150 responses). The pERG waveform consists of a small negative deflection near 35 ms, termed the N35 component, a positive deflection near 50 ms, termed the P50 component, and a negative deflection near 95 ms, termed the N95 component. The amplitude and implicit time of each of these components can be measured. Of note, this waveform is characteristic of the “transient pERG” obtained with a stimulus that reverses 4 times per second, so that the response is essentially complete before the next contrast reversal begins. For higher reversal rates (e.g. 16 reversals per second) a “steady-state” pERG is produced, which has different characteristics.

The N95 component is markedly reduced or eliminated in experimental glaucoma or by blocking action potentials using tetrodotoxin. Thus, the N95 component is likely generated by action potentials from RGCs. The source of the P50 is debated, but there is some evidence suggesting that it is generated by RGCs with additional contributions from more distal sites. The P50 and N95 components are dependent on macular cone function, as the photoreceptors provide input into the RGCs. Macular cone dysfunction can reduce the amplitude of the P50 and delay the response. Selective reduction of the N95 amplitude, with preservation of the P50 component, suggests RGC dysfunction. The pERG can be useful for assessing RGC function in conditions such as glaucoma and ischemic optic neuropathy. The pERG has also been shown to be abnormal in diabetic retinopathy and idiopathic intracranial hypertension.