Embryology of the Eye and Ocular Adnexa 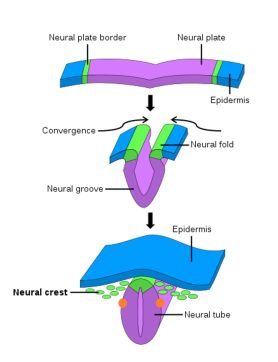 The development of ocular structures, like embryogenesis as a whole, can be best thought of as a series of cascading cellular events governed by a fairly limited set of molecular signals that turn on and off genetic programs. Remarkably, several of these signals have been conserved and recycled throughout evolution and remain essential to the development of all living organisms. Our goal here is to give an general overview of the embryologic concepts pertinent to the field of ophthalmology.

The first embryologic event pertinent to ocular development is gastrulation, the process by which the single-layered blastocyst transforms into the trilaminar disc, an area of tissue comprised of all three germ layers (ectoderm, mesoderm, and endoderm).

Shortly after the completion of gastrulation, the neural plate (purple) becomes genetically distinguishable as being neuroectoderm (Figure 1). The neural plate then undergoes neurulation, whereby it invaginates and its opposing edges fuse, forming the neural tube. The optic primordia (orange dots) first appear on the neural tube proximal to the future forebrain. The optic primordia give rise to the optic vesicle (Figures 2 and 3). As the optic vesicle extends outward toward the surface ectoderm, the proximal portion of the vesicle constricts forming the optic stalk (the future optic nerve) and the distal portion invaginates to form the optic cup (the future retina, iris, and ciliary body).

During the fifth week of gestation, the eyelids begin to form from contributions of both neural crest-infiltrated mesenchyme and nearby surface ectoderm. By week seven, two distinct eyelid folds are apparent, and epithelial cells begin to invaginate in the area of the medial lid margins, forming the precursors to the future lacrimal puncta and canaliculi.[1] During week eight, the upper and lower lids proceed to refuse via epithelial cell migration and proliferation.[2] Later, mesenchyme begins to infiltrate the lids to and begin to form the palpebral musculature. In the mid-second trimester, a gradual re-separation of the lids commences, forming the mature palpebral fissure.[3]

The lacrimal gland begins its development in the seventh week of gestation. Each gland is derived from a set of 15-20 neural crest-derived glandular buds at the superolateral angle of the conjunctival sac.[4] Notably, while the lacrimal gland develops acini and the lacrimal ducts canalized while still in-utero, in a significant minority of infants, reflex tear production does not begin until weeks 1-3 of life.[5]

Lens formation begins when the optic vesicle induces inward invagination and budding of the overlying surface ectoderm to form the lens vesicle (Figure 3).[6] Lens development obtains nutrition via derivatives of the hyaloid artery. Later, after hyaloid artery regression, lens nourishment is supplied via the aqueous humor.

The mature cornea is composed of three layers (epithelium, stroma, and endothelium). Each layer has distinct embryologic origins. The corneal epithelium is a derivative of surface ectoderm proximal to the developing lens (Figure 3). The corneal stroma and endothelium, along with a litany of other structures of the anterior segment, are derived from successive waves of invading neural crest cells. [7] The mature, transparent cornea is ultimately formed when the mesenchymal-derived stromal keratocytes produce a highly organized stromal collagen matrix. 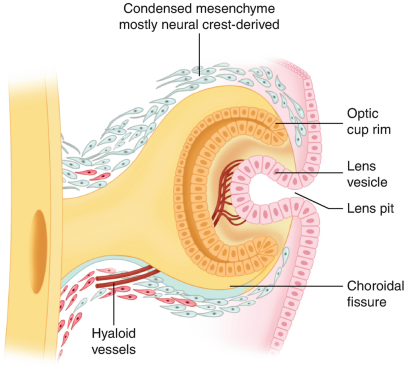 The iris and ciliary body are a product of the anterior rim of the optic cup (Figure 5). The inner and outer layers of the anterior rim, induced by surrounding mesenchymal development, give rise to the posterior and anterior portions of iris epithelium respectively.[8] The intrinsic muscles of the iris (sphincter pupillae and dilator pupillae) are derived from the surrounding neuroectoderm, whereas the ciliary muscle, the structure eventually responsible for changing the shape of the mature lens, is derived from invading neural crest cells.[9] Neural crest cells also produce the stroma of the iris, which, based on its eventual concentration of melanocytes, is the largest determinant of the mature iris color. 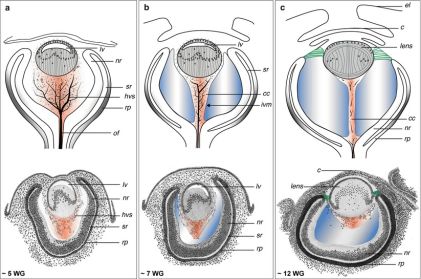 As previously mentioned, the optic cup rim (anterior 1/5 of the optic cup) is the precursor to the iris and ciliary body. The remaining 4/5ths of the optic cup ultimately gives rise to the retina. This inner 4/5ths, which is termed the optic cup body, is composed of two layers, each with distinct structural destinies. The thinner, outer layer becomes the retinal pigmented epithelium (RPE), while the thicker, inner layer is what forms the neural retina.[6] Of note, the RPE is the only pigmented tissue in the body not derived from neural crest cells (is instead a derivative of neural ectoderm). 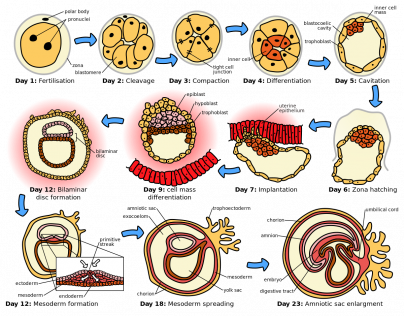 The choroid and sclera are formed when mesenchyme proximal to the optic cup condenses into two layers, an inner vascular layer (future choroid), and an outer fibrous layer(future sclera).

The formation of the extraocular muscles (EOMs) is the result of three distinct developmental epicenters in the embryonic cranium (preotic myotomes). Starting very early in development, each myotome has an associated cranial nerve (CNs III, IV, and VI) and these nerves associations persist into maturing, providing innervation to the respective mature EOM(s).

The structures of the bony orbit are primary a product of neural crest linage, along with a few minor contributions from mesoderm and ectoderm.[12] The orbit starts off as a loose network of undifferentiated mesenchymal cells and begin to ossify in the sixth gestational week.[13] The bones of the orbit develop by direct intramembranous ossification, with the exception of the sphenoid and the ethmoid bones which develops via endochondral ossification (characterized by a preceding cartilaginous phase).[14] 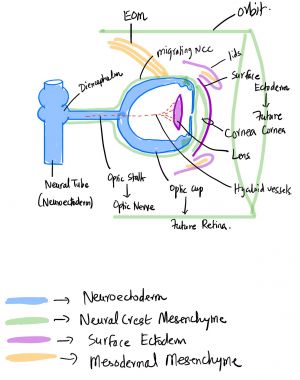 All images were obtained via a creative common license or direct approval from the original creator.