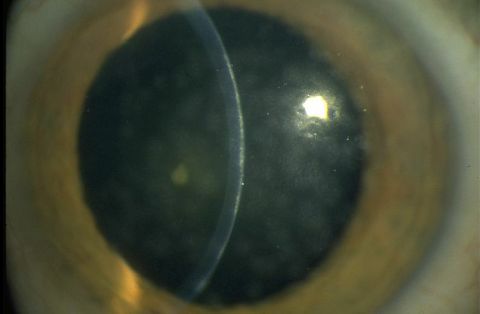 Epidemic keratoconjunctivitis (EKC) is a highly contagious viral conjunctivitis. [2] [3] It is caused by a group of viruses known as adenoviruses that in addition to infections of the ocular surface, are responsible for causing infectious diseases of the gastrointestinal tract and respiratory system illnesses such as the common cold virus, for example. [4] [5] [6] The adenovirus serotypes 8, 19, and 37 are often associated with EKC. [5][6]

The development of corneal inflammation, keratitis, distinguishes epidemic keratoconjunctivitis from other forms of conjunctivitis and usually arises after the fourth day after the initial onset of symptoms. [7] This can progress to focal epithelial keratitis and the resulting lesions can last for up to two weeks. After this time period, subepithelial infiltrates (which are thought to be related to the immune response) can form beneath the lesions. These can persist for years and may cause a reduction in visual acuity. [3][9] [10]

Epidemic keratoconjunctivitis can also develop membranous or pseudomembranous conjunctivitis in the more severe cases and cause scarring of the conjunctiva and symblepharon formation, where the eyelid adheres to the cornea. [3][11] 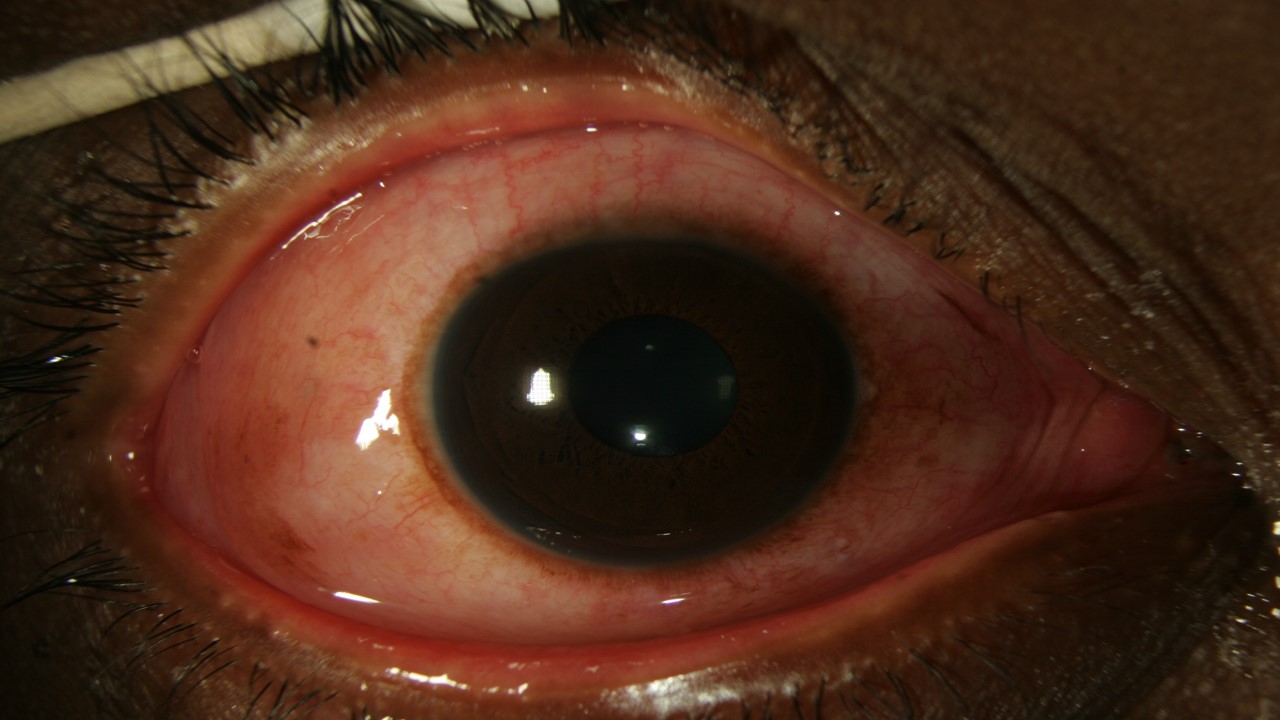 Figure 1: Epiphora, chemosis and diffuse erythema of the bulbar conjunctiva in a patient with EKC; Clinical photograph captured courtesy of the UNC Ophthalmic Imaging Department. 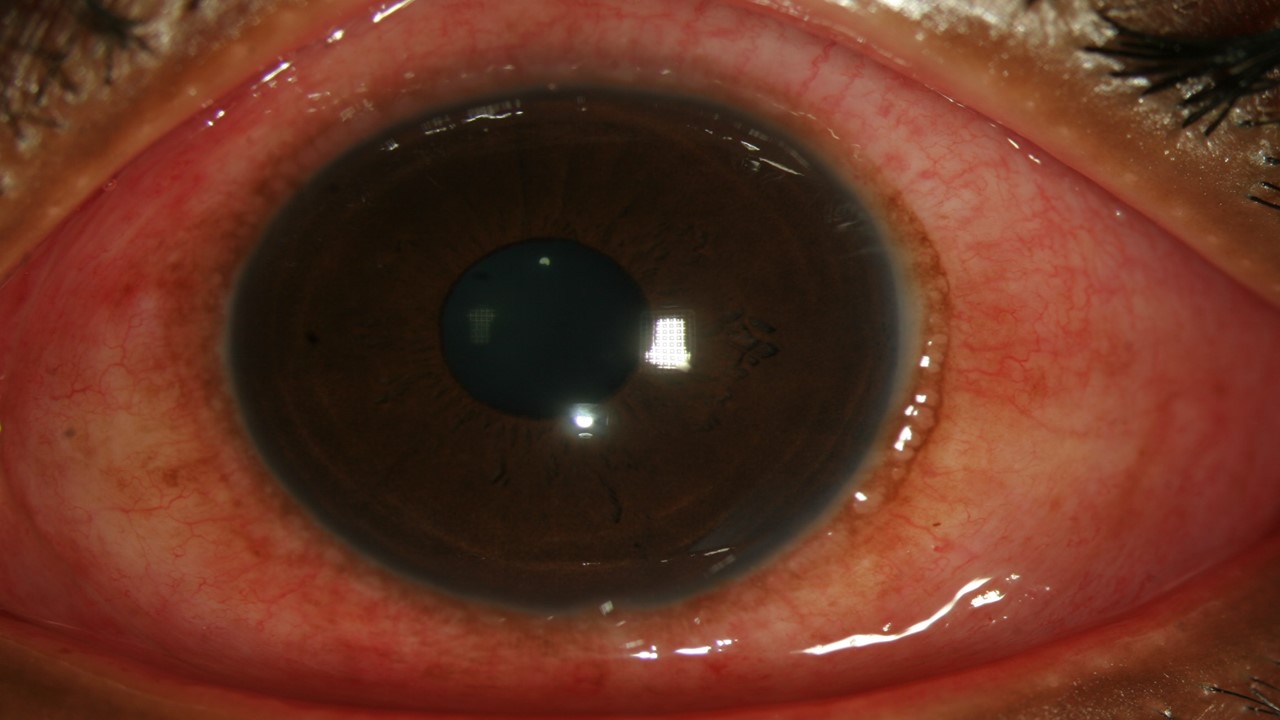 Figure 2: Epiphora, chemosis and diffuse erythema of the bulbar conjunctiva in a patient with EKC, shown under higher magnification; Clinical photograph captured courtesy of the UNC Ophthalmic Imaging Department. 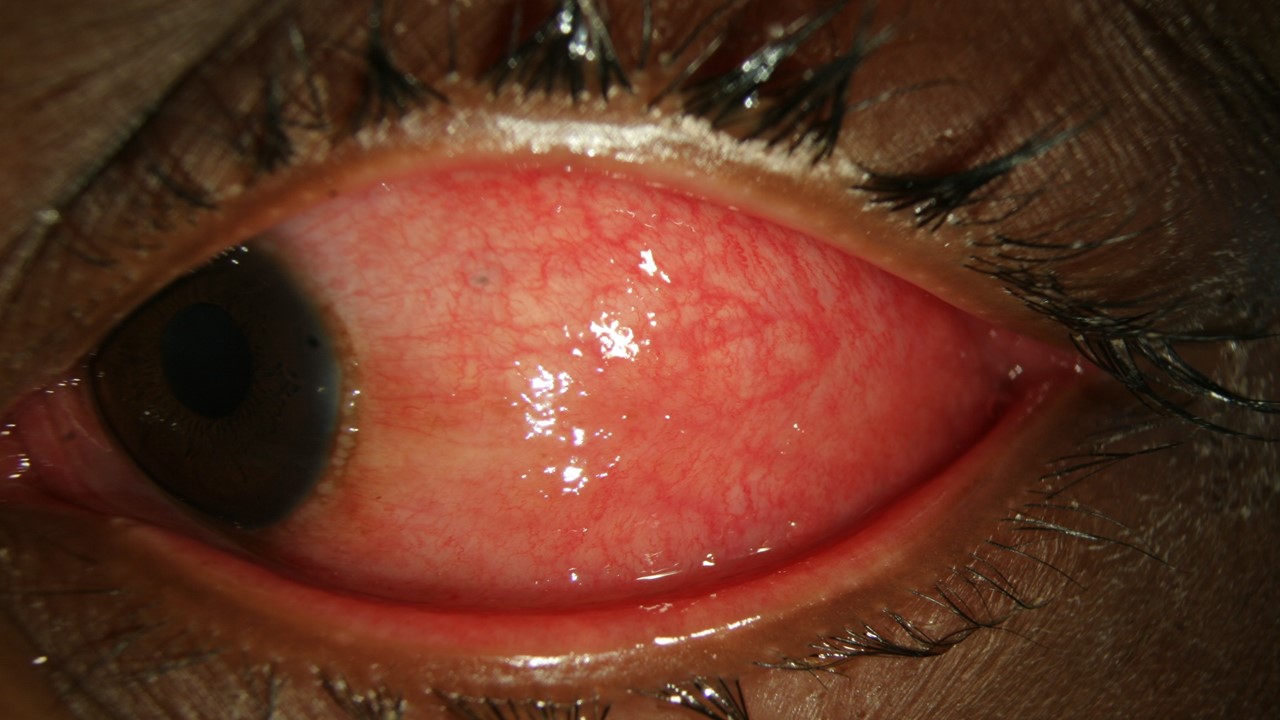 Figure 3: Erythema and chemosis of the bulbar conjunctiva in a patient with EKC, view of temporal portion of conjunctiva as patients looks nasally; Clinical photograph captured courtesy of the UNC Ophthalmic Imaging Department. 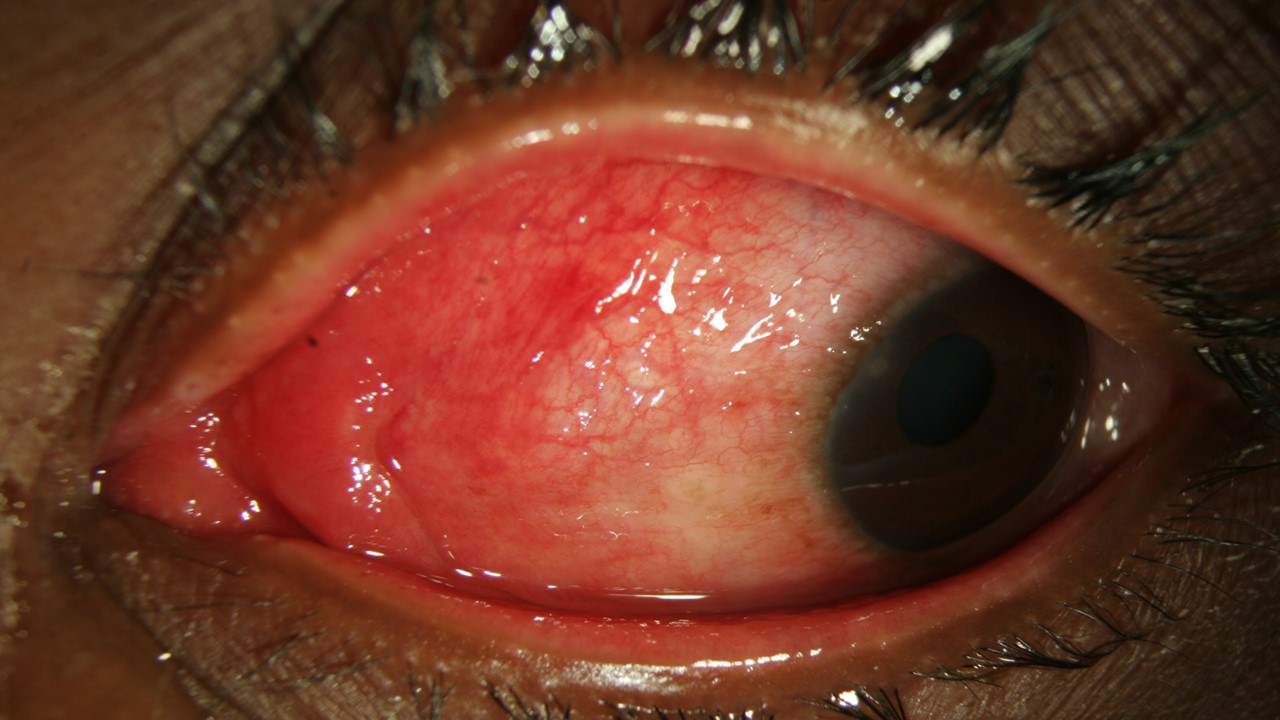 Figure 4: Erythema and chemosis of the bulbar conjunctiva in a patient with EKC, view of nasal portion of conjunctiva as patients looks temporally; Clinical photograph captured courtesy of the UNC Ophthalmic Imaging Department. 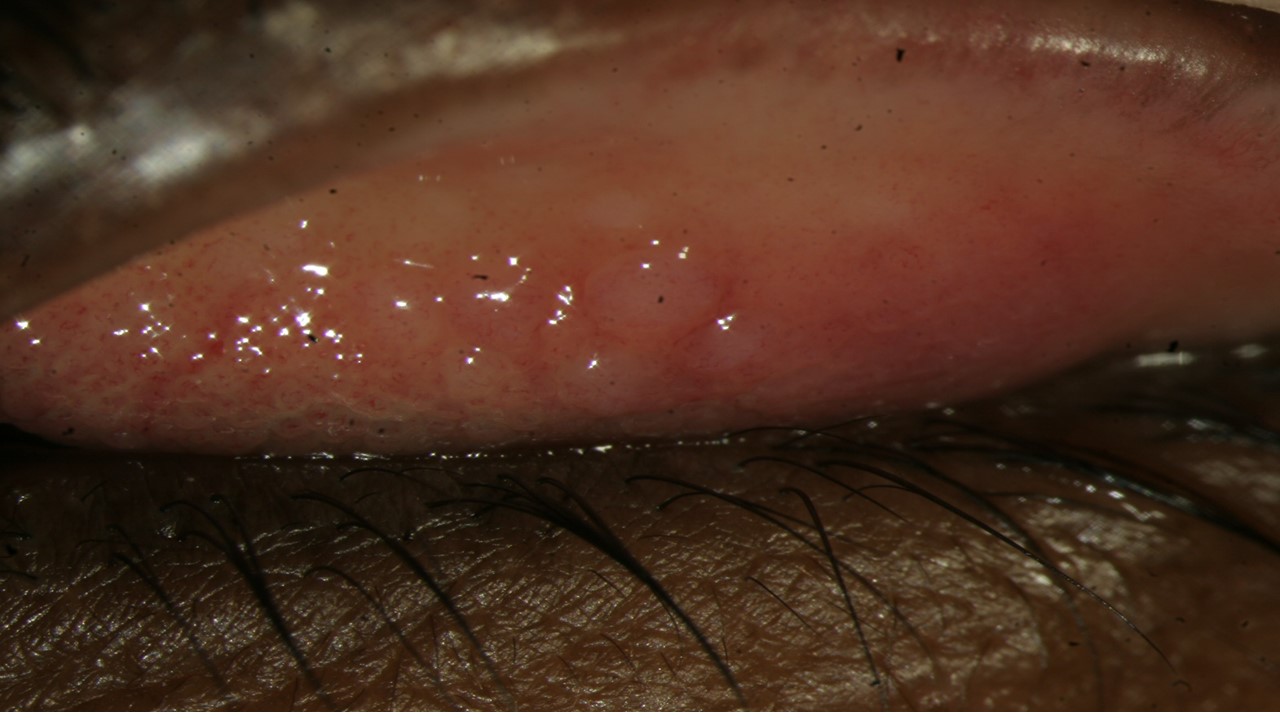 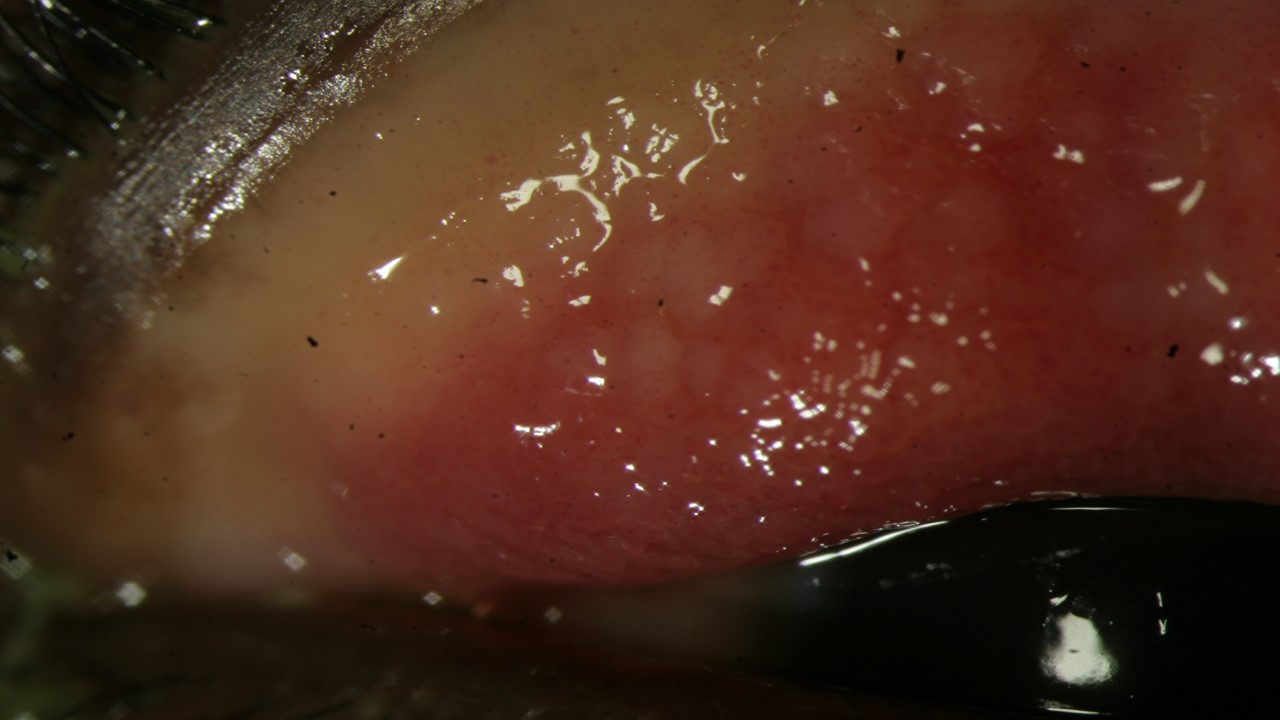 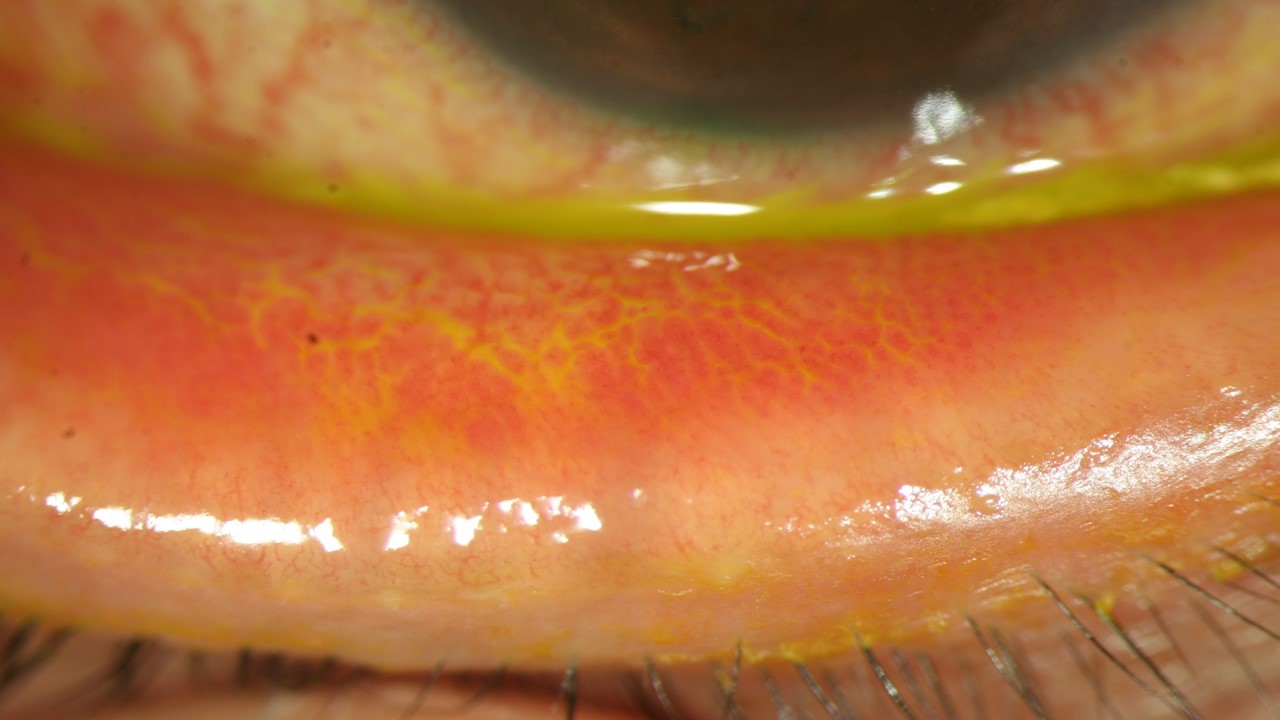 Figure 7: Erythema of the palpebral conjunctiva in a patient with EKC, view with lower eyelid everted; Clinical photograph captured courtesy of the UNC Ophthalmic Imaging Department. 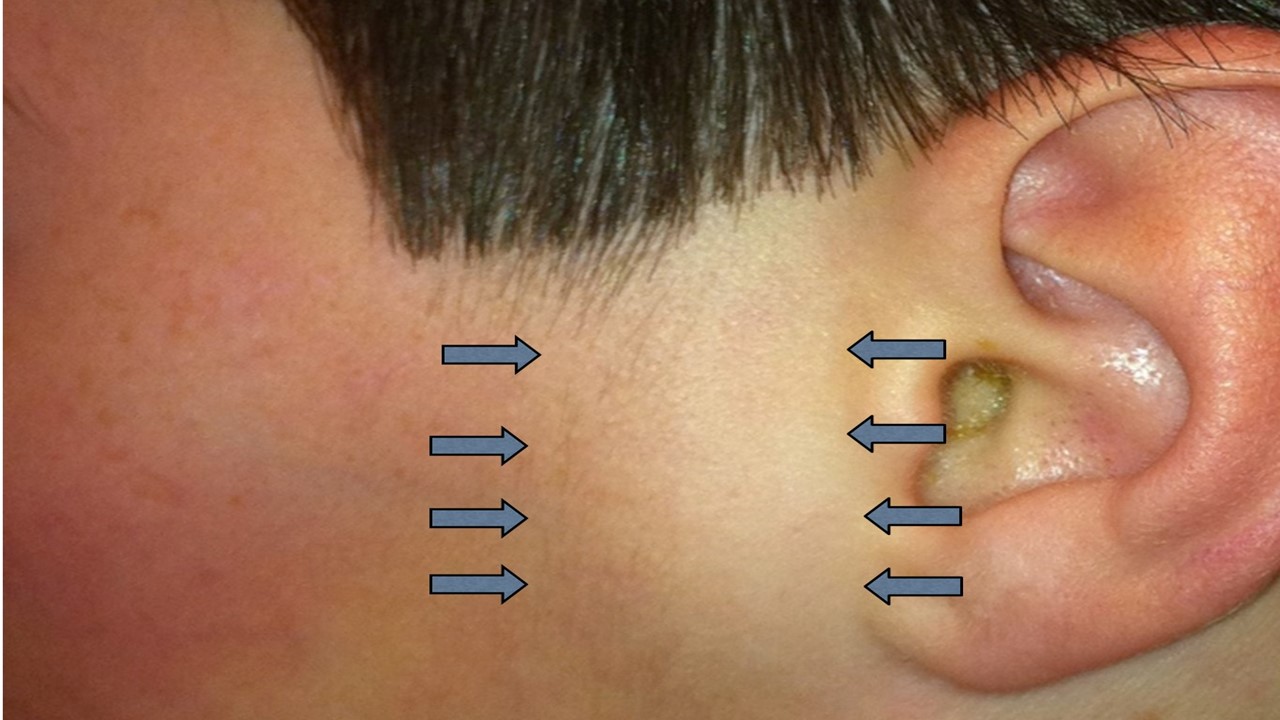 Of the testing methods available, the most commonly used are cell culture and immune assays. Polymerase chain reaction (PCR) is another method that has been shown to be more accurate than cell culture and immunoassay combination. These diagnostic methods are however expensive and not readily available to most outpatient settings. [9]

In Office Point of Care Testing

The RPS Adeno Detector (Rapid Pathogen Screening, AD1) was FDA approved in 2006 as a point-of-care antigen-based immunoassay for diagnosing adenovirus infections [13].  The AdenoPlus is the enhanced second-generation device by RPS and was FDA approved in 2012 and delivers a result in 10 minutes. The AdenoPlus uses direct sampling of tears and micro-filtration technology to improve sensitivity.  In 2013, Sambursky et al [14] published the results of a prospective, sequential, masked, multi center clinical trial of 128 patients with clinically diagnosed adenoviral conjunctivitis to compare the sensitivity and specificity of the AdenoPlus with CC-IFA and PCR.  The study demonstrated that the AdenoPlus had a sensitivity and specificity of 90% and 96%, respectively compared to CC-IFA, and of 85% and 98%, respectively, compared to PCR. The sensitivity and specificity were 93% and 98%, respectively, compared with both CC-IFA and PCR.

In 2015, Kam et al [15] also reported a high specificity with AdenoPlus but a much lower sensitivity than had been previously published (39.5% versus PCR). The authors concluded that PCR is a more sensitive test and, therefore, the use of the AdenoPlus should be limited to diagnostically challenging cases.

Advantages of in office testing for adenovirus

Given the highly contagious nature of adenoviral conjunctivitis, a delay in diagnosis can lead to unnecessary isolation or empiric antibacterial or antiviral therapy [12]. As the AdenoPlus detects the presence of viral particles, the results may correlate with disease infectivity and, thus, allow patients a speedier return to school and work when the virus is no longer detectable. In a cost-effectiveness study, utilization of the RPS Adeno Detector was shown to save $429.4 million and avoid 1.1 million cases of inappropriate antibiotic use .[16]

Epidemic keratoconjunctivitis usually resolves on its own and there is no effective treatment. Antiviral medications have not been shown to be effective against viral conjunctivitis, especially the adenoviruses responsible for epidemic keratoconjunctivitis. [8][9][12]Topical corticosteroids are often prescribed in severe cases and while they do assist in reducing symptoms related to inflammation they do not have any significant impact on speeding up recovery time. [9]Some studies have in fact shown that the use of corticosteroids may in fact increase the duration of disease by inhibiting removal of the adenovirus by the immune system and improving the replication of the virus. [8][9]

Other methods focus on providing relief from symptoms. These include cold compresses, artificial tears, and topical cycloplegic medications to alleviate significant complaints of photophobia. [3] [21][9][12]

Epidemic keratoconjunctivitis is a highly contagious disease and given that no effective treatment yet exists, prevention is the best method to tackle the disease. The virus can be spread by contact with infected surfaces or objects. A patient can spread the disease by touching or rubbing their eyes and then touching another object. Objects that come into contact with the eyes (such as cosmetics) should not be shared or allowed into contact with others. [9] A person can be contagious for two weeks or more after first showing symptoms and this should be taken into consideration when deciding whether or not to return to work or school. [9]

The physician's office or hospital setting is often the point of origin for many EKC outbreaks and prevention measures should be exercised thoroughly in these locations. These include steps such as using disposable instruments and tools, employing gloves, and using disposable covers for instruments that cannot be disposed of routinely. [9] Guidelines on how to clean instruments (such as tonometers) do vary. Studies have shown differing effectiveness in cleaning agents such as hydrogen peroxide and isopropyl alcohol in their ability to eliminate adenovirus. It has been suggested that the instrument manufacturer’s cleaning protocols should be followed given the lack of universal guidelines. [9]