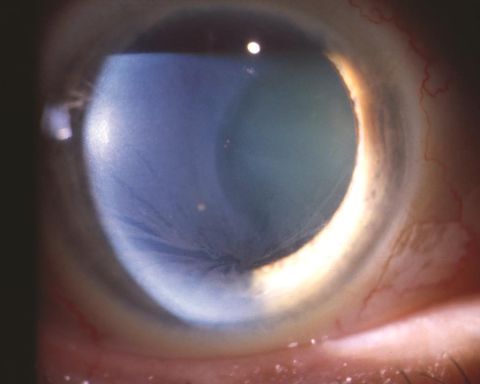 Corneal manifestations can include hyperreflective intracellular inclusions at the level of the basal epithelial cells or epithelial basement membrane. This can include the involvement of Bowman layer, causing a distorted and uneven appearance. Some studies have suggested the manifestations may be different for females affected, in which the inclusions were finer and more diffuse.[4] The central and peripheral cornea appear to be affected similarly. The opacities appear in a vortex-like pattern, which results from the centripetal migration of deposit-laden limbal stem cells as the corneal epithelium undergoes natural growth and repair.

Conjunctival disease: Unlike the cornea involvement, male and female patients do not differ in terms of conjunctival involvement. Intracellular inclusions that are round in shape have been observed. Additionally, vascular abnormalities include vessel tortuosity, microaneurysms, and general dilation. The vessel abnormalities have been postulated to be due to the abnormal storage of globotriaosylceramide in the vascular endothelium causing breakdown and weakening of the vessel walls.[3][5]

Non-ocular manifestations of Fabry disease are neuropathic pain, dermatologic manifestations such as telangiectasias and angiokeratomas, renal failure, strokes, and deafness. Neuropathic pain is a common association, with typical onset in childhood. Patients frequently do not live beyond the fourth or fifth decade of life.

The genes involved in Fabry disease is present on the X chromosome. A study done in Missouri found a mutation rate of one in 2,913 newborns. Not all of these newborns developed Fabry disease, suggesting that there are pathologic and non-pathologic variants.

The only known risk factor for Fabry disease is a positive family history. There have not been environmental risk factors proposed.

Fabry disease is characterized by accumulation of globotriaosylceramide in tissue and this is evident on microscopy. It appears as an osmiophilic substance when dyed with toluidine blue and can also be stained using hematoxylin and eosin.[2] Stains that are more specific for sphingolipid include Luxol fast blue, Oil red O, and Sudan black. Finally, lectins can be used to stain for α- and β-galactosyl residues.[6]

Fabry disease is an inherited lack of enzyme production. As such, it cannot currently be prevented. Complications of the disease and progression can be mitigated using enzyme replacement therapy.

Patients will typically present in the first or second decades of life with neuropathic pain. This pain can be in the extremities, abdomen, joints, or chest. The pain description is variable, but often said to be burning in quality. The pain can be chronic or occur in acute attacks. It is exacerbated by conditions causing stress to the body including temperature changes, exercise, alcohol, or fevers.[7] Other symptoms begin later and can include angiokeratomas, heat intolerance, tinnitus, GI symptoms, renal and cardiac dysfunction, TIA/stroke, shortness of breath, and fatigue.

Diagnosis of Fabry disease often begins after symptoms have been present for long enough to cause the patient enough discomfort to be seen by a healthcare provider. Many patients are initially misdiagnosed, as the disease can present in a multitude of patterns. A personal history of the symptoms of Fabry disease combined with a family history of early cardiac or renal failure in the setting of similar symptoms is suggestive.

Biopsy is not required nor is it typically used for diagnosis. However, if the diagnosis is in question, it can be helpful. Specific renal manifestations of Fabry disease can be observed on electron microscopy with the appearance of enlarged secondary lysosomes with lamellated membrane structures. The lamellated appearance has been said to be more diagnostic, but can also be present in patients on amiodarone or chloroquine.[6] Other tissues biopsied will show electron-dense lysosomes in various tissues including blood vessels, eccrine glands, and fibroblasts.[8]

The physician may order an enzyme assay to assess the amount of α-galactoside A activity. A low level of activity (<1%) is often found in males and homozygous females. This test has been adopted by some states into routine newborn screenings. A positive enzyme assay test is considered diagnostic.

The mainstay of treatment is symptomatic relief. This involves various strategies, including management of respiratory or GI symptoms, management of pain, and protection from advancement of untreated disease.

Enzyme replacement therapy: ERT is considered first line treatment for Fabry disease. Two forms of the enzyme are currently produced (Agalsidase alfa and Migalastat hydrochloride). ERT has been shown to be safe and effective in reducing levels of pain, increasing sweat production, and reducing GI symptoms.[9] [10] ERT is costly to maintain, requiring up to $350,000 dollars per year per patient as recently as 2012.[11] The effect of ERT on ocular findings is less clear, although corneal deposits have been shown to regress in some cases. There is significant difficulty in quantifying the degree of remission as there is currently no standardized way to measure the corneal opacities.[12]

Pain management: Pain should be managed as appropriate for each individual patient. Care should be taken to avoid opiates given the high likelihood of lifetime use and addiction potential. Multimodal pain relief should be pursued whenever possible.

Kidney Transplant: For those patients who develop ESRD, kidney transplantation is an option. Roughly 50% of patients with Fabry disease will require kidney transplant by fifty years of age. Graft survival has not been found to differ between Fabry patients and other causes of ESRD, however mortality post-transplant was shown to be higher in Fabry patients than those with other causes of ESRD.[13]

Frequency of follow up will be decided based upon individual physician preference and severity of disease. Follow up should be multidimensional and involve a team of physicians including neurology, endocrinology, ophthalmology, cardiology, gastroenterology, nephrology, and any other physicians assisting in the management of other disease manifestations.

Surgical management of Fabry patients is limited to controlling symptoms after damage has occurred. The most common surgical procedures patients will have include cardiac procedures (CABG, septal myectomy) and renal transplants.

Ocular prognosis: Patients placed on ERT may have a slowed progression of ocular symptoms or even regression. Further studies will need to be done to evaluate the effectiveness of ERT in reversing or halting progression.

General: By the fourth or fifth decade of life, most patients will have renal, cardiac, and neurologic manifestations of disease. The major causes of death in Fabry patients are cardiac and renal complications. The development of ERT has the potential to reduce morbidity and mortality, but long-term data is still being gathered.[14]