Familial Exudative Vitreoretinopathy (FEVR) recognized by the following codes as per the International Classification of Diseases (ICD) nomenclature:

Familial Exudative Vitreoretinopathy (FEVR) defines a group of inherited diseases with abnormal retinal angiogenesis leading to incomplete vascularization of the peripheral retina. It can be inherited in an autosomal dominant, autosomal recessive, or X-linked recessive fashion.  Genes linked to the disease discovered so far are NDP, FZD4, LRP5, TSPAN12, KIF11 and ZN408. Classically, the severity of avascular peripheral retina tends to be asymmetric and with varied penetrance within the same family. Similar to retinopathy of prematurity, this retinal ischemia may lead to secondary neovascularization causing traction, exudation, retinal folds, retinal detachment, foveal displacement, and retinal dysplasia.

In 1969, Criswick and Schepens first named and described 6 patients found in two families with FEVR. They described a familial disease that appeared similar to retinopathy of prematurity; however this disease occurred in patients without prematurity, use of oxygen, and disease continued to progress several years after birth. Some of the principal features seen were organized vitreous membranes, traction on the retina, heterotopia of the macula with temporal traction, subretinal and intraretinal exudates in the periphery (generally temporally), and peripheral neovascularization.[1] In 1971, Gow and Oliver described a large family with FEVR, which exhibited an autosomal dominant inheritance pattern. They described three stages of the disease.

Stage 1 included areas of white with pressure and white without pressure with areas of vitreous traction. Stage 1 had no evidence of subretinal exudation or abnormal retinal vessels. Stage 2 had dilated tortuous retinal vessels in the periphery, exudation, local retinal detachments in the temporal periphery and a dragged disc. Stage 3 had the advanced phase of the disease with retinal detachments, massive subretinal exudates, and other end-stage disease findings. [2]

In 1976, Canny and Oliver described the fluorescein angiography (FA) of patients with FEVR and its similarities to retinopathy of prematurity. The FA findings confirmed the capillary nonperfusion in the periphery with associated neovascularization in those areas. [3] It was not until 1992 when Li discovered that the autosomal dominant form of FEVR mapped to chromosome 11q.[4] This was later discovered to harbor the FZD4 and LRP5 genes.[5][6][7] Since then, FEVR has been described with autosomal dominant, autosomal recessive, and X-linked recessive inheritance patterns. Six genes so far have been implicated in FEVR: FZD4[6][7], NDP[8][9], LRP5[7][10], TSPAN12[11][12][13], KIF11[14][15] and ZN408. [16]

FEVR is described as a rare inherited disorder. The prevalence has not been reported yet.

In 1996, Pendergast and Trese proposed a clinical classification of FEVR based on ophthalmoscopic findings, which was simplified in 2011.[17][18] See Table 1. Of note, FEVR patients may not progress through these stages in a stepwise fashion and was meant for classifying at the time of presentation.

Criswick and Schepens initially postulated the cause of FEVR was caused by the “proliferation of fetal-type retinal vessels, much like those seen in retrolental fibroplasia.”[1] Fluorescein angiography then showed the pathogenesis to be from incomplete peripheral vascularization.[2] This incomplete vascularization can then lead to secondary neovascularization and its subsequent complications. More recently, through animal genetic models, the underlying pathogenesis is likely due to dysfunction in retinal angiogenesis. Many studies have suggested that there is also a component of atypical membrane formation in FEVR which causes abnormal traction. For instance, Yonekawa et al performed a structural OCT study which showed atypical epiretinal membranes which originate from an abnormal vitreous.[19] At this time, the underlying cause of the formation of these membranes is not fully understood. 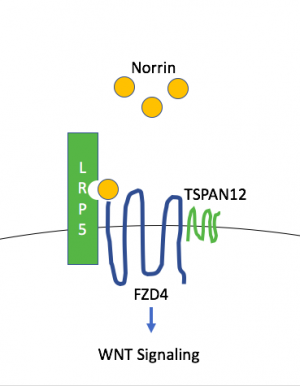 Scientists have now linked 6 distinct genes that can lead to FEVR including FZD4[6][7], NDP[8][9], LRP5[7][10], TSPAN12[11][12][13], KIF11[14][15] and ZN408. [16]. NDP, FZD4, LRP5, and TSPAN12 are part of the Frizzled4/Norrin signaling pathway which has been shown to be necessary for retinal angiogenesis and an underlying pathogenesis for FEVR.[20] In retinal vascular development, Muller glia secrete Norrin (NDP gene), part of the TGF-beta superfamily which binds to Frizzled-4 (FZD4) on retinal endothelial cells leading to WNT signaling. LRP5 is a WNT coreceptor, while TSPAN12 is thought to increase FZD4 multimerization  which enhances signaling. Mice knockout models of the Frizzled-4/Norrin pathway (FZD4-/-, NDP -/-, LRP5 -/-, and TSPAN12-/-) show a stereotypic phenotypic pattern of retinal vascular defects including: absence of the intraretinal capillary plexi, artery and vein tortuosity, intraocular hemorrhage, and secondary delayed regression of the hyaloid vasculature. However, LRP5-/- appear to have a less severe phenotype.[20][21][22] Mutations in NDP are also seen in Norrie’s disease, while mutations in LRP5 are seen in Osteoporosis-Pseudoglioma syndrome. Patients with FEVR from LRP5 mutations should be evaluated for osteoporosis as well.[8][9][10]

In a large retrospective chart review of 145 patients, the clinical presentation of FEVR patients was studied. It showed that the mean age at presentation was 58.6 months. Differentiating them from ROP patients, the mean birth weight was 2798g and gestational age was 37.8 weeks. However, the range of birth weights was from 740-4763g and range of gestational age was 25-42 weeks showing that there can be some overlap with ROP. 26% of these patients had a positive family history of FEVR. FEVR can be inherited in an autosomal dominant, autosomal recessive, and X-linked recessive pattern. The disease can be highly asymmetric between eyes with different staging. Per the above study, 43% of patients presented with the same clinical stage in both eyes.[18]

Careful dilated fundus exam is important in these patients for accurate clinical staging and determining need for further management. An exam under anesthesia may be required for diagnosis, imaging modalities, and treatment. Many of these patients will have the same physical exam findings of retinopathy of prematurity, but were born full-term, with normal birthweight, and no oxygen requirement. 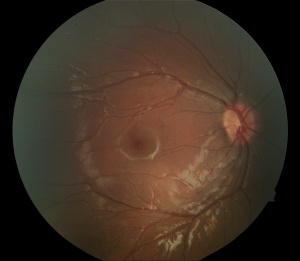 Fundus photograph of the right eye with a patient with FEVR. Notice the subtle vessel straightening but otherwise normal appearance. Compare to the left eye of the same patient showing noticeable asymmetry. 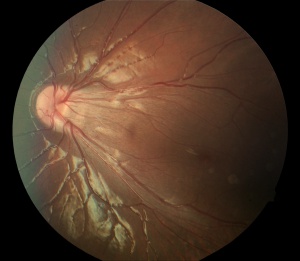 Fundus photograph of the left eye of the same patient. Notice the marked vessel straightening and dragged fovea. 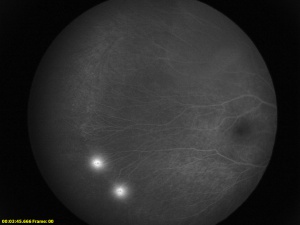 Fluorescein angiogram of the right eye, which shows peripheral avascular retina with two areas of hyperfluorescence and late leakage corresponding to retinal neovascularization. 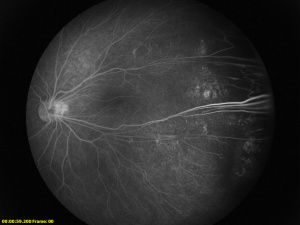 Fluorescein angiogram of the left eye, which shows a wedge of peripheral avascular retina in the temporal periphery. Notice the retina vascular dragging and anomalous architecture.

Fluorescein angiography is an important test to help with diagnosis especially in the mild stages where only peripheral avascularity can be seen. This avascular zone is classically described as a v-shaped pattern in the temporal periphery, but this can extend 360 degrees.[23] In addition, the temporal avascular zone is noted to be larger than the rest of the periphery.[23] This can be especially useful in screening family members where subtle peripheral avascularity can be more readily seen.[24] Kashani et al. described a  variety of retinal vascular anomalies in FEVR using wide-field angiography, including:[25]

Genetic testing can be offered for confirmation purposes and screening of family members if the genetic defect is known. In addition, it may be helpful if the diagnosis is unclear. However, a study in China showed mutations in the 6 known genes only account for 38.7% of patients with FEVR.[26] Genetic testing maybe helpful with differentiating between Norrie’s disease, Incontinentia Pigmenti, and FEVR. In addition, if a defect in the LRP5 gene is found, testing for osteoporosis should be performed.[10]

Benson evaluated the natural history of FEVR in 39 patients. It was found that patients who were diagnosed before the age of 3 had a more severe course with a very poor visual prognosis. The most rapid progression is generally seen in children and adolescents. If patients do not have progression before the age of 20, usually the disease remains stable. In the study, 3 eyes of 4 patients who were asymptomatic to the age of 15 had a final visual acuity of counting fingers or worse. In addition, late deterioration can be seen with retinal detachments occurring 6 to 17 years after “ apparent stabilization.”[27] Pendergast and Trese showed that patients with Stage 1 disease did not progress to a more advanced stage with a mean follow up on 33 months.[17] Further studies are needed for long term outcomes of these patients. 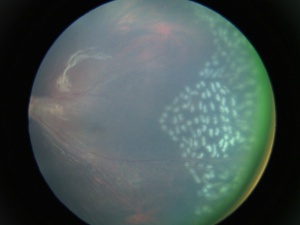 Management of FEVR depends on the clinical stage of the disease. Due to the consequences of neovascularization on visual outcomes, an early diagnosis can be vision preserving. One study showed that 58% of asymptomatic family members had  clinical and angiographic evidence of Stage 1 and 2 FEVR.[24] Therefore, adequate screening, especially of family members is important.

For Stage 1 disease, patients likely have a low likelihood of progression to advanced stages[17], so these patients may be observed. However, treating the avascular zones with laser photocoagulation can be considered, especially if the other eye is at an advanced stage. For Stage 2 disease, laser photocoagulation of the avascular zones is recommended to promote regression of neovascularization and clearing of exudation. In one study, 6 out 7 eyes with stage 2B disease showed stabilization of their disease over a mean follow up of 23.5 months.[17] Patients with more advanced disease with retinal detachments require surgical management.  Scleral buckling or vitrectomy can be considered depending on the clinical scenario with concurrent ablation of the avascular retina. Patients with Stage 3A or partial exudative retinal detachments had favorable outcomes with scleral buckling alone.[17] Few studies have studied the use of anti-VEGF in the treatment of FEVR. One case report of a patient with FEVR with neovascularization showed regression with one injection of bevacizumab with short term follow up.[28] In a larger study, intravitreal bevacizumab was used as an adjunct therapy to either laser or surgical management, dependent on clinical staging.[29] Further studies are needed to know for which clinical scenarios that anti-VEGF treatment would be beneficial.