Femtosecond (FS) laser is an infrared laser with a wavelength of 1053nm. FS laser like Nd: YAG laser works by producing photodisruption or photoionization of the optically transparent tissue such as the cornea[1]. Application of either FS laser or Nd:YAG laser results in the generation of a rapidly expanding cloud of free electrons and ionized molecules. The acoustic shock wave so generated results in disruption of the treated tissue[2] (figure 1). However, the two lasers differ significantly in the amount of collateral damage they cause. Nd:YAG laser has a pulse duration in the nanosecond range (10-9 second) where as FS laser has pulse duration in the femtosecond range (10-15 second). Reducing the pulse duration reduces the amount of collateral tissue damage. In fact, collateral damage with FS laser is 106 times less than with the Nd:YAG laser[3] [4]. This makes FS laser safe for use in corneal surgeries which require exquisite precision. 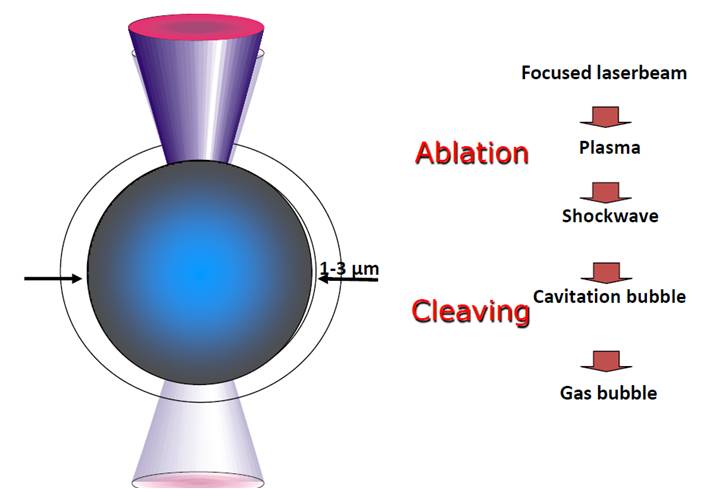 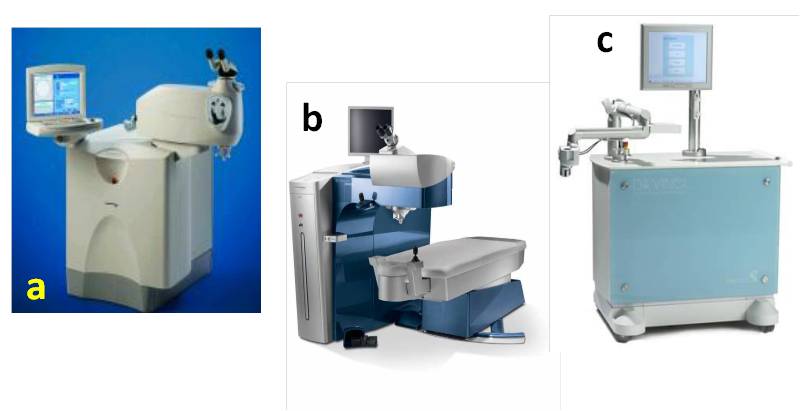 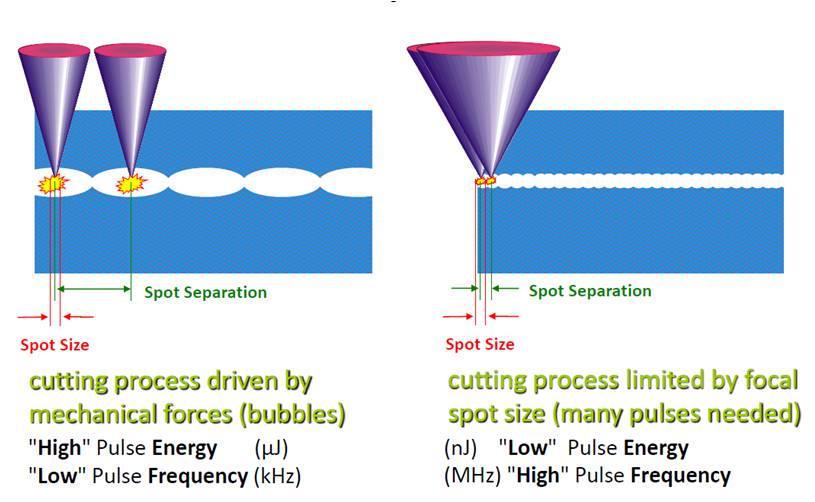 The suction ring is centered over the pupil and suction is applied once proper centration of the ring has been ensured and verified. The docking procedure is then initiated while keeping the suction ring parallel to the eye. An applanating glass contact lens is used to stabilize the globe and to flatten the cornea. It is important to achieve complete applanation of the cornea to avoid an incomplete flap or other flap related complications. Once the laser’s computer has confirmed centration, the surgeon administers the FS laser treatment. Each pulse of the laser generates free electrons and ionized molecules leading to formation of microscopic gas bubbles dissipating into surrounding tissue. Multiple pulses are applied next to each other to create a cleavage plane and ultimately the LASIK flap. Suction is then released. A spatula is carefully passed across the flap starting at the hinge and sweeping inferiorly to lift the flap for excimer laser ablation.

More than 55% of all LASIK procedures in 2009 were performed with FS laser[5]. The number was 30% in 2006[19]. FS laser offers several advantages over the conventional microkeratomes and is gaining popularity across the globe.

Other advantages include stronger flap adherence, better contrast sensitivity, decreased incidence of epithelial ingrowth, less increase in IOP required, lesser incidence of dry eyes, lesser hemorrhage from limbal vessels less likely, and the ability to retreat immediately if there is incomplete FS laser ablation[27] [28]. Loss of suction during FS laser LASIK flap creation is easier to handle and the suction ring may be reapplied and treatment resumed immediately in many cases[29]. Studies have shown FS laser to be safe and the visual and the refractive outcomes of FS laser LASIK have been shown to be superior to microkeratome LASIK in myopia[30], hyperopia[31] and astigmatism correction.[32]

As described above, FS laser has a lot of advantages over microkeratome LASIK and is gaining more and more acceptance worldwide. However, the technique presents with its unique set of disadvantages and related complications[33]. Flap creation with FS laser usually takes longer than microkeratome LASIK, however newer high frequency FS lasers have overcome this disadvantage. Some of the more significant complications unique to FS laser are

FS laser is being widely used in various ophthalmic surgical procedures. Advances in technology like lower energy systems with faster firing rates will increase the versatility and precision of the laser systems. This will further reduce ancillary tissue damage and make the surgery safer. As with any other technology, competition will likely bring down the cost of the equipment making the price per case less expensive. FS lasers hold great promise and its applications are continuing to evolve and expand in ophthalmology.