Functional Visual Loss (FVL) is a decrease in visual acuity and/or visual field not caused by any organic lesion. It is therefore also called “nonorganic visual loss” (NOVL). This entity is considered within the spectrum of “conversion disorder”, malingering, somatic symptom disorder, and “factitious disorder”(1). We prefer the term NOVL because NOVL does impact function and the eye exam is not able to differentiate the presence or absence of secondary gain.

NOVL is a decrease in visual acuity and/or visual field not caused by any organic lesion. NOVL cannot be explained by organic pathology after a complete neuro-ophthalmic examination. The decrease in visual acuity may involve one or both eyes and may vary from mild blurriness to complete blindness. The visual field defects may affect one or both eyes. They may include constricted or tunnel visual fields, and hemianopias, among other complaints or visual findings. NOVL is often but not always associated with concurrent diagnoses of depression and anxiety. The diagnosis of NOVL is frequently confirmed at the neuro-ophthalmologist's office after referral from a general ophthalmologist.

NOVL runs the spectrum from the malingerer (to feign for secondary gain) to subconscious visual loss caused by underlying psychological disorders in the patient. Thompson provided an excellent description of this spectrum of functional patients (2). At one end is the "deliberate malingerer", who is faking visual loss to gain disability, benefits, or attention, among other secondary gains. The "worried imposter" knows he is exaggerating his visual symptoms but is actually worried that he may have a serious visual problem. He does not want to miss out on future benefits. The "impressionable exaggerator" feels sure something is very wrong with his eyes and is determined not to hide the signs of his illness. He wants to help the doctor by making the disease easily recognizable. And finally, the "suggestible innocent" has convinced himself, often after some trivial injury, that one eye is blind or that he has tunnel vision, although he seems strangely complacent about it. NOVL has long been considered a prototype of conversion disorder (2). Subconscious visual loss at this side of the spectrum is commonly associated with concurrent diagnoses of depression and anxiety. Kathol et al (3) found that psychiatric disorders are present in over 50% of patients with NOVL. It is important to emphasize that non-organic disease can coexist with organic disease. For example, Ney et al have reported a high prevalence of NOVL in patients with idiopathic intracranial hypertension (4). 16-53% of patients presenting with NOVL may have co-existing organic disease with abnormal neuro-ophthalmologic exams (4-6).

The prevalence of NOVL has been reported to be 5% to 12% in neuro-ophthalmology clinics (4). NOVL more often occurs in females, but it can present in either gender. In children, NOVL is more frequently bilateral and symmetric, whereas adults usually present with monocular or binocular visual loss (5).

NOVL is commonly associated with concurrent diagnoses of depression, anxiety, panic attacks, and fibromyalgia, but many cases of NOVL have no associated DSM-5 diagnosis.

The diagnosis of functional visual loss requires positive findings and cannot be a diagnosis of exclusion (7). The key to diagnosing NOVL is to first complete a full, dilated eye examination to rule out organic causes of visual loss such as refractive error, dry eye, cataract, uveitis, maculopathy, etc. Exam reveals findings that are internally inconsistent. Why does this patient have count fingers vision in one eye and no relative afferent pupil defect? Why did the patient see 20/70 for the technician, but sees 20/30 at the physician’s repeat evaluation when encouraged to respond? Your goal is to prove and document better vision than alleged.

Probe into the history of the patient looking for a past medical history of depression and anxiety. Try to pin down the details of the onset of visual loss. Usually this information is vague, having gradually started a few days, weeks, or months ago. In adults, there may be a trivial injury that started the process. In children, there may have been a psychosocial event that acted as a trigger (9).

1. Visual Acuity (VA): Your goal is to document good VA in both eyes. An automated refractor can sometimes help in discovering uncorrected refractive errors. If the VA is still decreased, We like to use the bottom-up technique. Start with the 20/20 line and go up, instead of the opposite. Give lots of encouragement and tell the patient that you are going to make the print larger and easier to read: move to the 20/25 line, etc. Other physicians use techniques of fogging the better eye in the phoropter to prove better vision in the functional eye. Also check Near VA to look for inconsistencies. The mirror test and OKN drum are good ways to look for gross vision when the patient claims to be blind. A large hand-held mirror seduces the patient into looking and following his facial features. The standard OKN drum induces optokinetic nystagmus and corresponds to 20/400 vision. Ask the patient to read the Ishihara color plates. If the patient can see the numbers, they are at least 20/200 or better. Additionally, pay attention to the behavior of the patient. If the patient is able to use their mobile phone, e.g. for texting, then their vision is likely better than the obtained by exam.

2. Visual Field (VF): Always do confrontation VFs in these patients. Commonly, you will see constricted fields. If this occurs, move back from 1 meter to 2 meters to check for tunneling of the visual field. Remember that the normal visual field is a funnel, not a tunnel (see image below). The VF should expand as the target moves farther from the eye.

3. Motility: When a patient has repeatedly demonstrated constricted (tunnel) VF on your exam, you can lure them into offering proof of their normal peripheral VF by checking saccades. Tell them that you are checking the speed of their eye movements. With their eyes fixated on your nose, have them saccade to your fingers placed nonverbally to the far left and right. Accurate saccades into the supposedly blind VF is evidence for NOVL. Also carefully observe how the patient ambulates into and out of the exam room as well as how easily they find your hand to shake. They usually have no difficulty. Remember to document these inconsistencies in your exam.

4. Pupil Exam: The pupil exam must be performed and documented well. Pupil size, reactivity, and the presence or absence of a relative afferent pupillary defect (RAPD) is paramount. It is an objective measure in the exam unlike VA and VF, which can be subjective. 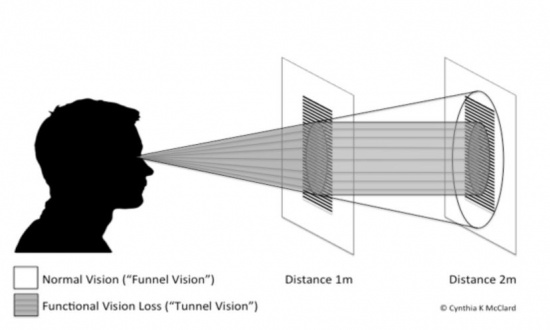 Simple reassurance of a normal eye exam is an effective treatment. Around 1900, Babinski stated that functional manifestations were caused by suggestion and could be cured by persuasion. This is a simple and sensible rule (2). Remember to stress a good prognosis, thereby providing a way out for the patient: "Most people with this kind of trouble find that their vision gradually gets better, and I expect the same for you." Stay calm and do not confront the patient concerning his inconsistencies on exam. Follow-up appointments are important to document improvement as well as to look for co-existent organic disease. Ask about underlying stress, anxiety, and depression. If the patient desires, refer for appropriate psychological treatment. When the patient accepts that stress, anxiety, and depression can indeed be the cause of his or her problem, he or she may begin to regain lost vision (9).

It is recommended that documentation of exam findings and other determinants of diagnosis of NOVL are performed with care, as there may be medicolegal consequences that result for the patient. For example, a diagnosis of “malingering” may bar the patient from access to services in some states in the USA or may preclude them from future compensation (10).

Follow-up appointments are important to document improvement as well as to look for co-existent organic disease. Reassurance is often all that is necessary in the majority of cases.

Remember to stress a good prognosis, thereby providing a way out for the patient: "Most people with this kind of trouble find that their vision gradually gets better, and I expect the same for you." Normalization of visual function occurs in a majority of patients (9). Most patients with isolated NOVL do not harbor DSM-5 diagnoses, but select patients might benefit from counseling or formal psychiatric evaluation.