Nd:YAG laser goniopuncture can be considered an integral component of nonpenetrating glaucoma surgery. When filtration through the trabeculo-Descemet’s membrane is insufficient, a membranotomy (goniopuncture) can be performed.

Intra ocular pressure (IOP) control after non‐penetrating deep sclerectomy depends on filtration through the trabeculo-Descemet’s membrane. If this lamella is too thick due to insufficient surgical dissection or excessive postoperative fibrosis, IOP rises. The early (1 week to 2 months) postoperative increase in outflow resistance is probably due to incomplete surgical dissection, and a late increase in aqueous humor outflow resistance is probably secondary to trabeculo-Descemet’s membrane fibrosis, pigment deposition, or both. This trabeculo-Descemet’s membrane can be visualized using a gonioscopy contact lens as a semi-transparent membrane, and a goniopuncture performed. These microperforations restore/allow the percolation of aqueous through the trabeculo-Descemet’s membrane, converting a failing bleb into a functional one by allowing aqueous egress directly from the anterior chamber to the intrascleral space. Although this effectively converts nonpenetrating glaucoma surgery to a penetrating procedure, performed in the safety of the postoperative period after bleb formation, it dramatically reduces the concern for hypotony-related problems.

When it appears as though nonfiltering glaucoma surgery has not achieved a satisfactory level of IOP, a secondary intervention such as goniopuncture may be considered. It can be difficult to definitively identify the reason for any elevation in IOP and the mechanism for this may differ between patients (intraocular viscoelastic, postoperative steroid, scarring of the trabeculo-Descemet’s window, or other reasons). Gonioscopy is a very useful tool in determining whether there is outflow obstruction at the site of the trabeculo-Descemet’s window. The presence of blood, debris, or neovascularization in the scleral lake may be indicative of impending fibrosis. High-resolution anterior segment imaging such as ultrasound biomicroscopy or anterior segment optical coherence tomography can also be used to evaluate Descemet window and to ensure that the intrascleral lake is well formed. Specifically, it is possible to observe whether the window appears more thickened or shows actual concavity toward the scleral lake, demonstrating that sufficient aqueous is not percolating through the window. Any of these signs associated with an elevated IOP are good indicators that goniopuncture may be beneficial. Goniopuncture can be contemplated in the early or late postoperative period but should be performed before total fibrosis or collapse of the intrascleral lake. It is relatively contraindicated for the first four weeks following surgery, as it has the potential to cause a sudden decompression, and anterior chamber colapse. Goniopuncture can be performed many months to years after surgery if progressive IOP elevation occurs due to fibrosis of the TDW. In one study a single goniopuncture decreased IOP 20% from pre‐laser levels for at least 2 years in about 50% of cases. [1]

Following topical anesthesia and pre-medication with Apraclonidine 1% and Pilocarpine eyedrops, the patient is taken up for the goniopuncture with Nd:YAG laser. With a gonioscopy contact lens, the aiming beam is focused on the semi-transparent trabeculo-Descemet’s membrane, which often is noted as a difference in the appearance of the peripheral cornea, described as a light opalescence, and has a concave appearance. In the free-running Q-switched mode, with a spot size of 3–10 μm, with a power of 5–15 mJ, 4 to 15 shots are applied. Nd:YAG laser goniopuncture should be done anteriorly to minimize risks of peripheral anterior synechiae or iris herniation. Argon laser iridoplasty may be performed near the site of the trabeculo-Descemet’s window if goniopuncture is planned, to reduce the risk of iris incarceration after laser goniopuncture.

After such laser treatment, topical corticosteroids (prednisolone acetate 1%) are given three times a day for 3 days to control post-treatment inflammation. Any glaucoma medications should be continued until a post-procedure follow-up visit. Patients should return for follow-up care in 1 to 3 weeks depending on the pre-laser IOP, the perceived risk of complications such as iris incarceration, and the timing of the goniopuncture. 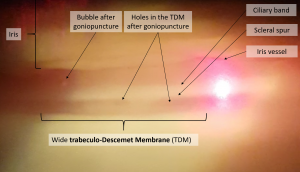 Since goniopuncture is usually performed several months after deep sclerectomy, it’s not commonly followed by the typical complication of ocular decompression. Although rare, complications of goniopuncture include inflammation, hyphema, hypotony with or without choroidal detachment, anterior synechiae, and iris prolapse. The most relevant complication, occurring in up to 25% of patients after this laser procedure, is iris incarceration, particularly if the openings are too large or placed too posteriorly, IOP is not lowered with medications before treatment and if digital massage is per¬formed afterwards. In order to prevent these complications, eyes should be treated before goniopuncture with pilo-carpine, and systemic carbonic anhydrase inhibitor or apra¬clonidine (in case of elevated IOP). Digital massage should never be performed. Formation of iris adhesions and/or iris incarceration through inadvertent surgical microperforations or goniopuncture site may also result in failure of the procedure. If medical management with miotics does not restore IOP control, laser or surgical synechiolysis may be considered.

Nd:YAG laser goniopuncture can be considered an integral component of NPGS and has contributed to enhance surgical success and lower IOP levels, and should be considered as the first line treatment for postoperative IOP increase in cases of non-penetrating glaucoma surgery.