Interface fluid syndrome is a rare, but vision-threatening postoperative complication of LASIK surgery characterized by fluid collection in the flap interface that was first described by Lyle and Jin.[1] Other common nomenclature for IFS includes pressure-induced stromal keratitis (PISK) and pressure-induced interface keratitis.[2] It has also been noted in small incision lenticule (SMILE) surgery and lamellar keratoplasty.[3][4]

IFS usually results from increased intraocular pressure (IOP) that is triggered from postoperative steroid use.[2][5] However, any condition that increases IOP is a potential cause of IFS in patients with prior LASIK or SMILE surgery. IFS have been noted in cases of uveitis and Posner Schlossman Syndrome.[6][7] IFS has also been noted in cases with corneal endothelial decompensation, such as Fuch’s corneal endothelial dystrophy.[8] It has also been noted many years after DSAEK surgery, [9] vitrectomy [10]

Gab-Alla reported the incidence of IFS in Egyptians to be 2.9%; however, the incidence is likely a lot lower in general population as this study used a more potent topical steroid (dexamethasone) in the post-LASIK management.[11]

Patients that have underwent surgery that can cause a potential space between stroma and the flap are at risk for IFS. Interface fluid syndrome is most common in LASIK patients, but it has also been noted after SMILE and lamellar keratoplasty.[1][3][2] Other risks factors include high intraocular pressure and endothelial cell dysfunction.[6][7][8][12][13]

Increased intraocular pressure seems to be essential to mechanism of IFS. A study of human eye bank corneas proposed 2 mechanisms of IFS.[14] The first entails increased intraocular pressure and the second is due to corneal endothelial dysfunction. Increased IOP causes shift of fluid through the endothelium from zones of high pressure to low pressure, and in the case of LASIK, interface space is the area of low pressure and subsequently where fluid collects in patients with IFS.[15] [16]

Patient usually presents with blurred vision a few days to a few months after uncomplicated LASIK surgery. There are cases reported 1 to 16 years after LASIK surgery.[7][12] Patients may also complain of pain and photophobia. The typical presentation is a patient with history of uneventful LASIK surgery who has been on topical steroids for extended period of time. 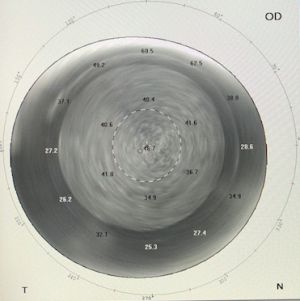 Fluid collection in the SMILE interface on Scheimpflug photography (pentacam)

On exam, the vision can vary from mild impairment to hand motion vision. Intraocular pressure is increased but can be falsely measured normal in patients with IFS.[17][18][19] IOP should be measure peripherally with tonopen or other tonometers that are less likely to be influenced by corneal rigidity. Goldmann applanation tonometry of central cornea may provide falsely low IOP reading due to easy compressibility of fluid-filled space.[20][21] Patient may also have anterior chamber inflammation. Corneal haze is present at interface wound. The amount of fluid at interface wound is variable and an obvious fluid layer may not always be visible at the slit lamp.[22]

Confirmation of fluid collection in SMILE interface with OCT

Diagnosis is through clinical history and slit lamp examination and confirmed with OCT. Ancillary testing such as OCT and corneal densitometry may aid with diagnosis and monitoring clinical course.[2][23]

It can be useful to confirm interface fluid accumulation in the cap-bed interface and monitor the clinical course.[2]

One study showed that corneal densitometry can be useful for evaluating and grading IFS.[2]

There are no specific tests for diagnosing IFS.

Timely diagnosis of IFS is crucial to preventing permanent vision loss. Although IFS typically occurs 1-3 days postoperatively, IFS have been known to occur for several years after LASIK, so it is important to able to discern IFS.[7][12] [24][25],[26] Post-LASIK patients on chronic topical steroids should have their IOP be checked vigilantly and artificially low or normal IOP may be measured in corneas of IFS, so unconventional methods of measuring IOP should be used. In IFS with large fluid clefts, the cushioning effect of the interface fluid will give falsely low IOP readings. Peripheral IOP measurement or dynamic contour tonometry may be necessary. Due to the consequence of steroids on the pathophysiology, IFS must be differentiated from DLK as the treatment for DLK (steroids) will worsen IFS.

In most cases, management generally consists of cessation of topical steroids and starting IOP lowering agents. In some cases, surgical intervention was needed to lower the IOP.[8],[27] Shajari et al presented a case of IFS after LASIK that was managed with Descemet's membrane endothelial keratoplasty.[8]

IFS is commonly seen after LASIK; however with the increasingly popularity of SMILE, IFS should also be on the differential for post-SMILE complications.[3]

If diagnosed early and appropriately managed, patients do well without any loss of visual acuity.