Orbit has a close anatomical relationship to paranasal sinuses

A good understanding of sinus anatomy and their relationship to the critical ophthalmic structures is paramount in the management of orbital pathology and trauma, as well as some orbital or lacrimal procedures.

The paranasal sinuses are pairs of air-filled cavities with variable morphologies located within the bones of the skull. They are lined by a respiratory epithelium and have drainage at specific places on the lateral wall of the nasal cavity. The four of them- the maxillary, the frontal, the ethmoid and the sphenoid sinuses- are named based on their corresponding bones and are respectively (and approximately) inferior, superior, medial and posterior to the orbits. The sinuses are innervated by the ophthalmic and maxillary divisions of trigeminal nerve and their vasculature derives from the ophthalmic and maxillary arteries. Their functions include lightening the skull while severing as a buffer against fractures, resonating the voice, increasing the humidity and heat of inspired air, and insulating against sudden temperature changes. They also have immunological function. 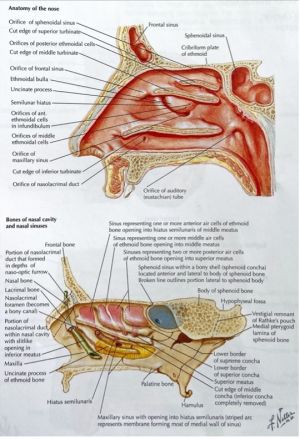 The sinuses as well as the nasolacrimal duct all have drainage into the nasal cavity, which is anatomically complex and bordered by multiple bones (and cartilage) of the cranium and face:

Relations to surrounding structures are as follows :

Arteries supplying the nasal cavity includes anterior and posterior ethmoid (from ophthalmic), sphenopalatine and greater palatine (from maxillary), and superior labial (from facial). Innervation of sensation is by ophthalmic and maxillary divisions of the trigeminal nerve, olfaction by olfactory nerve (CN1) and autonomic functions by postganglionic fibers travelling along the maxillary division of the trigeminal nerve from the pterygopalatine ganglion (parasympathetic) and the superior cervical ganglion (sympathetic).

A general understanding of the nasal anatomy is useful in nasolacrimal duct procedures (i.e. NLD probing and stenting). Upon entry in the nares, the device should be directed laterally and inferiorly, and it should run along the junction of the lateral wall and floor of the nasal cavity to be inserted into the inferior meatus. 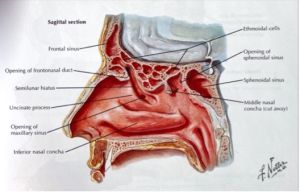 The ethmoid sinuses are composed of 3-18 pairs of air cells within the ethmoid labyrinth and can be divided into anterior, middle and posterior ethmoid cells with distinct drainage locations in the nasal cavity. These thin-walled cavities can invade the other paranasal sinuses. Relations to surrounding structures are as follows:

Practically speaking, four parallel lamellae with oblique orientation make up the complex ethmoid labyrinth and correlate to specific structures found on the lateral wall of the nasal cavity: the uncinate process, the ethmoid bulla, the basal lamella of middle concha, and the superior concha.[4]

Lamina papyracea forms the medial wall of the orbit. This is a thin bony structure that has important clinical relevance. In pediatric patients, paranasal sinusitis most often involves the ethmoid sinus, and it can spread through the thin lamina papyracea of the medial orbital wall into the orbit, resulting in an orbital cellulitis.[6] Furthermore, damage to the lamina papyracea is a potential complication of endoscopic sinus surgery. This can lead to permanent ocular motility disorder and visual impairment due to its proximity to the extraocular muscles and optic nerve.[7]

The frontal sinuses are a pair of typically asymmetric and triangular air cavities separated by the frontal septum. Relations to surrounding structures are as follows:

It communicates with the nasal cavity through the frontonasal duct (also known as the frontal recess), which opens into the middle meatus or the ethmoidal infundibulum. The frontonasal duct’s boundaries are agger nasi cell anteriorly, lamina papyracea laterally and middle concha medially.

A mucocele developing in the frontal sinus can compress orbital contents inferiorly, causing hypoglobus and ophthalmoplegia. 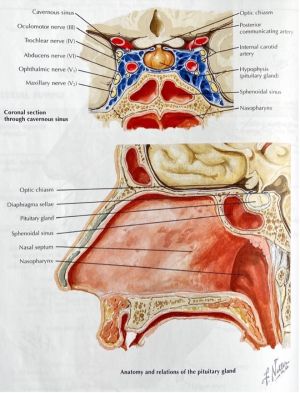 The sphenoid sinuses are the most posterior of paranasal sinuses. They are of irregular shape and are asymmetric due to the irregular septum. Relations to surrounding structures are as follows:

The sphenoethmoidal recess is the location of drainage into the nasal cavity and can be found in the superior meatus or above the superior concha.

Sphenoid sinus is in close relationship with the optic canal. In fact, the optic canal is located superior and lateral to the sinus wall. Sinusitis within the sphenoid sinus and the posterior cell of ethmoid sinus can thus compress the optic nerve, causing an acute retrobulbar optic neuropathy. 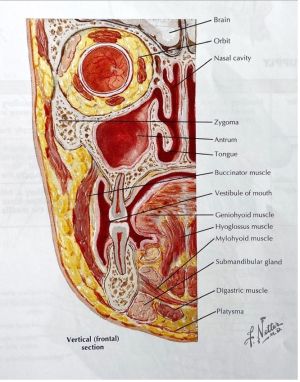 The maxillary sinuses are the greatest in size of all the paranasal sinuses. They have thin bony walls and are shaped like pyramids whose base is the lateral wall of nasal cavity and the apex toward the zygomatic process of the maxilla. Relations to surrounding structures are as follows:

The floor of the maxillary sinus can occasionally be interrupted by the protrusion of the roots of upper premolars and molars, and can drop inferiorly via resorption of alveolar bone after tooth loss. Another anatomical feature related to tooth loss is the formation of secondary septa within the sinus; primary septa are developmental. The roof of the maxillary sinus correlates with the orbit floor, where the infraorbital nerve and artery courses through the infraorbital groove, into the canal and exits via the foramen of the same name on the anterior wall of the sinus. The maxillary tuberosity makes up the posterior wall and is in close proximity to the pterygopalatine fossa and its contents. The maxillary sinus communicates with the nasal cavity medially through its ostium in the nasal fontanelle and into the semilunar hiatus of middle meatus .