Keratoacanthoma (KA), also known as molluscum sebaceum [1], is a hyperkeratotic dome-shaped nodule that can grow up to one to three centimeters within a few months. It is a low-grade skin tumor found on sun-exposed areas such as the head, hands, arms and trunk.[2][3] It is most important for the ophthalmologists because it can occur on the eyelids. Although KA is characterized by a benign growth, its differentiation from squamous cell carcinoma (SCC) is of upmost importance. For some, KA represents a spontaneous regressive form of SCC ,[4] [5] while other researchers favor a strict differentiation between these two entities based on gene expression [6] and/or expression of cutaneous markers.[7]

KA is primarily associated with sun exposure in elderly people. Chemical carcinogens also play a role in its pathogenesis.[8] No genetic basis has been yet identified. 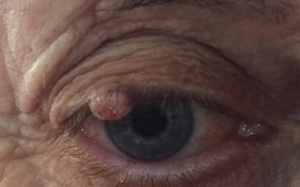 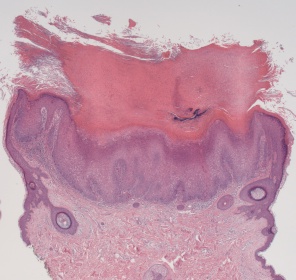 There is no single histological finding that can characterize keratoacanthoma. Rather, histologic diagnosis requires a constellation of findings:

Variants (from a dermatologic point of view)

KA commonly presents in old men with fair skin on sun-exposed area. It is a self-limited benign growth characterized by a rapidly enlarging, solitary flesh-colored nodule, followed by a period of stability, which later involutes, leaving behind a scarring lesion. [8] [2]

KA lesions classically present as a quickly growing, firm, flesh-colored papule. The proliferative phase is characterized by a symmetrical, smooth surfaced lesion that progressively ulcerates, forming a hyperkeratotic dome-shaped nodule; often described as a horn like projection. [2]Within 1-2 months, it can rapidly grow to 1-2 cm. If on the nose or eyelids, extensive local tissue destruction may occur. Although the duration of the lesion may be variable (few months to a year), it often spontaneously regresses leaving behind a hypopigemented scar.[9]

Excisional or deep incisional biopsy of the lesion is the preferred tool for establishing the diagnosis of KA. [3]

The diagnosis can be done by Histology.