Corrective spherocylindrical lenses are commonly used to treat refractive errors such as myopia, hyperopia, presbyopia, and astigmatism. Both lenses and prisms are also frequently used to improve eye alignment and treat diplopia in strabismus. Eyeglasses also serve an important role in protecting the eyes from physical trauma and harmful radiation. Lenses can be produced using a variety of materials and designed with several optical profiles to optimize use in specific applications. Critical lens properties include refractive index, Abbe number (chromatic dispersion), specific gravity, and ultraviolet absorption.[1] 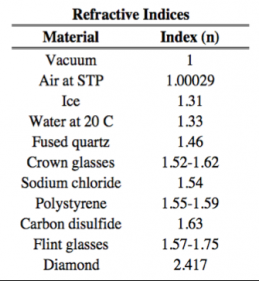 Figure 1. Indices of refraction of various materials and lenses. [2]

Refraction is defined as the change in direction of a wave of light as it passes from one medium to another.[2] The amount that the light changes direction depends on the indices of refraction of each medium, and is described quantitatively by Snell's law (Equation 1). The index of refraction of a material describes how fast light travels through a material and is defined by the speed of light in a vacuum (3 x 108 meters per second) divided by the speed of a given wavelength of light in the medium (Equation 2).[2] The indices of refraction of a few materials and lenses are listed in Figure 1.

Equation 1. Snell's Law relates the indices of refraction (n) of two media to the directions of propagation in terms of the angles to the normal.[2]

A common misperception is that lens materials with a higher index of refraction have a higher physical density (mass over volume). In reality, it is not the physical density but rather the optical density of the material that determines the speed of a light wave through a medium. The optical density, or absorbance, of a material is a logarithmic ratio of light intensity entering versus exiting a particular material. The change in intensity is due to the tendency of atoms to dissipate some of the energy through vibration as light passes through it.[3] 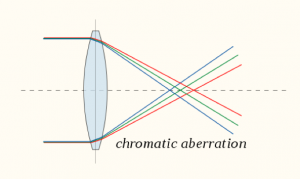 Figure 2. Chromatic aberration results in a single beam of light to have a different focal point for each wavelength.[6] 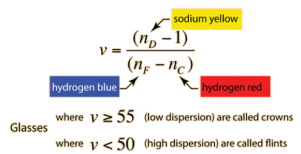 Figure 3. Calculation of the Abbe number to describe the amount of chromatic dispersion for a medium.[9] 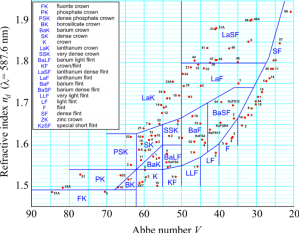 Figure 4. The Abbe diagram compares various glass types by plotting its refractive index at a wavelength of 587.6nm and Abbe number. The red dots denote each glass type, and the blue labels subcategorize the glass types.[10]

Crown glasses are optical glasses with low chromatic aberration (Abbe number above 55 or 50) which tend to have low refractive index.[11] Many optical components such as lenses, mirror substrates, optical windows, and prisms are made from crown glasses. They are particularly useful for imaging applications as they minimize chromatic aberrations.[11]

Flint glasses are optical glasses with high chromatic aberration (Abbe number below 50) which tend to have a high refractive index (typically greater than 1.55).[12] Corrective glass lenses are often made from flint glass as the higher refractive index allows for a lighter weight. Dispersive prisms are also often constructed from flint glass to achieve a high angular dispersion.[12]

Chromatic aberration can be corrected by combining the crown and flint glass elements to make a compound lens. This is achieved by apposing the two lenses and shaping them so that the chromatic aberration of one is neutralized by the other. The ultimate goal is to reduce the chromatic focal shift—the distance between focal points of dispersed wavelengths by a lens—between different wavelengths on the visible spectrum.[13]

Ultraviolet light can be broadly categorized into UVA (400-320 nm), UVB (320-290 nm), and UVC (290 nm to 10 nm). Ultraviolet light makes up 5% of all solar radiation falling on the Earth; among the 5%, 90% is composed of UVA and 10% of UVB. Nearly all UVC is absorbed by the ozone layer of the atmosphere. UVC exposure typically occurs from manufactured resources. Ultraviolet light can cause damage to tissue by disrupting molecular bonds and incapacitating their function. These molecules can also be damaged by action of free radicals produced as a byproduct of ultraviolet light in the presence of oxygen and a photosensitizing pigment.[16] 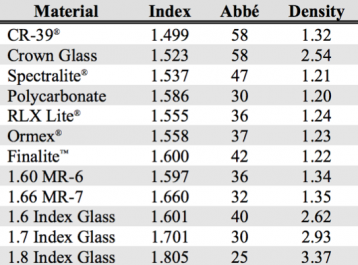 Figure 5. Summary of common lenses and their properties.[18]

Glass had been the material most widely used for ocular lenses until the 1970s. Glass provides superior optical quality and has the most scratch-resistance surface, however it has several limitations including heavy weight, increased thickness, and low impact resistance. Glass lenses must be treated to comply with the American National Standards Institute impact resistance standards.[17] Chemical or thermal tempering can increase the shatter resistance, however this effect is lost if the lens is scratched or worked on with any tool after tempering. Individuals with myopia who desire thin glasses may opt for high-index glass, however the highest-index glass lenses cannot be tempered and require patients to sign a waiver accepting the risk of breakage. Additionally, high-index glass does not block ultraviolet light without a coating.[16]

Plastic lenses gained popularity in the 1970s and have the benefits of weighing half as much as glass lenses due to their lower specific gravity and having high optical quality.[17] CR-39 which stands for Columbia resin #39 is the most commonly used plastic polymer lens material. The lenses block 80% of ultraviolet light without treatment, and can be tinted and coated to provide further ultraviolet light blocking. Plastic lenses tend to have a lower index of refraction, which require thicker lenses. The lens surface is also softer and thus easier to scratch, however scratch-resistant coatings are available to create a harder surface. CR-39 lenses in particular do not have the shatter resistance of polycarbonate or Trivex, increasing risk to wearers.[16]

High index polycarbonate lenses were popularized in the 1980s due to light weight, thin profile, superior impact resistance, and ultraviolet protection. These lenses are often recommended for children, young adults, individuals with active lifestyles, and as safety eyewear. They are very durable and can be up to 30% thinner than regular glass or plastic lenses.[17] Disadvantages include high chromatic aberration indicated by its low Abbe number, which results in color fringing most noticeable in strong prescriptions. Additionally, polycarbonate is the most easily scratched plastic, thus requiring a scratch-resistant coating.[16]

Trivex was introduced in 2001 and is a highly impact-resistant material with a low specific gravity delivering strong optical quality and minimal chromatic aberration indicated by its high Abbe number. Trivex is also able to block nearly all ultraviolet light. A disadvantage of Trivex lenses is its low index of refraction, thus requiring thicker lenses for higher powers. At the ±3.00 Diopter prescription range, this material allows for a comparably thin lens. Trivex is the lightest material available and meets high-velocity impact standards. A scratch-resistant coating is required for this lens.[16]

High-index materials are defined by a refractive index of 1.60 or higher, and can be either glass or plastic. The main utility of high-index lenses is for high-power prescriptions to create thin and cosmetically attractive lenses.[16] The weight, optical quality, and impact resistance of high-index lenses vary based on the material used. For high-index glass, the specific gravity tends to run high, which means that these lenses are often heavy compared to other materials. None of the high-index materials pass the American National Standards Institute’s impact resistance standards.[16]