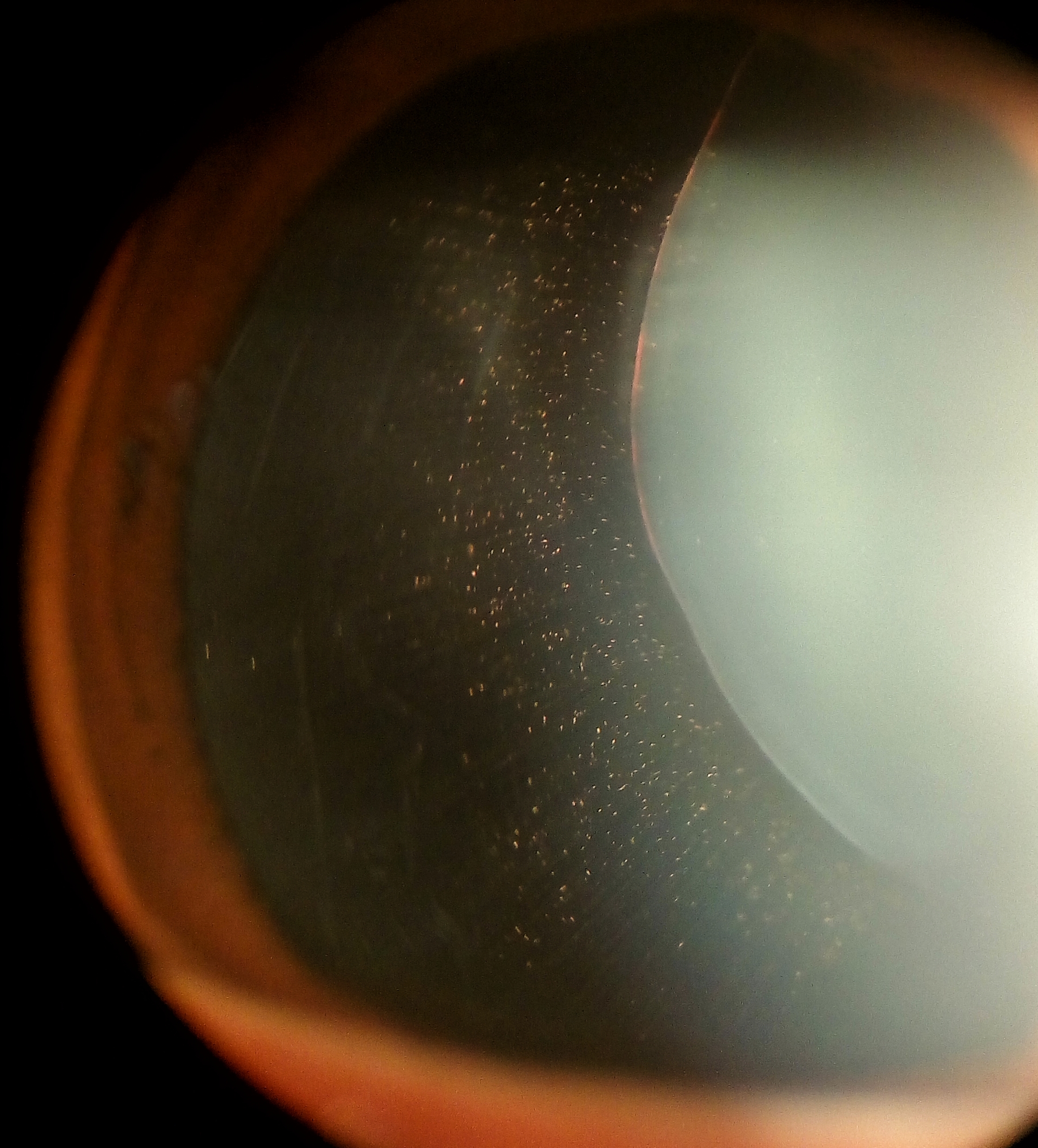 Marfan syndrome was first formally described by Antoine Marfan in the Bulletin of the Medical Society of Paris in 1896. His description told of a 5-year-old girl with arachnodactyly, although many of the associated findings, including why early deaths were so prevalent, took almost 50 more years to uncover.[1] Marfan syndrome has captured the curiosity of those outside of medicine as well. Edgar Allan Poe wrote a short story almost 70 years before Antoine Marfan’s recognized account that portrayed a character with remarkable similarities to one who has Marfan Syndrome:

“But in no regard was he more peculiar than in his personal appearance. He was singularly tall and thin. He stooped much. His limbs were exceedingly long and emaciated. His forehead was broad and low… In moments of excitement the orbs grew bright to a degree almost inconceivable; seeming to emit luminous rays, not of a reflected but of an intrinsic lustre, as does a candle or the sun.”[2]

Though not credited with the condition’s namesake, the ophthalmologist Whilliams gave a complete description of the syndrome 20 years before Antoine Marfan in 1876.[3]

Marfan syndrome (MFS) is the second most common inherited connective tissue disorder, second only to osteogenesis imperfecta.[4] It follows an autosomal dominant inheritance pattern and has an estimated incidence of 1 in 5000 worldwide, although approximately 25% of patients are affected by a sporadic mutation.[5] It affects both sexes equally and is found in all races.[6]

MFS is most commonly a genetically inherited disease that is caused by a mutation in the FBN1 gene on chromosome 15.[7] With an autosomal dominant pattern of inheritance, one would expect to see a 50% chance of passing the defect onto their offspring. However, genetically inherited diseases, especially autosomal dominant ones, are subject to the concepts of pleiotropy and variable expressivity.[8] Pleiotropy describes one gene contributing to multiple phenotypic effects, whereas variable expressivity describes a phenotype varying among individuals with the same genotype. Thus, while members of the same family may have the Marfan genotype, they are subject to a variety of phenotypes. These concepts helps explain why patients often present at different stages in life with highly variable presentations. De novo mutations in the FBN1 gene account for about 25-30% of diagnoses.[5] [6]

The cytogenic location of FBN1 is 15q21.1, which is the long arm of chromosome 15 (Fig 1). The FBN1 gene is the blueprint for fibrillin-1, a protein with an unusually high cysteine content that contributes to the formation of microfibrils and the extracellular matrix. These threadlike filaments form elastic fibers that enable skin, ligaments, and blood vessels to stretch. They are also an integral part of support for the nerves, muscles, and lenses of the eyes.[9] Another important feature of microfibrils is their role in regulating TGF-β. TGF-β is a growth factor that ultimately helps control growth and proliferation of cells, differentiation of cells, and the self-destruction of cells.

Fibrillin can be found in the corneal basement membrane, the sclera, and the zonular fibers, which explains many of the ocular manifestations of MFS. The zonular fibers originate from the nonpigmented epithelium of the ciliary body and attach to the lens capsule at the anterior and posterior equator to provide the lens’ support. When a mutation occurs in the fibrillin gene, and particularly when the mutation involves a missense mutation involving a cysteine, zonular weakness and subsequent lens subluxation is more likely to result. The location of the mutation within the fibrillin gene appears to play a significant role in the degree and severity of both ocular and systemic manifestations.[10]

MFS is a systemic disease that classically affects the cardiovascular, musculoskeletal, and ocular systems. Non-ocular manifestations include:

As a result of variable expressivity and penetrance, even members of the same family afflicted by MFS may show a variety of different signs and symptoms.

The diagnosis of MFS is made through the Revised Ghent Nosology, and it is inevitably complex given the wide variability in presentation of the disease. This is summarized in Table 1.[11] In addition, there are a number of systemic contributions to the diagnosis of MFS, and the presence of 7 or more will aid in making the diagnosis of the condition (Table 2).

The cardiac manifestations of MFS are part of the crux to diagnosing this condition. Table 1 outlines how a Z score of greater than or equal to 2 in combination with other qualifying features helps contribute to the diagnosis of MFS. This measurement is taken at the level of the sinuses of Valsalva and perpendicular to the flow of blood (ie. a cross sectional image of the aortic outflow tract). The aorta is not a static system, and there are changing variables throughout the beat cycle. Evidence of any sized aneurysm with ectopia lentis and the FBN1 gene mutation definitively makes the diagnosis. 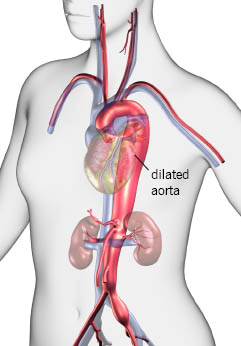 Table 1. Z represents the ‘Z-score’ or the aortic diameter. FBN1 is the fibrillin-1 mutation, which in and of itself has a set of criteria as well. The criteria for FBN1 include genetic variations originating from splice sites, nonsense mutations, missense mutations, and others. 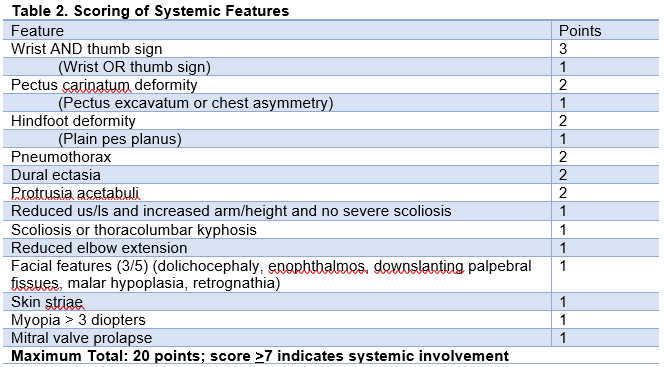 Ocular abnormalities occur in approximately 80% of patients with MFS, with the most common abnormality being ectopia lentis (50% to 80% of MFS patients). Ocular manifestations include: 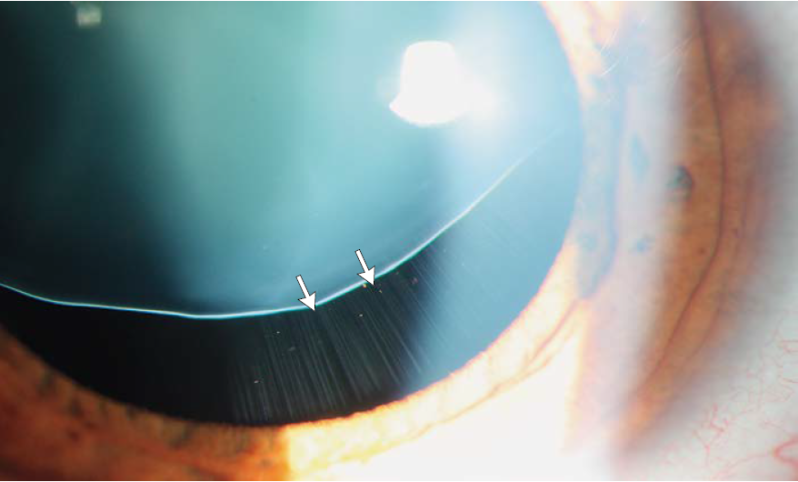 Figure 3. Ectopia Lentis in a patient with MFS [13]with stretching of the zonular fibers (arrows).

Not surprisingly, MFS represents the systemic disease most commonly associated with ectopia lentis. Classically the lens will dislocate superotemporally, and although any direction of dislocation is theoretically possible, only 20% will dislocate in a non-superior direction. The zonules are often stretched but intact, and iridodonesis and phacodonesis are apparent during slit lamp examination.[14] Pupillary block glaucoma may develop if the lens dislocates into the pupil or anterior chamber. Ectopia lentis is such a strong diagnostic feature of MFS that the diagnosis can be made simply in the presence of ectopia lentis combined with either positive family history of MFS or an enlarged aortic diameter (Z>2). A second major ocular feature of Marfan syndrome is myopia, which accounts for one of the Revised Ghent Nosology systemic features (Table 2). A point is determined by a myopic refraction of greater than 3 diopters. Myopia can be so severe that patients undergoing lens extraction may not require IOL implantation. Uncorrected high refractive error and/or significant anisometropia secondary to lens subluxation occurring in early childhood can contribute to the development of amblyopia.

Loeys et al proposed the idea of ELS for those patients with ectopia lentis in the absence of aortic involvement but with a genetic suggestion of MFS.[11] This diagnosis cannot be made prior to age 20, and it’s suggesting should prompt a thorough assessment for other features of MFS.

Homocystinuria is caused by a deficiency in the enzyme cystathionine B-synthase. This enzyme is involved in the transsulfuration pathway that transforms homocysteine to cystathionine. This molecule goes on to form cysteine, a commonly incorporated proteogenic amino acid, which contributes to glutathione that in and of itself is an important antioxidant. When the enzyme cystathionine B-synthase is absent, there are a few unique clinical features. Bilateral lens subluxation can occur, as seen in MFS, but in this case, they typically sublux downward and medially. Patients can also have severe myopia. The general appearance of these patients is like the marfanoid habitus with excessive height, long narrow limbs, scoliosis, and pectus excavatum, but without joint hypermobility. Another clinical feature distinguishing this from Marfan syndrome is presence of intellectual deficits and possible seizure. There can be vascular abnormalities with an increased incidence of thromboembolism, which is the major cause of death and morbidity.[15] The classic biochemical feature of this disease is caused by increased concentrations of plasma total homocysteine and methionine. Urine testing with the nitroprusside urine test may show increased excretion of homocysteine. In addition, there are B6-responsive and B6-unresponsive variants, in which the former is more mild.

Features of this disease include:

When the diagnosis of MFS is either made or suggested, patients need to be closely monitored for development of aortic root dilatation. All individuals who met criteria for MFS should initially have at least yearly echocardiograms.[11] If there is rapid change in the size of the aorta or a size reaching surgical threshold (>4.5cm in adults), more frequent surveillance should be utilized. In order to prevent complications secondary to aortic root dilation, B-blockers are most often employed for both children and adults, unless there is a specific contraindication.

At minimum, yearly ophthalmologic exams are necessary for the detection and management of ectopia lentis and its complications. MFS patients should be monitored for the development of ectopia lentis, cataract, glaucoma, and retinal detachment. Children should be monitored closely and treated for amblyopia as indicated. Both the aphakic and phakic portions of the pupil may be refracted to improve visual acuity with use of glasses or contact lenses.

In the setting of lens subluxation, indications for lens extraction as delineated by Nemet et al[6] include:

All complications of lens extraction are possible in patients with MFS and occur with a higher frequency compared with the general population. Advanced surgical techniques are often required to improve outcomes.

As a result of their systemic manifestations, particularly cardiovascular complications, MFS patients have a life expectancy that is approximately half that of the normal population.