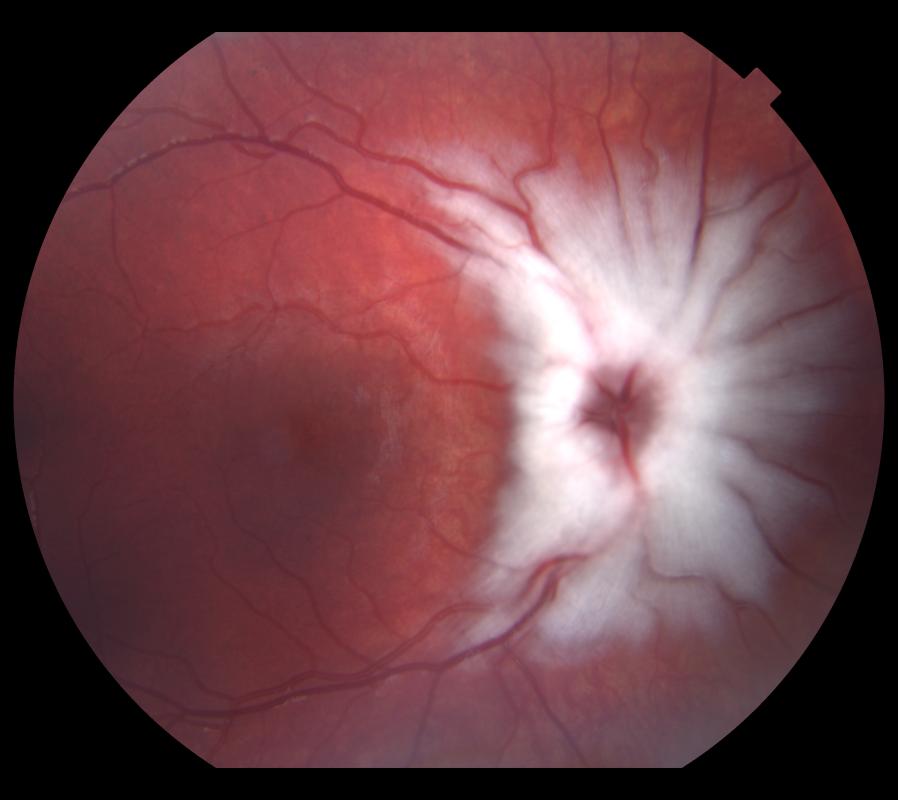 Myelinated retinal nerve fiber layers (MRNF) are retinal nerve fibers anterior to the lamina cribrosa that, unlike normal retinal nerve fibers, have a myelin sheath. Clinically, they appear to be gray-white well-demarcated patches with frayed borders on the anterior surface of the neurosensory retina.[1][2] MRNF are present in 0.57 to 1% of the population and can occur bilaterally in approximately 7% of affected patients.[3][4] Most patients with MRNF are asymptomatic; however, some patients have associated ocular findings including axial myopia, amblyopia, and strabismus.[3][4] Though rare, familial cases of MRNF have been reported both in isolation and in combination with ocular and systemic syndromes.[5] MRNF are typically present at birth and are static lesions, but a few cases of acquired and progressive lesions in both childhood and adulthood have been described. Disappearance of MRNF have also been reported after surgery and insults to the optic nerve.

The German pathologist Rudolf Virchow was the first to describe myelinated retinal nerve fibers, writing in 1856 that the “retina was white, very thick and wrinkled. Macula was normal and near the optic disc, though more deeply situated, were thick, opaque, chalk-white spots, which spread around the disc in the shape of a star, so that when I wanted to draw the line between the disc and macula on each side of the two had the same divergence. In the other eye, I found, without much surprise, in the same place, the ring around the disc with a width of 2–2, 5 mm, regressing towards the outside”.[1]

Axonal myelination in the human central nervous system is a complex, orderly process carried out by oligodendrocyte progenitor cells, which migrate under the influence of neuro-hormonal signals to generate oligodendrocytes that produce myelin. Retinal ganglion cell myelination proceeds from the lateral geniculate nucleus anteriorly toward the globe.[6] Myelination along the visual pathway is first seen in the eighth month of gestation, and typically reaches the posterior globe around the time of birth with virtually all fibers reaching complete myelination by age 7 months.[6] Normally, the myelination process stops at this level; some postulated explanations for this observation are the presence of the structure of the lamina cribrosa, the leakage of plasma proteins from the choroidal circulation inducing the differentiation of oligodendrocytes, and factors from type 1 astrocytes blocking oligodendrocyte migration.[7][8] Although the exact causes remain unknown, MRNF occur when the myelination process extends past the lamina cribrosa and is visible on fundus examination.

Histopathological analysis demonstrates that myelinated fibers are not confined to a patch or fascicle, and single myelinated fibers can be found in between fascicles of unmyelinated fibers.[7] Both myelinated and unmyelinated fibers within a region of MRNF have been shown to be larger in diameter than fibers within normal retina. Also, notably, a decreased population of retinal ganglion cells have been noted to be present within the MRNF along with decreased width of the underlying inner and outer plexiform layers of the retina.[7] There is a relative paucity of cell nuclei and no microscopic evidence of inflammation within the region of MRNF. Although some MRNF may appear macroscopically contiguous with the optic disc, one histological study demonstrated that the region of myelination was not contiguous with that of the optic nerve.[7] No abnormalities of the cribriform plate have been described in eyes with MRNF.

Genetic control of myelination of mature retinal ganglion cells is largely unknown and an active area of research.[9][10]

Familial cases of isolated MRNF have been reported, including a family with two generations of 10 cases and in a mother and daughter with bilateral MRNF.[5][11]

Familial cases associated with other disorders have also been described. An autosomal recessive syndrome consisting of growth retardation, alopecia, pseudoanodontia, and optic atrophy (GAPO syndrome) can also include MRNF, hypertelorism, and glaucoma.[12] A heritable syndrome of vitreoretinal degeneration, posterior subcapsular cataract, skeletal abnormalities, and MRNF has also been described.[13]

The majority of cases of MRNF are diagnosed incidentally in asymptomatic, healthy individuals by ophthalmoscopy. The appearance is typically one of a distinct peripapillary white striated patch with feathered borders approximately one disc diameter in size or larger (Figure 1).

Figure 1. Multicolor image of myelination of the RNFL. 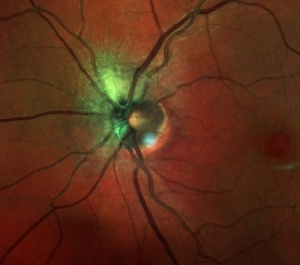 Conditions associated with myelination of the RNFL

MRNF are often isolated but may be associated with ipsilateral myopia, amblyopia, strabismus and other ocular conditions (Table 1). Strabismus was found in 66% with MRNF in one review.[15] Visual acuity is usually not affected; however, if a sufficient number of myelinated fibers are present, a relative scotoma may develop corresponding to the location of the MRNF. These scotomas are typically smaller than the size of the MRNF patch would suggest.[4][16]  Visual acuity and prognosis depend on the severity of ocular complications or associated syndromes.

Ocular associations with myelination of the RNFL

Systemic associations with myelination of the RNFL

Systemic syndromes that have been associated with MRNF include Turner syndrome,[36] epilepsy,[20] trisomy 21, and craniosynostosis.[4]

Conditions associated with acquired and progressive myelination of the RNFL

Conditions associated with loss of myelination of the RNFL

The disappearance of MRNF has also been reported and associated with several neurologic, inflammatory, and retinal diseases.  It is hypothesized that the disappearance of the MRNF signals pathologic degeneration of the retinal nerve axons. The neurological disease associations include pituitary adenoma, optic neuritis, acute optic neuropathy, and primary open angle glaucoma.[41][42][43][44][45] Apparent demyelination of a MRNF in a patient with Behçet disease after recurrent episodes of papillitis and vitritis has been described, as has a MRNF in a patient who underwent plaque radiotherapy for choroidal melanoma.[46][47] In addition, retinal conditions such as branch retinal artery occlusion, central retinal artery occlusion, diabetic retinopathy, and pars plana vitrectomy for epiretinal membrane have been associated with disappearance of MRNF.[48][49][50][51]

MRNF are typically benign but can be mistaken for other potentially serious conditions. A complete blood count may be helpful when considering a neoplastic infiltrate. The hyperreflectivity on OCT can mimic findings of retinal vascular occlusion or cotton wool spot, so ophthalmoscopy and fluorescein angiography can aid in distinguishing an embolic phenomenon. In young children, extensive MRNF may be mistaken for retinoblastoma, which must be distinguished by careful ophthalmoscopy (often under anesthesia) and possible additional imaging, such as ocular ultrasound, OCT, and FAF.[14] If gross visual defects are present, formal visual field testing is warranted to rule out a concomitant neuro-ophthalmologic issue, as visual defects in MRNF are usually mild.

Management of MRNF is focused on serial eye examinations assessing for and treating associated conditions. Myopia should be treated with refractive correction. If significant anisometropia is present, correction with glasses may not be tolerated secondary to aniseikonia, and contact lenses should be prescribed. Childhood amblyopia should be treated to optimize visual development.[3][49] Strabismus should be managed with the usual protocols, and patients often respond well to surgical realignment.

It is important to recognize the generally benign nature of MRNF to avoid superfluous medical testing. It is helpful to document a MRNF with imaging as certain conditions can be associated with the loss of myelination, as described above. Occasionally MRNF is referred for leukocoria. Careful observation of the feathering of the myelination along the nerve fiber layer can distinguish it from concerning diagnoses that can cause leukocoria, such as retinoblastoma.

The authors thank Penny Coppernoll-Blach and the UCSD Library staff for their help in facilitating the literature review necessary for this paper. Special thanks to Giulio Barteselli and Gabriel Balea for the ophthalmic photography presented here. We thank Christopher Rugaber, OD, Faculty of Optometry, Rangsit University, Pathum Thani,Thailand for his valuable suggestions to improve this wiki page.