Approximately 10% of patients with degenerative myopia will develop a choroidal neovascular membrane (CNVM) over a period of 10-11 years.[2] Around 30% of these patients also develop myopic CNVM in the fellow eye as well. Pathological myopia is the second most common cause of choroidal neovascularization (CNV) after age-related macular degeneration (AMD). It is important to differentiate between the two diseases as their management and outcomes differ.

Progressive axial elongation of the eyeball leads to chorioretinal stretching and subsequent thinning of the retina and choroid. Thinned out chorioretinal tissue is associated with poor blood circulation and may lead to CNV development by inducing vascular endothelial growth factor (VEGF) expression.

Symptoms: CNVM is a frequent cause of vision loss in patients with myopic degeneration. Patients may complain of metamorphosia, scotoma or decreased vision if CNVM involves the central macula, but they can also be asymptomatic if located outside the macular area. A history of metamorphopsia in myopic patients should arouse a suspicion of CNV.

Signs: Area of retinal atrophy appears as translucent defects with clearly discernible underlying choroidal vessels. Sometimes, bare sclera is visible in these areas. Lacquer cracks are seen as hyperfluorescent streaks with transmission defects in the early and transit phase of fluorescein angiography. The CNVM appears as greyish subretinal lesion (Fig. 1) with hyperpigmented borders. Other features seen in pathological myopia include: peripapillary crescent; attenuation and absence of retinal pigment epithelium; tilting and temporal flattening of the disc; posterior staphyloma; areas of chorioretinal atrophy; lacquer cracks seen as linear breaks in the Bruch’s membrane, most frequently seen in the posterior staphylomatous area; macular or foveal retinoschisis; Fuchs spots; and staightened vessels. 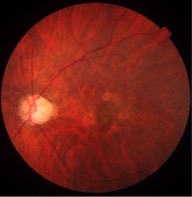 Fig 2: Myopic CNVM as seen on OCT imaging, showing no leak and thinned retina and choroid, with a prominent scleral thickness.

The progression of myopic CNV evolves through three main stages. In the initial phase, there is direct damage to the photoreceptors, causing central visual loss. Then, as the CNV regresses, a fibrous pigmented scar is formed. Finally, chorioretinal atrophy develops around the regressed CNV, which results in a poor long term visual outcome.

FFA: CNVM predominantly classic type (i.e. type II CNVM) are observed on FA. However, there is also a high prevalence of occult (Type 1) CNVM in pathological myopic eyes, especially in the Asian subcontinent. In the choroidal phase, more details of vessels are visible due to thinning of overlying RPE. They are seen as well-defined hyperfluorescence often with a hypofluorescent rim of pigmentation in the early phase with progressive leakage of dye in the late phase of the angiogram. The leakage seen in young myopes is milder as compared to the CNVM in AMD. Often a rim of subretinal hemorrhage is seen along the area of CNVM which causes blocked fluorescence.

SS-OCT – Swept source imaging is particularly useful for diagnosis and follow-up of myopic CNVM. Chorioretinal thinning along with subretinal membrane may be seen in SS-OCT in eyes with myopic CNVM (Fig 2, 3). Better delineation of choroid layers is also possible with SS-OCT. 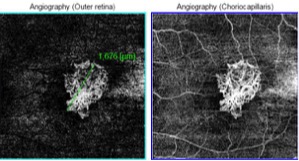 Fig 4: OCTA showing CNV as a typical lacy network of new vessels in the outer retina and choroid layer suggestive of Type 1 CNVM

OCT-A: OCT-A is a non-invasive tool that helps in the differentiation of the subretinal hemorrhage caused by both CNVM and new lacquer crack formation. Active CNV are characterized by a lacy wheel pattern, numerous tiny capillaries, a widely anastomosed network, and a perilesional hypointense halo while quiescent CNV are characterized by long filamentous linear large mature looking vessels, rare anastomosis and a "dead tree" appearance (Fig. 4). OCTA has been found to successfully in detecting up to 94.1% of myopic CNVs.

Since the introduction of anti-VEGF agents in the 2000s, the management of myopic CNVM has shifted from laser-based to pharmacotherapy-based.[3][4][5]

LASER: It was observed that the therapeutic effect of photocoagulation was lost with time and recurrence of new CNVM was observed at the margins of the photocoagulated areas. Heavy use of retinal laser may rarely lead to runoff phenomena where CNVM formation is actually induced, leading to subretinal exudation and neovascularization The photothermal disruption of the retina and the Bruch’s membrane and the formation of new lacquer line may be the predisposing factors for recurrence of CNV. The spread of the photocoagulation scar is more pronounced and rapid in myopic fundi.

PDT: The initial benefits of photodynamic therapy for myopia-associated CNVM were supported in the VIP study[6]. Although initial stability of visual acuity was seen in the initial period, worsening was seen with time.

ANTI-VEGF AGENTS: Today, intravitreal anti-vascular endothelial growth factor (anti-VEGF) is considered as mainstay of therapy in myopic CNVM.[7] The number of anti-VEGF injections required for myopic CNVM are generally lesser than those required for wet ARMD, although variable amongst individual patients.

Monthly follow up of the patients with monitoring of the visual acuity is important if patients have active or recently-active disease as the risk of recurrent CNVM and development of chorioretinal atrophy is high.