Pneumosinus dilatans (PSD) is a rare disorder of unknown etiology characterized by abnormal hyperaeration and enlargement of one or more paranasal sinuses.[1] In some cases, particularly those involving the sphenoid and ethmoid sinuses, an enlarged sinus may impinge on the optic nerve to cause a compressive optic neuropathy.[2] Patients with pneumosinus dilatans require thorough evaluation for associated conditions, which include meningiomas of the anterior skull base[3] or optic nerve sheath.[4] 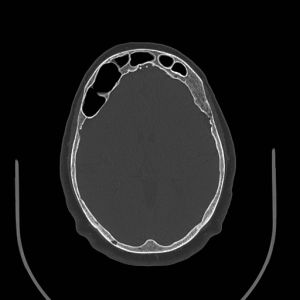 Pneumosinus dilatans (PSD) is defined as the hyperaeration and enlargement of a paranasal sinus such that it extends beyond the normal anatomic boundaries of its bone, without defects of the bony sinus walls.[5] PSD may be distinguished from hypersinus, in which the sinus is hyperaerated and enlarged but remains within the normal bony boundaries, and from pneumocele, in which there is also thinning of the bony sinus walls.[5]

The pathophysiology of PSD remains unclear, although a variety of theories have been suggested in the literature. These include a "ball-valve" obstruction of sinus outflow, in which an ostial polyp or other mucosal abnormality allows air in but not out of the sinus, forming a pressure gradient which leads to sinus enlargement.[1] This theory is supported by reports of mucosal changes at the sinus ostia in PSD,[7] although anatomically, it only explains PSD of the frontal sinuses.[1]

Another theory with limited support is that PSD is due to a primary fibro-osseous pathology.[1] Support for this mechanism includes reports of pneumosinus dilatans occurring in conjunction with fibrous dysplasia,[8][9] ossified fibroma[9] and congenital disorders of bony growth.[10] In addition, surgical resection of deformed bone appears to halt progression of PD.[1]

In addition, because a subset of PSD patients experience disease onset or rapid progression during puberty, it is thought that pathologic sinus enlargement may occur in response to pubertal hormonal changes in genetically susceptible individuals.[1] PSD has a bimodal age distribution, which some authors have suggested may be a reflection of two or more pathophysiologic processes predominating in different age groups, such as a hormonal process in younger patients and ball-valve obstruction in older patients.[1]

Finally, there is an association between PSD and both arachnoid cysts and meningiomas.[11] These include meningiomas of the anterior skull base[3][12] as well the optic nerve sheath.[4][13] The significance of this correlation is unclear, but it has been proposed that meningiomas might contribute to PSD pathogenesis via changes in intracranial pressure (due to mass effect or disruption of cerebral venous drainage) or from local release of growth factors triggering proliferation of bone.[11]

PSD is typically idiopathic, but may be associated with other conditions, such as anterior skull base or optic nerve sheath meningiomas, arachnoid cysts or fibro-osseous disorders. The finding of PSD radiographically should prompt evaluation for adjacent structural lesions on careful and directed neuroimaging (e.g., CT and MRI of brain and orbit with and without contrast).

PSD is rare and its incidence is unknown, with approximately 145 cases described in the literature.[6] It is most common in males with a mean age of onset of 33 years.[6] However, the disease shows a bimodal age distribution with peaks at ages 16 to 25 and 36 to 45 years, possibly suggesting different pathophysiology at different ages.[1]

PSD may be an asymptomatic radiographic finding. Often, patients with PSD of the frontal sinus present with solely cosmetic complaints, complaining of an enlarged, thickened, brow which they may attempt to conceal or camouflage with make up, hair, or clothing.[1]

Patients with PSD however may present with vision loss.[14] This is particularly common in PSD of the sphenoid or ethmoid sinuses[6] and may occur due to compressive optic neuropathy of the intracanalicular optic nerve.[15] However, optic neuropathy in PSD may also occur from accompanying meningiomas of the optic nerve sheath rather than from the sinus enlargement itself.[4] Some patients may complain of diplopia[16] or exopthalmos.[9][16] Other possible symptoms in PSD include headache, rhinosinusitis, or pain with altitude changes.[6]

Patients with PSD should undergo ophthalmologic examination to look for signs of optic neuropathy especially in sphenoid or ethmoid sinus related PSD.[6] In addition to an eye exam including visual acuity, pupillary reflexes and color vision, careful oculomotor and facial sensation exams are recommended.

Orbital and brain imaging with magnetic resonance imaging (MRI) with and without contrast should be considered in patients with PSD.[6] In addition, a computed tomography (CT) scan may be helpful for the bony and sinus anatomy. This is essential not only to characterize the sinuses but also to look closely for possible associated arachnoid cysts or meningiomas. The expected finding in PSD is a dilated, air-filled sinus extending beyond the normal boundaries of its bone.[5] 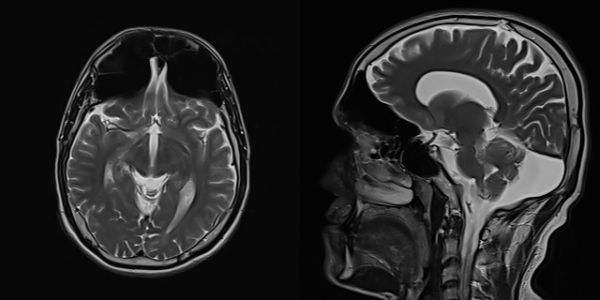 Figure 2. Magnetic resonance imaging (MRI; T2 sequence) of a patient with bilateral pneumosinus dilatans of the frontal sinuses. This is characterized by dilated, hyperaerated sinuses without thinning of the bony walls. Case courtesy of Dr Huda B. Gharbia, Radiopaedia.org. From the case rID: 74465. https://radiopaedia.org/cases/74465?lang=us

PSD is sometimes associated with endocrine abnormalities and consideration for baseline testing (e.g., serum electrolytes, calcium levels, thyroid studies, parathyroid hormone, testosterone, estrogen, and human growth hormone) should be made in consultation with the primary services and/or endocrinology as indicated.[1]

Although the radiographic findings of PSD are highly suggestive of the diagnosis, it may be difficult to determine if the PSD is idiopathic or associated with underlying structural lesion (e.g., meningioma) without careful and focused imaging (e.g., CT and MRI).[2] The differential diagnosis for a patient with PSD and signs of optic neuropathy is broad and includes related or unrelated inflammatory, infectious, vascular and neoplastic etiologies.

Asymptomatic patients diagnosed with PSD noted radiographically could be followed with regular imaging to assess for disease progression.[6] In those with cosmetic complaints, surgical recontouring of the affected sinus can be considered.[17] In cases of PSD of the frontal sinus, endoscopic evaluation of the nasofrontal duct should be considered to look for possible ball-valve obstructions.[1]

Optic neuropathy in PSD may be an indication for surgical optic nerve decompression, which may be performed via endonasal endoscopy or craniotomy.[15] Patients may also require surgical removal of associated meningiomas or other lesions.