Optic nerve head drusen (ONHD) are globular, often calcified, hyaline bodies located within the optic nerve head. The incidence of ONHD is 3.4 per 1000 in clinical studies; however, a higher rate of 10 to 20 per 1000 has been reported in autopsy studies. Pedigree studies suggest that drusen of the optic disc is a hereditary anomaly most compatible with the theory of irregular dominance with incomplete penetrance, based on an autosomal gene that has yet to be identified.

The etiology is unknown, but ultrastructually drusen appear to be degenerative axonal byproducts. It has been postulated that small scleral foramina impede normal axoplasmic flow leading to stasis. Abnormal axonal metabolism then leads to deposition of calcium crystals in mitochondria, which are extruded into the extracellular space. Continuous calcifications of these small microbodies coalesce to form groupings of drusen.

Optic disc drusen are often detected incidentally on fundoscopic examination. The optic nerve head is often elevated with blurred and/or irregular disc margins, giving the appearance of pseudopapilledema. Small buried drusen may cause only subtle elevation of the disc and obscuration of the physiologic cup, giving the appearance of a crowded disc. Larger, more diffuse drusen may appear as multilobular yellowish-white or pinkish nodules. These are best seen with retroillumination because drusen often glow with a semitranslucent appearance. Bilateral findings are seen in 75% of patients, and the excrescences are more commonly seen in the nasal half of the disc. Occasionally, hemorrhages or neovascularization appear in the optic disc and extend into the peripapillary region. Optic drusen have also been associated with angiod streaks. As many as 25% of patients with angiod streaks have clinical or echographic evidence of disc drusen.

Most patients are subjectively asymptomatic; however, some may complain of transient visual obscuration (TVO) or “dimness of vision.” The incidence of TVO has been reported as high as 8.6%, and is probably secondary to transient disc ischemia. Visual field defects have been reported in 71% of eyes with visible drusen and in 25% to 30% of those without visible drusen but with the appearance of pseudopapilledema. Defects may include enlargement of the blind spot and generalized constriction. In addition, nerve fiber bundle defects involving the inferior field can be encountered, and these defects do not necessarily correspond to the position of the drusen on the optic disc. Field loss may be related to direct compression of the optic nerve and its vascular supply, predisposing the nerve to disc hemorrhages and ischemic optic neuropathy. Once ONHD become clinically visible, thinning of the nerve fiber layer (NFL) can be observed through several modalities. The level of NFL loss detected is correlated with the degree of ONHD visible on examination and often precedes any visual field loss. Deep or buried drusen tend not to demonstrate NFL thinning; however, calcification can be detected with B-scan ultrasound or computed tomography. Unfortunately, ONHD enlarge with age, and both thinning of the NFL and field loss are slowly progressive over time.

Ancillary testing may be useful in differentiating drusen from papilledema.

B-scan ultrasound can reveal an ovoid echogenic lesion at the junction of the retina and optic nerve. The degree of acoustic shadowing is proportional to the size of the echogenic focus. With papilledema, the intraorbital portion of the optic nerve is typically widened and will not decrease in width with prolonged lateral gaze (30 degree test). Drusen do not produce widening of the intraorbital nerve. This imaging method is advantageous because it can scan the entire area of the optic disc to show posterior borders of deep, calcified drusen. However, this method has poor resolution of the drusen and can miss uncalcified, buried drusen.

Red-free photography may reveal autofluorescence of the drusen without the administration of fluorescein. Alterations in the peripapillary retinal nerve fiber layer may include varying degrees of regional thinning, especially nasally, or diffuse loss of NFL. Deep or buried ONHD tend not to show any NFL changes on red-free photography, possibly due to the attenuation from the overlying tissue. 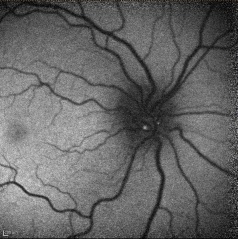 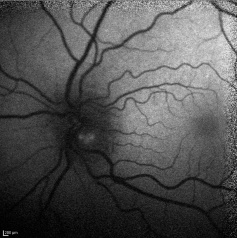 Often an incidental finding, intraorbital calcifications at the level of the optic nerve head may be revealed on high-resolution head or orbital scans. These are especially well visualized with bone windows. Similar to the B-scan ultrasonography, this method can only detect the calcified drusen.

Optic Coherence Tomography (OCT) is a noninvasive imaging tool that that is now regarded as the gold standard for diagnosing both buried and superficial drusen because of its ability to image deeper layers of the retina and optic nerve head. Circular scans around the optic nerve reveal varying levels of NFL loss. The amount of thinning appears to be proportional to clinically visible excrescences of the optic disc. Localized thinning is seen in quadrants in which drusen are most aggregated. In eyes with generalized dense drusen of the entire disc, diffuse NFL loss is observed. A radial scan of the optic nerve performed through the drusen can illustrate elevation within the nerve head and obscuration of the physiologic cup. 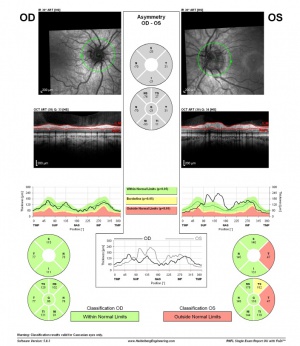 OCT of ON drusen OU

Optic drusen are collections of two to three small nodules, up to 40 or 50 colloid bodies ranging from 5 to 1000 microns in diameter. Histologically, they consist of needle-like calcium depositions in the mitochondria of axons, disruption of the plasmalemma, leakage of axoplasmic components into the interstitial space, and heavy deposition of calcium crystal in extracellular mitochondria.

No treatment is proven to alter the clinical course of ONHD, but visual impairment is usually mild. Several options have been investigated to manage the ONHD including lowering intraocular pressure and vasoactive therapy. It is thought that lowering the intraocular pressure can serve as a neuroprotective treatment, however it is still uncertain whether or not an elevated intraocular pressure is damaging to the optic disc in ONHD. Vasoactive therapy, such as Pentoxifylline, has been used for ONHD, however its role in treating this disease still requires a more thorough investigation. In rare cases, vascular complications such as flame hemorrhage, nonarteritic anterior ischemic optic neuropathy, or peripapillary subretinal neovascularization can occur.