Pilomatrixoma (pimatricoma) is a firm subcutaneous nodule often found on the head and neck of children.

A pilomatrixoma is small, firm subcutaneous mass found under the skin. It most commonly presents as a single lump found on the face, scalp, eyelids, eyebrows, neck, or arms, but in some instances can be multiple in nature.

The majority of cases of pilomatrixoma occur in children younger than 10, but can also present in older children and young adults.

Females are two times more likely as males to have a pilomatrixoma.

Also known as benign calcifying epithelioma of Malherbe, this is a rare benign tumor that originates from the hair root matrix. It was first described by Malherbe and Chenantais in 1880.

Pilomatrixomas have been found to be familial in some cases, or seen in association with inherited genetic syndromes. A female preponderance has been reported.

There is no primary prevention.

Diagnosis is often difficult to make clinically, and therefore can only be definitively established after histopathological examination of the lesion after surgical removal.

Usually presents as a slowly enlarging mass under the skin, often less than 3cm in diameter. There is typically no associated pain, overlying skin inflammation, or change in skin color. Less commonly, the lesion may become inflamed or infected, and cause discomfort at that time.

A few case reports have described lesions that presented as bruising after trauma, with some authors suggesting this could be a more aggressive variant of the lesion. In contrast, a survey by Orlando et al, described 150 cases of pilomatrixoma at a pediatric hospital that had no preceding history of trauma or inflammation.

Subcutaneous nodule often less than 3cm in diameter under the skin in typical locations in the eyelids, eyebrows, scalp, labella, or neck. Other locations also seen less commonly.

Nodule is round, smooth, very firm, and freely mobile from underlying bone. The overlying skin may be thin and adherent to the anterior face of the lesion.

Some reports have described red-blue or bluish-purple discoloration of the skin to be more typical of pilomatrixoma that could differentiate it from inclusion and dermoid cysts. Inclusion cysts tend to have a diffuse yellow color due to keratin within the cyst, and are softer and more fluctuant.

Rhabdomyosarcoma can rarely present as an eyelid mass, but typically has erythema of the skin and is an extension of deeper orbital tissue involvement.

Pathologic evaluation of the surgical specimen is necessary to make the definitive diagnosis, although clinical findings are usually typical for pilomatrixoma.

Blood tests are not indicated. Imaging such as Xray, CT or MRI are often not performed as the clinical examination is often suggestive of the lesion prior to surgery.

Histopathology demonstrates a pseudoencapsulated mass with eosinophilic acellular material with prominent ghost cells. Small foreign body giant cell granulomas and calcification can be present within the lesion. Nests of basaloid cells with little cytoplasm comprise the periphery of the lesion, and form keratinous material. 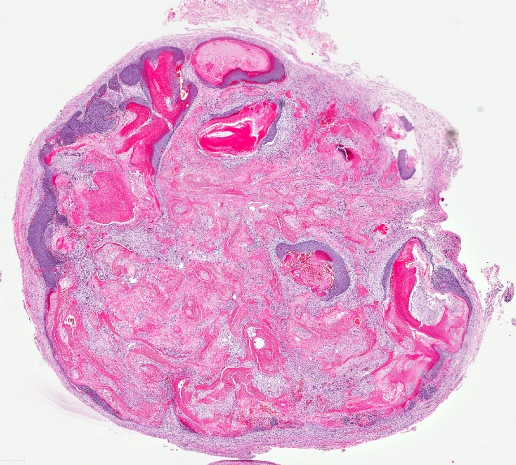 Observation is reasonable unless the lesion enlarges and becomes symptomatic. A pilomatrixoma will not resolve spontaneously or involute; therefore, surgical excision is the treatment of choice for symptomatic or progressively enlarging lesions.

Surgery is the treatment for complete removal of the lesion. This is usually curative and also allows for pathologic diagnosis of the mass. In the eyelid or brow region, the lesion can often be removed via an eyelid crease incision.

The procedure is often performed as a day surgery, with the child going home after surgery. The lesion is removed in its entirety and sent in formalin for histopathologic evaluation.

Prognosis after surgical removal is excellent, but reports have shown a very low recurrence rate in some cases. Patients and their family should be aware that any new lesions should be evaluated appropriately.