The pinhole affect is based on the stenopeic principle, which allows small central rays to enter the eye and eliminates diverging rays, thus reducing the circle of blur on the retina[1]. As a result, the depth of focus is increased, providing patients with good distance and near vision. This concept has been routinely used in ophthalmology in the form of pinhole occluders and glasses and even through the surgical constriction of the iris, however this concept has recently been introduced to the IOL plane. Although viewing through a small aperture increases depth of focus, it comes with the disadvantage of decreased brightness, decreased visual field and decreased optimal visual acuity,[2][3] as depicted in the chart below[4] . 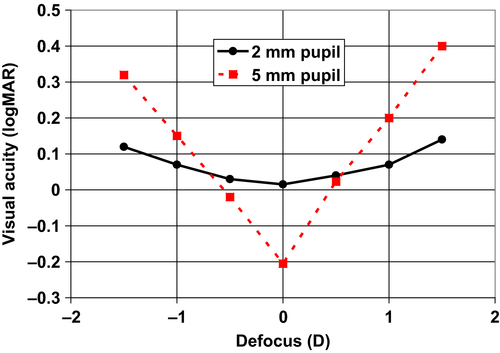 Caption: Visual Acuity as compared with pupil size after correction of aberrations in 13 patients[4]

The IC-8 monfocal IOL uses similar principles to the Kamra corneal inlay[5]. The lens has been approved for use outside of the US in 2014 and currently pending completion of an FDA trial[6]. The IOL is intended for monocular placement in the non-dominant eye, in an effort to provide presbyopic correction while maintains good range of distance vision.

The IOL is a foldable single piece, hydrophobic, Acrylic lens that has an embedded annular ring composed of  polyvinylidene fluoride and carbon nanoparticles. It is 5um thick and the aperture measures 1.36mm, while the outer diameter measures 3.2mm, an overal 15% decrease in size from the Kamra inlay to adjust for a more posterior position. 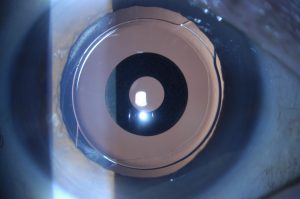 The Xtrafocus IOL is a small-aperture sulcus IOL designed for implantation as a piggy back lens for patients with a lens already implanted in the capsular bag. This lens is designed to reduce irregular astigmatism or light sensitivity in patients who have undergone PKP or who have other corneal irregularities. The IOL was given a CE mark in 2016 and is currently pending an FDA trial by Morcher. Dr. Trindade, who holds a patent for the design, implanted the IOL in a patient with Urrets-Zavala’s syndrome, suffering from intractable light sensitivity with marked improvement[7].

The IOL is composed of a foldable acrylic infra-red transparent material but otherwise appears black, opaque. The IOL measures 14mm in diameter with a 6mm optic and a 1.3mm central aperture. The lens has a concave-convex design to prevent contact with the lens already implanted in the capsular bag. It has soft, thin (250um) angulated haptics at 14 degrees that help to prevent uveitis-glaucoma-hyphema syndrome. It is placed in the ciliary sulcus in a piggy-back fashion in pseudophakic eyes. Funduscopic imaging can be obtained with an infra-red OCT imaging system. 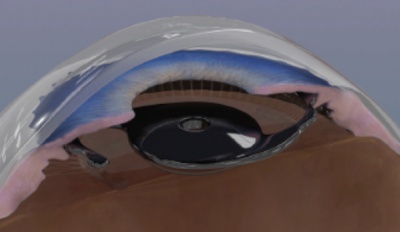 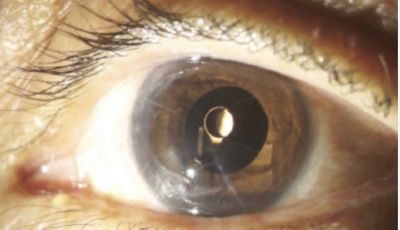 The IC-8 IOL is marketed by AcuFocus to provide 3D of functional range of vision when placed at a target of -0.75D in the non-dominant eye with an accompanying monofocal IOL in the dominant eye, targeted for emmetropia[8].

Given the IOL is placed closer to the eye’s nodal point, there are less problems noted with slight decentration from the visual axis as compared to the corneal inlays. The small aperture helps to reduce coma as peripheral light rays are blocked.

A study comprised of 21 patients with high irregular astigmatism from RK, KCN and PKP showed the median CDVA improved from 20/200 to 20/50 following IOL implantation[15].

The IC-8 IOL is for patients undergoing cataract surgery who want a good range of vision without spectacle dependence.

Patients who are good candidates for an IC-8 IOL include:

Patients who are not good candidates include:

Patients have to be counseled regarding decreased brightness and possible need for glasses during low light conditions[16].

The Xtrafocus IOL is currently intended for patients with moderate-severe astigmatism resulting from KCN, trauma, PKP or post-RK. Due to its small aperture and opaque nature, peripheral vision may be significantly limited.

Although only anecdotal reports are available, retinal surgery following implantation of an intraocular lens with a pinhole optic seems to be possible without significant obstacle[17].