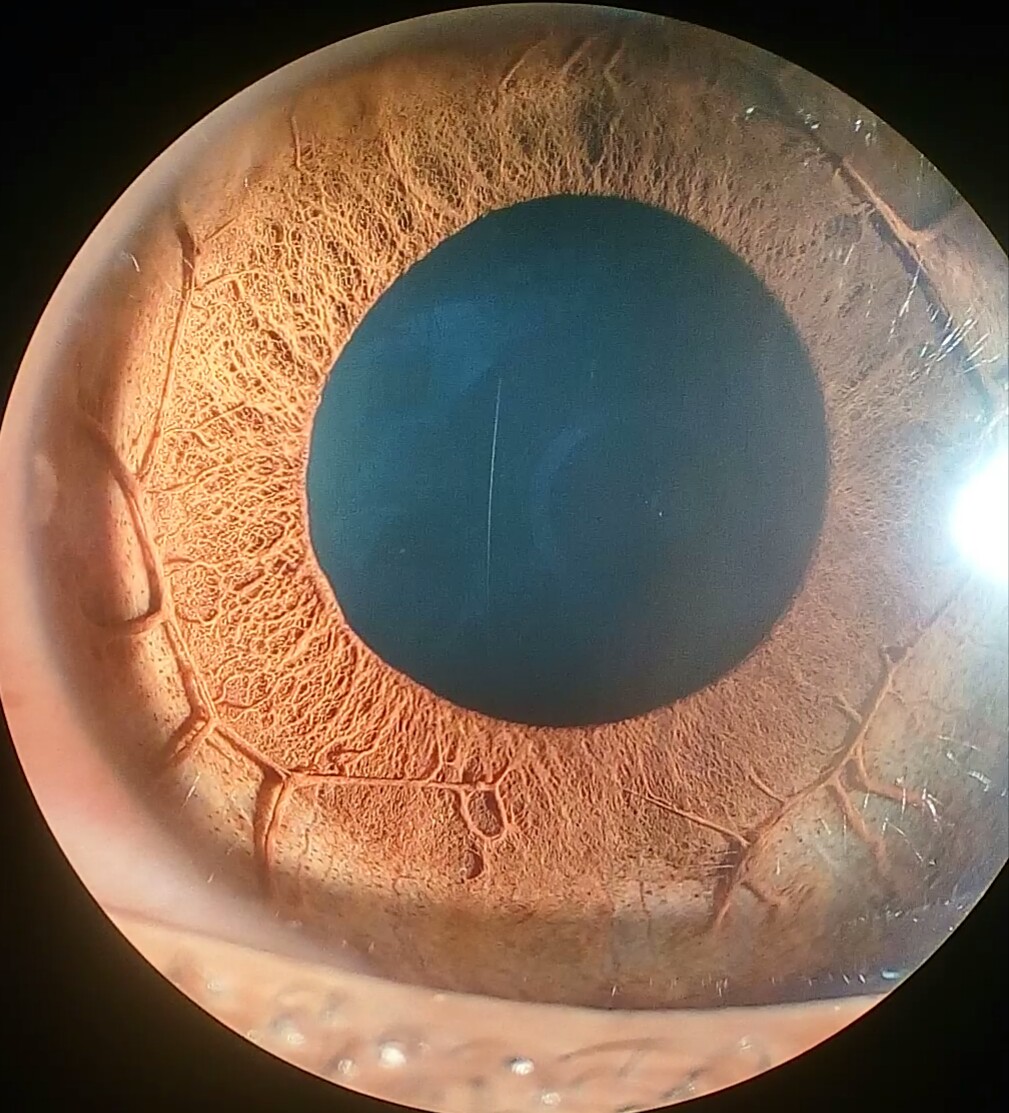 Plateau iris is a type of narrow angle more commonly seen in younger adults that can lead to chronic angle closure glaucoma. Plateau iris refers to the anatomical configuration of the iris. Plateau iris is caused by a narrowing of the anterior chamber angle due to insertion of the iris anteriorly on the ciliary body or displacement of the ciliary body anteriorly, which in turn alters the position of the peripheral iris in relation to the trabecular meshwork (i.e. placing them in apposition). Plateau iris syndrome is defined as a persistently narrow angle capable of closure in spite of a patent iridotomy. Plateau iris is an ocular condition that requires appropriate diagnosis and treatment in order to prevent vision loss. Early recognition and intervention are key components to a good overall prognosis in this patient population. 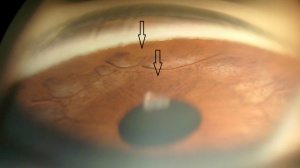 The term plateau iris was first used in 1958 in describing the configuration of the iris in a patient[1]. In 1977, a study of 8 patients who presented with angle closure glaucoma after an iridotomy helped clarify the condition. In order to avoid confusion, the terms plateau iris configuration (PIC) and plateau iris syndrome (PIS) were distinguished[2]. PIC is a preoperative condition in which appositional or narrow angle is confirmed by gonioscopy; however, the anterior chamber depth is normal and the iris is flat. In PIC, the iris root angulates forward peripherally and then centrally in a planar fashion[3]. PIS, on the other hand, is a postoperative condition in which a patent iridotomy has eliminated the relative pupillary block that is normally seen in an appositional angle or primary angle-closure glaucoma, but evidence of angle-closure persists without shallowing of the anterior chamber (Figure 1)[1]. 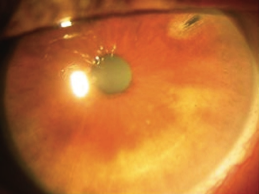 PIS most commonly occurs in the early postoperative period, however it can also occur years after surgery.

Plateau iris configuration is characterized by an appositional angle with a flat iris configuration, in contrast to an anterior bowing of the iris seen in a “typical” angle closure glaucoma in which there is a more crowded anterior chamber due to a hyperopic/short eye. Classically with PIC, the iris configuration is planar and the depth of the anterior chamber is normal[3] (Figure 2a).In patients with PIC, the iris root is often short and inserted anteriorly on the ciliary face, causing a shallow and narrow angle[3] (Figure 2b). With plateau iris configuration, there is a relative pupil block mechanism. Plateau iris syndrome is due to an abnormal anterior position of the ciliary body. This anterior ciliary body displacement in turn alters the position of the peripheral iris in relation to the trabecular meshwork resulting in obstruction to aqueous outflow. Therefore, the etiology of plateau iris syndrome is distinct from that of most cases of angle closure glaucoma, which is usually caused by a relative pupillary block. PIS may be triggered by spontaneous pupillary dilation (for example, in conditions of darkness), or in response to mydriatic agents.

Plateau iris syndrome is well recognized as a common etiology of angle closure in relatively young patients[1][3] The prevalence of PIS was found to be approximately 32% by UBM after LPI in a Singapore study in eyes at risk for primary angle closure in individual greater than 50 years[5].  In another recent chart review, the prevalence of PIS was 54% in individuals less than 60 years old with recurrent symptoms of angle closure in spite of peripheral iridotomy or iridectomy[6]. Patients with PIS tend to be young, female, and less hyperopic than those with angle closure glaucoma caused by relative pupillary block.  In a large retrospective analysis by Ritch et al, the mean age of diagnosis for patients with PIS was thirty-five[3].  To date, however, the youngest reported case of PIS occurred in a 12 year old boy who presented with transient eye discomfort while watching television in the dark[7]. The Caucasian population appears to be at increased risk[6]. Very often, a family history of angle-closure glaucoma is present in patients with PIS, suggesting a genetic component to the condition. The inheritance is typically autosomal dominant pattern with incomplete penetrance[8]. Other potential causes of angle closure in young patients include iridociliary cysts, lens-induced angle closure, nanophthalmos, retinopathy of prematurity, uveitis (posterior synechiae), lens subluxation, and a variety of other rare clinical conditions[3]. PIS, however, appears to be the most common etiology in this population.

Aqueous humor flows from the posterior chamber through the pupil, and drains via the trabecular meshwork into the angle of the anterior chamber[9] (Figure 3). 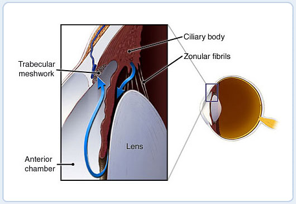 If the flow is impeded in any way, intraocular pressure will rise. In a patient with plateau iris configuration, the iris root is short and the ciliary body processes may be larger and more anteriorly positioned than normal. This results in a mechanical repositioning of the peripheral iris (i.e. “bunching” or focal aggregation of the peripheral iris), thereby crowding the angle and obstructing flow through the trabecular meshwork[7]. In some cases, the iris root is inserted anteriorly on the ciliary face, which can further reduce the anterior chamber angle[10]. In either case, this anatomic abnormality obstructs the flow of aqueous fluid through the trabecular meshwork, causing an increase in intraocular pressure and angle-closure glaucoma.

Plateau iris configuration/syndrome are anatomical abnormalities that should be kept in the differential of patients with narrow angles or appositional angle closure, as the condition has the potential to cause permanent vision loss[11]. The condition occurs in a relatively young patient population, so screening for plateau iris in young patients with symptoms of angle closure should not be delayed. Furthermore, since there is likely a hereditary component, it is suggested that all first-degree family members of an individual with PIC/PIS be screened[12].

The diagnosis of plateau iris is most commonly made in asymptomatic patients on routine examination of the eye. Patients with plateau iris tend to be female, in their 30-50s, hyperopic, and often have a family history of angle-closure glaucoma. The condition should be suspected any time angle closure occurs in a younger patient, especially when the angle remains occludable after iridotomy. A symptomatic patient may initially present with headaches, eye pain, nausea, and vomiting – symptoms that are indicative of an acute rise in intraocular pressure. The patient may also complain of seeing halos around lights or blurry vision[13]. Symptoms are more likely to occur after dilation of the eye. A patient presenting with such symptoms requires an emergent ocular examination to investigate the possibility of acute angle closure.

Slit lamp evaluation of patients with plateau iris configuration usually shows a normal anterior chamber depth and a flat iris plane[1][2]. A “double hump sign” on indentation gonioscopy is characteristically seen in this condition[3]. The peripheral “hump” on the iris is caused by the ciliary body propping up the iris root, whereas central “hump” represents the central third of the iris resting over the surface of the lens[12]. Though plateau iris is believed to have a deep central chamber unlike a typical narrow angled individual who is hyperopic, UBM studies found plateau iris to have a more shallow anterior chamber[14].

Ultrasound biomicroscopy (UBM) plays a fundamental role in the diagnosis of PIC/PIS, as this modality can definitely confirm the anatomic abnormalities of the ciliary body. In patients with PIC or PIS, UBM will show anteriorly situated ciliary processes and in some cases a shortened, thickened iris root that is inserted in a more anterior position in the ciliary body[1].

Other possible diagnoses include[3]:

The primary treatment modality for patients with plateau iris configuration is surgical. Many clinicians, however, will first treat with miotic agents such as pilocarpine to prevent pupillary dilation leading up to surgery[1][2][6][13]. Low dose or dilute pilocarpine can produce thinning of the iris and facilitate opening of the angle by pulling the iris away from the trabecular meshwork.[1][13].

Since patients with PIC often have an element of pupillary block, peripheral laser iridotomy is the first surgical intervention performed[5][10]. A peripheral iridotomy, however, does not change the anatomy of the anterior chamber, so some patients with PIC may still experience a glaucoma crisis (the patient should now be considered PIS, not PIC)[1]. This situation most often occurs in patients with incomplete PIS who develop peripheral anterior synechiae and synechial angle closure[10]. An acute glaucoma crisis after peripheral iridotomy is diagnostic for PIS. This acute crisis usually happens in the post-procedure period, but may also occur years later. Therefore, patients should undergo regular evaluation by an ophthalmologist after the procedure.

If a peripheral iridotomy is unsuccessful in controlling the intraocular pressure (i.e. confirmed PIS) the treatment of choice is argon laser peripheral iridoplasty (ALPI). This procedure is highly effective in eliminating appositional residual closure caused by PIS[1]. In ALPI, laser burns are placed on the surface of the peripheral iris, which contracts the peripheral iris root and physically widens the chamber angle[3][6][15]. Long duration, low-power, large spot size burns are essential for a successful outcome[13]. While ALPI is a highly effective treatment for PIS, a subset of the population may develop re-closure of the angle[10]. The angle in these patients is readily reopened with repeat ALPI. Of note, a condition called Urrets-Zavalia syndrome is a rare complication of ALPI characterized by mydriasis that is unresponsive to pilocarpine therapy[16]. Most cases of Urrets-Zavalia syndrome resolve spontaneous within 1 year.

If peripheral iridotomy, ALPI, and additional miotic agents fail to adequately control intraocular pressure, then surgical procedures such as trabeculectomy, drainage implantation, or goniosynechialysis should be considered[17]. Given the relatively young age of this patient population, it should be noted that trabeculectomy can accelerate the formation of cataracts[17]. Of course, regular follow up with ophthalmology remains crucial at this point as well.

The prognosis for patients with PIC/PIS is generally good, provided the condition is recognized before vision loss occurs. Regular follow up with serial gonioscopy ensures that the proper interventions and treatment modalities are initiated when necessary because angle-closure may develop years after successful iridotomy or iridoplasty. Routine screening for the developement of glaucoma should also be performed.