Pupillography is a formal method of recording and measuring reactions of the pupil often by using an infrared video camera and using computer software to analyze the images (Video 1). The pupillary afferent pathway starts at the retina, travels through the optic nerve, then goes through the optic chiasm and optic tract to reach the pretectal nucleus, where it communicates anteriorly with the Edinger Westphal nucleus that is in charge of the efferent pupillary pathway (Figure 1). This pupil pathway (afferent and efferent) can be affected by a diverse set of stimuli including changes in retinal luminance, sudden changes in stimulus motion, and emotional and cognitive factors. Thus, pupillography is a useful tool for studying, identifying, and treating the underlying stimuli and causes of certain pupillary reactions. It is also useful for obtaining exact measurements of the pupil during preparation for certain ophthalmic procedures. [1] [2] [3] [4] [5] 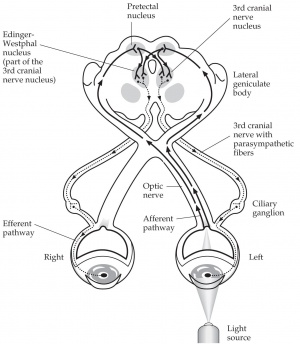 Figure 1. Pupillary afferent and efferent pathways. The solid line represents the afferent pupillary pathway and the dotted line represents the efferent pupillary pathway. Light stimulating the left retina generates impulses that travel down the left optic nerve and divide at the optic chiasm, where some impulses continue down the left optic tract and others cross over to the right optic tract. These impulses stimulate the pretectal nuclei which then  stimulate both Edinger Westphal nuclei of CN III.  CN III acts on the iris sphincter muscles, causing both pupils to contract. Because of this double decussation, first in the chiasm and then in the pretectal and Edinger-Westphal nuclei, the direct pupil response in the left eye is equivalent to the indirect consensual response in the right eye. (Image obtained from http://www.aao.org).

Pupillography might be used to give an approximation of visual acuity in settings where patients cannot (e.g., nonverbal) or will not (e.g., nonorganic) provide the information using subjective assessments.[6] While the classic pupillary light reflex is luminance-driven, a secondary reflex involving pupillary constriction to isoluminous stimuli (e.g. chromatic and achromatic gratings, coherent motion set) has also been documented. Both reflexes are mediated by the same retino-cortical pathway, the afferent arm of which is also involved in visual perception. However, the secondary reflex has a longer latency, and thus may have potential use as an objective indicator of visual acuity. In fact, it has already been shown to correlate with measurements of visual acuity but is currently limited to use in research settings due to the small amplitude of pupillary responses and the need for repeated measurements

Furthermore, pupillography can be an essential part of the refractive surgery evaluation and planning process. For refractive surgery, measuring the pupil size in low light conditions helps determine the most accurate ablation zone. If the ablation zone is smaller than the dilated pupil, then patients can develop halos that disrupt their nighttime vision.[10] [11]

Pupil size measurement is also important during pre-operative evaluation of IOL placement, especially for premium IOLs. IOL selection is a complicated process that involves a variety of factors, including the patient's stated preferences about the level of vision he or she values most (e.g. distance, intermediate or near), occupation, lifestyle, and frequency of nighttime driving, and pupillography can help optimize this decision.[12] [13] [14] [15] [16] [17]

Additionally, the measurement of pupil diameter in psychiatric disorders provides an estimate of the intensity of mental activity and changes in mental states. In fact, pupil dilation correlates with arousal so consistently that pupillometry has been used to investigate a wide range of neuropsychiatric phenomena.[8] A tight correlation between the activity of the locus coeruleus and pupillary dilation has also been evidenced, further suggesting a link between mental activity and pupillary responses. Although cognitive and emotional events can affect  pupil constriction and dilation,  such events occur on a smaller scale than the light reflex, causing changes generally less than half a millimeter. By controlling for other factors that might affect pupil size, like brightness, color, and distance, scientists can use pupil movements as a proxy for other processes, like mental strain. These movements may prove to be  sensitive indicators for neurodegenerative disease (e.g., Alzheimer's and Parkinson's disease), autism, or even opioid and alcohol abuse.[18] [19] [20] [21] [22] [23] [24] [25]

Pupillography has also been used to test and study the autonomic effects of certain drugs. For instance, pupillography can demonstrate whether a drug has cholinergic or adrenergic effects based on the reaction size of the pupil. [8] Pupillography can also be used to study sedative effects of drugs since sleepiness can be measured by the degree of spontaneous and involuntary fluctuations in pupil size. [33]

Measurement of the pupil size and function may be challenging secondary to the phenomenon of pupillary hippus or noise. The pupil is never entirely at rest but rather has normal, small continuous oscillations (±0.5mm). Therefore, when trying to measure the pupil, a single “snapshot” estimate is not a reliable predictor of the true mean size because the clinician might catch the pupil at the maximum or minimum. Consequently, most current pupillographic devices involve recording the pupil with a specialized infrared video camera, whose video frames are then transferred to a personalized computer that uses imaging processing software (discussed in the next section) to calculate pupil size in each individual frame.[8][34] Commercially available devices differ significantly from each other because they are usually designed for a specific task. This means that some instruments are optimized for high spatial or temporal resolution, while others are optimized for stable, long-term recordings. There are also different systems for monocular (sampling frequency of 5-25 Hz) versus binocular (sampling frequency of 25-60 Hz) recording, as well as different levels of light stimulus.[8][34]

In order to track the size of the pupil, a segmentation algorithm can be used. The simplest of these is the well-known Hough Transform method (Figure 2). This method will work in many cases because the pupil is usually in the shape of a circle, but it will not provide proper accuracy in all conditions, such as when the pupil is misplaced or abnormally shaped. Pupil movements can also affect the accuracy of this method, as they can make the pupil appear more elliptical (rather than circular) from the fixed perspective of the camera. Therefore, the Hough Transform cannot alone provide the required accuracy.[35]

More intelligent pattern recognition models can be used for higher accuracy. Although these models need training data and experts to train them, they can eventually adapt themselves to detect the desired item (such as the pupil) with very high accuracy regardless of its exact shape. Therefore, these models can accurately detect even misplaced or abnormally shaped pupils and their positions.

To compensate for eye movement, we can multiply the measured pupil size by another scaling factor. Because the pupil is normally located in the center of the eye, we can easily determine the location of the pupil with respect to the camera. This allows us to calculate the appropriate scaling factor with mathematical expressions.[36] 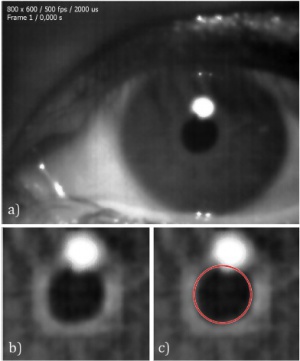