The causes are provided in the figure. 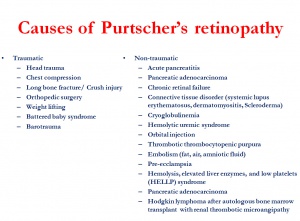 The most important clinical symptom of Purtscher retinopathy is painless diminished visual acuity. In cases where there is a causal link with a traumatic event, visual disturbance may appear synchronous with that event or be delayed up to 24-48h[22]. Bilateral disease is generally present in 60% of cases and in virtually all cases if precipitated by acute pancreatitis[23]. However, there is no apparent association between the extent of retinal involvement and the unilateral or bilateral presentation of the disease[23]. Diminished visual acuity is typically accompanied by visual field loss, either in the form of central, paracentral or arcuate scotomata, while peripheral visual field is usually preserved[22].

Miguel et al[21] reported that the most frequently encountered fundoscopic signs were cotton-wool spots (seen in 93% of cases), followed by retinal hemorrhages (65%) and Purtscher flecken (63%). Purtscher flecken are pathognomonic findings and can be described as polygonal areas of retinal whitening with a clear demarcating line (within 50µm) between the affected retina and contiguous normal retinal vessels. A typical photo can be found at http://www.healio.com/ophthalmology/retina-vitreous/news/print/ocular-surgery-news/%7B06f12fe0-1b0a-4326-baf6-9f59b8ee8e71%7D/man-referred-for-sudden-onset-decline-in-vision-in-left-eye

The sparing of the perivascular retina from the whitening is very typical. However, it may be present in only 50% of patients[23]. The lesions may be multiple, discrete, and of variable size, and usually affect the superficial inner aspect of the retina. Lesion distribution is typically confined to the peripapillary retina and macular area, due to the fact that arterioles and capillaries in this region are more susceptible to embolic occlusion as a result of fewer arteriolar feeders and fewer anastomoses[22][24]. In Purtscher retinopathy, a pseudo-cherry spot may appear on funduscopic examination. This occurs when the retinal whitening surrounds the fovea, and must be differentiated from a "true" cherry red spot in central retinal artery occlusion.

Miguel et al reported that on 2 months follow-up, a normalization of the retinal appearance on fundoscopic examination was present in 40% of patients; optic atrophy occurred in 64%, mottling of the retinal pigment epithelium in 23%, retinal thinning in 14%, and narrowing of retinal arteries in 4%[21].

The retina has been divided into 3 zones centered around the fovea.[23] Zone A is an area with radius of 4 disc diameters. Zone B extends outside zone A to the equator. Zone C is anterior to the zone B and extends to ora serrata. Two-thirds of cases involve zone A alone. Zone C is rarely affected.

Diagnostic criteria have been proposed. This includes two important groups: first, the existence of an associated contributing illness or event that may result in Purtscher retinopathy (acute pancreatitis, renal failure, chest compression, long bone fracture, etc); secondly, the appearance of lesions on fundoscopic examination. The first criteria were proposed by Agrawal et al[23]:

More recently, in a systematic review, updated diagnostic criteria for Purtscher retinopathy have been proposed by Miguel et al[21]. Diagnosis is made in a patient that matches at least three of five criteria:

Important entities in the differential diagnosis include branch or central retinal artery occlusion and commotio retinae. Clinical examination, history, and diagnostic testing are useful in identifying the diagnosis.

In the acute phase, OCT may show a hyperreflectivity in the inner retinal layers corresponding to cotton-wool spots and a variable degree of macular edema. In late/chronic cases, Purtscher retinopathy may lead to a variable degree of outer retinal atrophy and photoreceptor loss, also noted on OCT. This has been considered of prognostic significance[25] [26] [27].

Paracentral acute middle maculopathy (PAMM) has been reported to be seen in Purtscher's retinopathy (http://dx.doi.org/10.1016/j.ajo.2015.04.004). On spectral-domain OCT, PAMM is characterized by hyperreflectivity at the inner nuclear layer, signifying involvement of deep and intermediate retinal capillary plexuses.

Lesions visible in FA generally can include blocked choroidal fluorescence (either due to retinal whitening or blood), occluded retinal arterioles, capillary non-perfusion, and late leakage from the retinal vessels in areas of ischemia and optic disc edema. Early acute changes (within 2 hours) show slight early masking of choroidal fluorescence in the affected area with subsequent arteriolar leakage[28]. In this area, choroidal hypofluorescence may persist up to five months after diagnosis[29]. Leakage from the optic nerve has also been reported[30]. Interestingly, areas of hypofluorescence have also been noted on indocyanine green angiography, implying that the choroidal vasculature is also involved in the pathogenesis[29].

Electroretinography (ERG) findings reflect the current understanding of the pathogenesis of this disease. Multi-focal ERG shows a depression in both A-waves and B-waves in the affected retina, lending evidence that both the outer and inner retina are involved[31].

Pathogenesis of Purtscher retinopathy has been a field of intense research and controversy spanning decades. In his original report, Purtscher stated that the retinal lesions were a result of extravasation of lymphatic material from the retinal vessels after a sudden increase in intracranial pressure.

Currently, the most accepted theory centers on microembolization of retinal vasculature, resulting in arteriolar precapillary occlusion and microvascular infarct of retinal nerve fiber layer (resulting in cotton-wool spots)[22][32]. Embolization can occur from a fat emboli (as described in long bone fractures) or as a result of disseminated pancreatic proteases in the systemic circulation, as occurs in acute pancreatitis. It has also been proposed that microembolization derives from leukoembolization by leukocytary aggregation. C5 and complement activation would play a crucial role with secondary lymph extravasation[33] [34]. In addition, in cases of chest compression (or weight-lifting or battered baby syndrome), impaired venous return and acute expansion of retinal veins may produce the clinical fundoscopic appearance of Purtscher retinopathy, such as cotton-wool spots, retinal hemorrhages and, less frequently, lesions resembling Purtscher flecken[35]. Disseminated lipase after systemic injury can also result in a retinal vasculitis that leads to thrombosis and vascular occlusion[9].


Regarding the pathognomonic Purtscher flecken, it has been previously stated that they appear in the superficial retina, with a clear demarcating line between the whitened affected retina and the normal retina adjacent to the retinal vessels. This clear zone corresponds to the capillary free area, which extends approximately 50µm on either side of the retinal arteries and precapillary arteries[24]. The existence of this demarcating line in patients with Purtscher retinopathy suggests that the primary pathogenic process lies within the precapillary arterioles. If the emboli were large they would occlude the proximal part of retinal arteries, resulting in the confluent retinal whitening that is present in patients with branch retinal artery occlusion. On the other hand, if the emboli were small they would occlude the distal part of retinal capillaries, resulting in the funduscopic appearance of cotton-wool spots.

Potential emboli vary in their origin, depending on the clinical context that caused the disease. They include air, fat, leukocyte aggregates, platelets, and fibrin. But they can also include other particles, given the fact that Purtscher disease has been elicited after both retrobulbar anesthesia[16] and orbital injection of suspended steroid particles[15]. Regarding fat embolism, it usually occurs after long bone fracture, surgery and pancreatitis, when there are fat emboli released from the intramedullary fat into the venous circulation. However, fat emboli are usually 5-10µm in diameter, which makes them too small to occlude the 45µm diameter precapillary arterioles. They would on the contrary be able to occlude the smaller 5µm retinal capillaries. For that reason, cotton-wool spots and/or retinal hemorrhages have been noted in 4% of patients with long bone fracture, but Purtscher flecken were absent[11]. Fat embolism syndrome is a rare complication of trauma, even if the release of fat into the systemic circulation may be common after trauma. It comprises a collection of signs and symptoms that occur within 12-36 hours of the event (either long bone fracture, orthopedic surgery, chest compression). The systemic manifestations result from the presence of fat emboli within the systemic circulation, associated with elevation of plasma lipase (that leads to saponification of lipid stores), vasculitis induced by free fatty acids, hypovolemia, coagulation, and complement activation. Complement activation may induce the formation of leukocytes aggregates (up to 50µm in diameter) which are large enough to induce precapillary arteriolar occlusion in retinal vessels[36]. Complement activation has been proven to occur in several diseases associated with Purtscher-like retinopathy, such as connective tissue disorders or renal failure.

Data from histopathology studies regarding Purtscher retinopathy are scarce due to the frequently benign natural history of this disease. Kincaid et al performed histopathology of the retina in a patient who died from acute pancreatitis[32]. They encountered focal areas of edema within the inner layers of the retina, with cystoid spaces and disruption of the normal architecture. Transition for the normal to the affected retina was abrupt. They did observe loss of photoreceptor segments, but the underlying retinal pigment epithelium and choroid were normal. Small hemorrhages were present in the outer plexiform layer. Electron micrographs revealed that small arterioles with narrowed lumen contained proteinaceous material located centrally; this was presumed to be consistent with recanalised thrombi. Holló et al published interesting results in a patient who died 6 days later from a necrotizing pancreatitis associated with Purtscher-like retinopathy[37]. Cotton-wool spots were similar to those of other etiologies, both in terms of histopathology and fundoscopic appearance. However, all the retinal vessels including vessels around and in the cotton-wool spots were intact and not obstructed, containing both plasma and red blood cells. The authors concluded that in cases of acute pancreatitis, vascular embolization with consequent vascular occlusion and endothelial damage is not necessary for the development of cotton-wool spots.

Currently there are no evidence based guidelines regarding treatment for Purtscher retinopathy, partially owed to the rarity of disease and heterogenous disease presentations. Several authors have published case reports with different therapeutic approaches.

The most commonly reported treatment is high-dose, intravenous steroids. Successful reports have been published by Wang et al[30] and Atabay et al[38]. Authors attributed the favorable visual outcome to the ability of high-dose corticosteroids to stabilize damaged neuronal membrane and microvascular channels. This enables partial recovery of neuronal fibers that have not been damaged irreversibly. Steroids also inhibit granulocyte aggregation and complement activation[39], which play a key role in the pathogenesis of this disease. However, the efficacy of steroids has not been established in prospective trials, and treatment with steroids is controversial.

Observation may be the most recommended therapeutic strategy. When known, treatment of the underlying condition (pancreatitis, etc) of Purtscher-like retinopathy should be paramount. Various authors[1][23][32], including the systematic review by Miguel et al[21], reported clearly that there is no statistically significant difference in visual acuity improvement between patients receiving high-dose corticosteroids and those receiving no specific treatment for the ocular lesions, with the added benefit of avoiding the adverse drug effects. This was true even for longer follow-up periods and regardless of the etiology[21].

Papaverine hydrochloride and [40]hyperbaric oxygen have been suggested, but evidence is limited and treatment cannot be recommended.

Agrawal et al reported that 54% of patients presented with a Snellen visual acuity of 6/60 or worse, with no significant difference between the three most common etiologies (road traffic accident, acute pancreatitis, and chest compression)[23]. Mean improvement in visual acuity was 2.7 (SD 3.6) Snellen lines, with no statistically difference between the three etiologies. Spontaneous visual recovery of at least 2 Snellen lines was seen in half of the cases. The authors also reported that patients with a worse visual acuity at presentation were more likely to still have acute changes at funduscopic examination at 1-month follow-up. The authors concluded that there may be a non-significant trend for the earlier resolution of the acute changes to be associated with a better initial and final visual outcome.