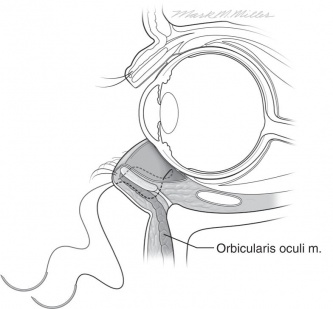 The Quickert procedure employs Quickert sutures for the treatment of Entropion. It is most often used in the setting of spastic entropion or early involutional entropion and was first described by Quickert and Rathbun in 1971. Quickert sutures tighten lower lid retractors. Accordingly, the safety, simplicity, quickness, and overall patient satisfaction have been cited as reasons to consider the Quickert procedure for patients in whom these features would be valuable, or patients with higher operative risk [1]

These results suggest that the Quickert procedure alone is inadequate in providing long-term repair of involutional entropion, but may be an appropriate choice for patients in whom the simplicity, obviation of the need for skin incision, minor complications, and ability to continue anticoagulation treatments of the procedure are valuable. Quickert sutures may also be safely employed to augment the more invasive surgical treatments of entropion, such as the inverted T and lateral tarsal strip procedures.