As the optic apparatus are radiosensitive structures[1], radiation optic neuropathy (RON) can occur up to years after treatment. RON presumed caused by delayed ischemic changes after radiation.

RON is typically characterized by sudden and irreversible unilateral or bilateral vision loss. The radiation treatment can be for head and neck tumors as well as intraocular, intraorbital, or intracranial lesions and can occur after radiation therapy for any tumor close to the optic nerve, optic chiasm, or optic tract.[2][3]

There is no specific radiation dose that has been deemed safe to avoid RON, but in general some radiation parameters have been proposed.[3] In general, if the total fractionated radiation dose is less than 5,000 centigrays (cGy), then RON is rare. If stereotactic radiosurgery (e.g. Gamma knife) is performed, single radiation doses of 800 to 1,000 cGy at a time (usually 1-3 sessions) are considered relatively safe.[4] Radiation doses from 5,000 – 6,000 cGy may produce RON with a risk of up to 5% within 10 years. Most RON, however, will present within 3 years of radiation treatment with a peak incidence after 1.5 years.[2]

Undergoing radiation therapy near the optic apparatus, the radiation dose, time between doses, and a patient’s age can influence RON incidence and severity.[3] Other chemotherapy in addition can also increase the chance for developing RON. Diabetic patients are more likely to develop RON, as they are more at risk for ischemic vascular disease.[2][4][5]

Development of RON could result from both radiation vasculitis, which is injury to the blood vessels, or direct radiation injury to the optic apparatus itself.[2] However, it is still unclear whether initial damage manifests in vasculature or nerve parenchyma.[6]

If possible, maintaining the absorbed fractionated radiation dose to £ 200 cGy per session and total dosimetry £ 5,400 cGy during fractionated radiation therapy could decrease the risk for RON.[2][4] For gamma knife radiosurgery in the optic apparatus, about 8,000 – 10,000 cGy is speculated to be relatively safe due to its ability to avoid damaging adjacent tissues.[8][9]

As described previously, the patient will have a history of radiation therapy around the optic apparatus.[2] It is important to recognize this radiation complication early. Retrobulbar optic nerve and chiasm are generally affected, therefore the optic nerve frequently looks normal at onset. However, it can present as acute (during therapy), early-delayed (3 months post-exposure), or late-delayed (6 months-10 years post-exposure).[7] It is not unusual for presentation to appear after a 3-month latency, but RON will most commonly manifest within 8 to 16 months after therapy. RON becomes rarer after 3 years, but it is still possible.[6]

The patient may complain of progressive but rapid vision loss over a few weeks. Initial presentation can be unilateral or bilateral.[4][7] However, symptoms are usually painless.[3] If both eyes become involved, symptoms in the second eye will develop within weeks of the initial decreased acuity.[2][3] In addition to decreased visual acuity, color vision loss is also a common presentation.[2][7]

Upon funduscopic exam, the optic nerve could look normal or paleand or disc swelling with an anterior RON.[5] [2] If the cause is anterior ischemic optic neuropathy, then disc edema will be present along with hemorrhage and microangiopathy.[4][10] After 4 to 6 weeks, optic pallor is demonstrated on exam. Lastly, simultaneous radiation retinopathy can present.[2][5]

An MRI of the Brain and orbit with and without contrast as well as fat suppression can enhance the involved optic. However, as the image through the optic chiasm may be limited to one slice, pathology may be overlooked.[2] Therefore, it is important to specify that small cuts3T (3mm or less) are needed. Additionally, early on MRI cannot differentiate RON from a recurrent tumor.[4] Communicating the clinical presentation to the radiology specialist may yield to a more efficient location of the pathology. 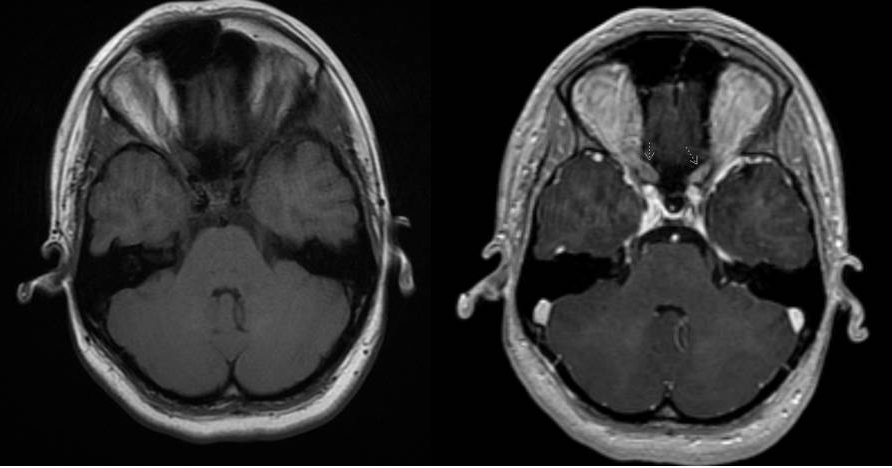 Figure 1. T1 pre and post contrast MRI of the brain with and without contrast prominence and enhancement of prechiasmatic optic nerves post radiation induced optic neuropathy after resection and radiation for suprasellar germ cell tumor (Courtesy of Nagham Al-Zubidi, MD.)

A lumbar puncture may also be performed in order to assess for other etiologies such as meningeal carcinomatosis, in which a tumor spreads to the meninges. Serology could also test for paraneoplastic syndromes, in which there is an immune system response against the optic nerve.[2]

Currently, there is no universally accepted therapy. However, different strategies have been proven effective.

Systemic corticosteroids and anticoagulation with heparin or warfarin have unfortunately not been proven successful for RON.[12] Corticosteroids are meant to decrease edema and demyelination, while the purpose of anticoagulants is to impede vascular injury.[4][6]

Anti-vascular endothelial growth factor (VEGF) molecules, however, have proven promising. As a monoclonal antibody directed against VEGF, the purpose of this treatment is to decrease hemorrhage and edema. Systemic bevacizumab is administered through a single dose every 3 weeks for a total of 4 doses, while intravitreal bevacizumab is injected into the vitreous every 6-8 weeks for a minimum of 2 doses. This treatment has shown to stably improve visual acuity and color vision over 3 years.[4][13]

Hyperbaric oxygen therapy (HOT) is a controversial treatment for RON, as there is limited supportive literature. Thought to allow for angiogenesis and cease ischemic necrosis, nearly 100% oxygen between 2-3 atm is delivered through a pressurized chamber for 30-60 minutes about 72 hours after symptoms arise. HOT is generally safe and widely used; however, severe consequences like barotrauma, bronchopulmonary toxicity, and seizures have been reported. Some ocular adverse effects include dry eyes and a reversible myopic shift. Additionally, this treatment is very expensive and some of the patients were shown to have recurrent progression after stopping the HOT sessions.[4][6][12]

Angiotensin converting enzyme (ACE) inhibitors, a new prophylaxis treatment option, can begin 2 weeks after radiation for about 6 months. The mechanism is to decrease inflammatory cytokine release. However, the use of Ramipril has thus far only been indicated in rats.[4][6]

intravitreal triamcinolone acetonide injections into the vitreous when RON is diagnosed is meant to act as systemic steroids but more directly. Visual acuity improvements have been noted in literature but no long term follow ups have been explored.[4][7]

Additionaly, in vitro studies showed that combination of vitamin E use lead to decrease in production of reactive oxygen and may impaire fibrosis and, Pentoxifylline (Trental) a methylxanthine derivative that modify blood viscosity and may help improve circulation have promising results

Prognosis is usually poor, as the eye affected with RON will have a visual acuity < 20/200 to light perception in 45% of eyes. As the most extreme consequence, there is potential for permanent blindness either unilaterally or bilaterally.[2][6]

Therefore, preventative measures and awareness of RON should be the guide to treating patients with tumors in or around the visual pathways. Continuing to create advanced technology to decrease the tissue damage of radiation or establishing an international registry to enhance the current clinical profile might be the best treatment.[6][7][12]